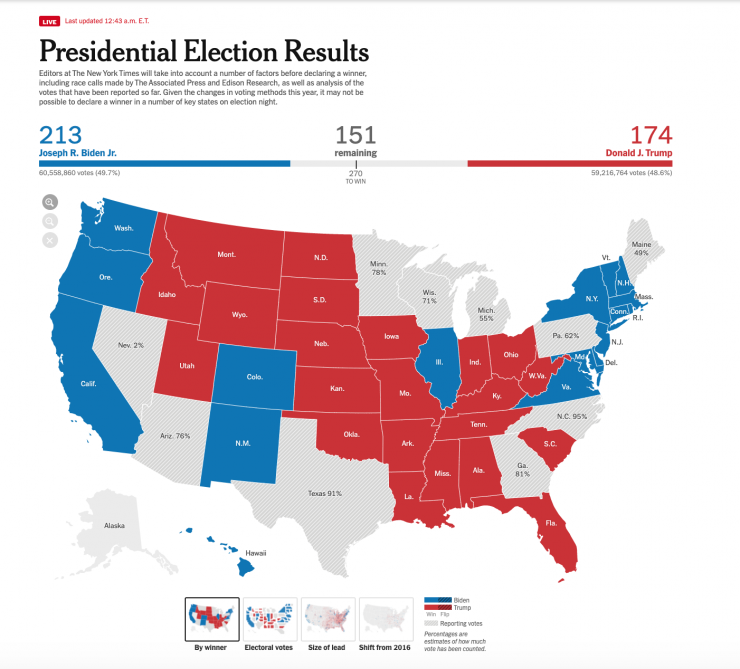 Too soon to tell: 2020’s president still to be determined

As early Wednesday morning swept in, tens of millions of votes are yet to be counted. Election officials are working through the night to declare a presidential winner.

The presidential race was not called by 1 a.m. Wednesday. Democratic nominee Joseph R. Biden Jr. led with at least 213 electoral votes, and 270 are needed to win the White House.

The race is closer than early polls predicted. Republican nominee Donald J. Trump has a growing lead in the South, and Biden swept the west coast. Important swing states – like Pennsylvania and North Carolina – were too close to call. As midnight came and went, the country continued to wait.

All polls are closed, and election officials are working tirelessly to declare presidential results as fast as possible. Tens of millions of votes are yet to be counted. It could take days to determine key states’ winners.

In the meantime, let’s take a look at the candidates’ political histories.

Against the backdrop of a global pandemic, an economic recession, climate change, natural disasters and anti-police brutality protests, Biden characterizes himself as a hopeful unifier set on saving the nation’s soul.

“This campaign isn’t just about winning votes,” Biden said in his nomination speech at the Democratic National Convention in August. “It’s about winning the heart and, yes, the soul of America.”

If he wins, Biden’s vice president will be Sen. Kamala Harris, D-C.A. Before naming her as his running mate, Harris attacked Biden on stage during a presidential debate for opposing court-ordered busing–an effort to desegregate schools–in the 1970s.

Harris, who is biracial, made history as the first Black woman and first Asian-American woman to receive a vice presidential nomination.

Biden served as vice president under Barack Obama, the 44th president, for two terms. He was a Democratic senator in Delaware for 36 years, the fifth-youngest person elected to the Senate.

A Biden presidency is slated to undo the work of the Trump Administration.

As president, Biden pledges to expand the Affordable Care Act to give all Americans healthcare access, end the separation of children at the U.S.-Mexico border, end the travel ban against people from Muslim-majority countries and re-enter the Iran Nuclear Deal.

He also promised to rejoin the World Health Organization and the Paris Climate Accord, which Trump pulled the United States from in November 2019. As the only country not a part of the agreement, the United States emits the second-highest amount of greenhouse gases, behind China.

Biden said that under his administration, Americans would be required to wear face masks and able to access free coronavirus testing. He will also increase the production of masks, face shields and other personal protective equipment. He will create a Nationwide Pandemic Dashboard and a COVID-19 Racial and Ethnic Disparities Task Force.

Trump, who contracted COVID-19 in October, has repeatedly downplayed the severity of the pandemic. At an outdoor campaign rally in Swanton, Ohio, Trump told a crowd that the coronavirus “affects virtually nobody.”

At a drive-in campaign rally in Philadelphia on Saturday, Biden, who has sharply criticized the administration’s handling of the pandemic, accused Trump of asking Americans to learn how to die with the coronavirus rather than live with it.

If he wins reelection, Trump’s vice president will continue to be former Governor of Indiana Michael Pence, who has led the White House Coronavirus Task Force since February.

The Trump campaign unveiled a second-term agenda in late August. Aside from coronavirus-related goals–like creating a vaccine by the end of 2020 and returning to normal in 2021–Trump wants to expand the police force, block undocumented immigrants from receiving healthcare and welfare, launch Space Force and dismantle human trafficking networks.

However, ideas like “build the world’s greatest infrastructure system” and “wipe out global terrorists who threaten harm to Americans” lack clear plans.

In the final weeks of his campaign, Trump has faced growing criticism for violating the Centers for Disease Control and Prevention’s guidelines prohibiting maskless rallies and events. A recent Stanford University study linked over 30,000 COVID-19 cases and 700 deaths to his events.

Trump, who has repeatedly downplayed the severity of the illness, was admitted to Walter Reed Medical Center in Bethesda, Maryland, after contracting COVID-19. He was discharged from the medical center three days after his doctors first downplayed his symptoms.

Trump said Sunday he will fire Dr. Anthony Fauci, the country’s leading infectious-disease expert, when elected for his second term. He has continually mocked Biden for listening to scientists, wearing a mask at events and keeping distance between himself and others.

Trump has come up against numerous controversies during his first term as president.

According to recent New York Times reporting, Trump has paid $750 in federal income taxes during his first two years in office. Trump’s net worth decreased since taking office from over $3 billion to about $2.5 billion.

The Democrat-controlled House of Representatives, led by Speaker of the House Nancy Pelosi, impeached Trump in December 2019 for abuse of power and obstruction of Congress. The House accused Trump of using his power to solicit Ukraine into investigating Democratic opponents to discredit them. The Republican-controlled Senate did not vote to remove him from office.

During his first week in office, Trump signed an Executive Order banning refugees from seven predominantly Muslim countries from visiting the United States for 90 days, indefinitely suspending Syrian refugees’ entry into the country and prohibiting all other refugees from entering the country for 120 days. This decision was met with outrage. The House of Representatives reversed this ruling in July.

Trump had never been in public office before taking the presidency. As a decades-long television star and real estate developer, supporters say part of the appeal is his background.

Trump profited off properties he owns or manages during his first term, and he donated his annual $400,000 salary each quarter to different agencies. Since the president is required to be compensated, he took $1 a year for all four years.