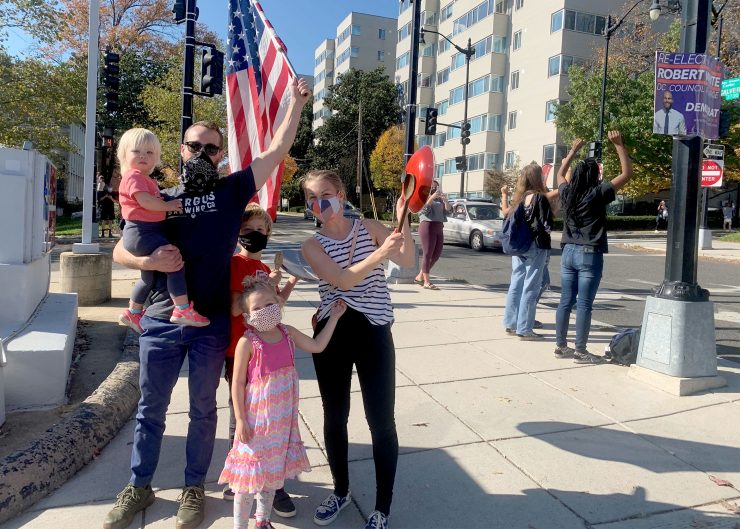 A woman was on the phone as she walked along the Georgetown waterfront just after 11:25 a.m.

“284! 284!” she said, which is the number of electoral votes president-elect Joe Biden had won when the Associated Press called the race in his favor late Saturday morning.

Over 90% of D.C. voters cast their ballots for Biden, according the Washington D.C. Board of Elections. About 5% voted for President Trump. Biden’s proportion of the vote was slightly smaller in Ward 2 and Ward 3, which include Georgetown, where the president-elect picked up about 89% of the vote in each ward.

As the news spread, honks could be heard echoing from M street, where pedestrians and passing drivers simultaneously celebrated the results.

A man driving a car with a Joe Biden bumper sticker on the back cheerfully honked while driving up 35th Street.

A few blocks over near the intersection of 37th Street NW and Whitehaven Parkway NW, someone had written “Biden,” “safety at last” and “we won” in blue sidewalk chalk in front of their home. A prayer candle with a photo of president-elect Biden and a figurine of the late Supreme Court Justice Ruth Bader Ginsburg had been placed on the front steps leading to their walkway. The words “Biden Won” were written underneath in the same blue chalk.

Meanwhile, similar celebrations took place all over the United States. NBC New York reported that spontaneous cheers broke out around the city when the news broke. Similar scenes have been reported in Philadelphia where residents have been celebrating since Friday when president-elect Biden took the lead in Pennsylvania.

Back in D.C., a group of about 20 residents had gathered at the intersection of Calvert Street NW and Wisconsin Avenue around 1 p.m., cheering to the sound of car horns and wooden spoons on pots and pans.

Natalie Davis stood on the corner with her husband and three children. They were at a birthday party in another D.C. park when the AP called the race for Biden. Davis said a woman drove by in a minivan screaming that Kamala Harris was now the vice president. The entire party erupted in cheers, she said.

After driving home and grabbing some kitchen pans and spoons, the five of them stood on the corner of Calvert and Wisconsin celebrating with the passing traffic.

Davis said the four days since the election have been tense. She said her family were “holding our breath.”

“(It was) also really disappointing at first, thinking people were okay with everything staying the same,” Davis said.

Votes cast the day of the election were counted first in many states, giving President Trump a perceived lead election night. That lead began to shrink in the days that followed as states like Pennsylvania and Georgia began counting mail-in and absentee ballots cast prior to Nov. 2.

Kenza Coulibaly, Geneva Jacobs and Keyla Sejas all stood on the same corner. They were on a Metro bus when they heard the news. When the celebrations started, they decided to join in.

All three of the girls are too young to vote, but Coulibaly said her mother voted for president-elect Biden – her mother’s first vote as a U.S. citizen.

But watching this election as minors hasn’t been easy, they said. Coulibaly said she talked to her family, encouraging them to vote this year. Sejas said she phone banked, but mostly they said it felt like the results of this election were in other people’s hands.

“It felt really anxious because you didn’t know who voted for who and you can’t do anything about it,” Coulibaly said.

As of 5 p.m. Saturday, President Trump had yet to concede the election. In a statement earlier that day, he had promised additional legal challenges to the results of the election. Since Tuesday, the Trump campaign and its surrogates have launched a series of lawsuits challenging vote counting procedures in Arizona, Nevada, Pennsylvania, Michigan and Georgia.

Judges have been skeptical of Republican’s arguments, however. A judge denied a request to stop counting votes in Clark County, Nevada, until ballot signatures could be checked by hand as opposed to a computer software Friday evening. The Trump campaign is not a party on that lawsuit, but touted it earlier this week.

Georgetown residents’ spirits weren’t dampened by the possibility of future litigation. Sejas said she would keep celebrating, at least until her voice gave out.