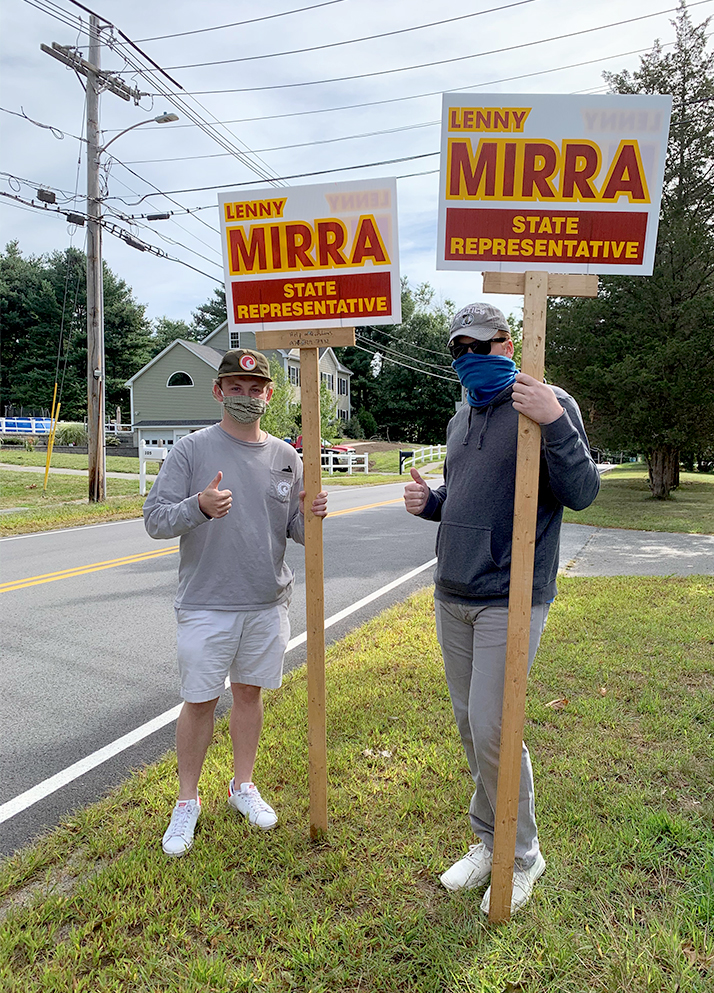 John Olds said he wouldn’t trade his senior year at George Washington University for anything. He studies political science and economics and he is slated to graduate this spring. But there is one silver lining to spending his last year in college online, he said.

At 21, he got to manage a political campaign.

After going home to Merrimac, Massachusetts, when GW initially closed its campus in March, Olds said he was scrambling to find work. He had an internship lined up, but that fell through. So, on a whim, he sent a message to his state representative, Lenny Mirra.

Olds, a member of the GW College Republicans, said if he had been on campus this fall, he likely would have volunteered on a campaign, but he wouldn’t have been able to secure a management position.

He said he scheduled campaign meetings around his class schedule, something that would make those he was working with chuckle. That said, the flexibility of online classes and GW’s decision to cancel classes on Election Day gave Burland more time to focus on his campaign work.

“It was extremely personally beneficial,” Burland said. “Obviously I developed more relationships in the area and I got a really hands-on experience at a really interesting time.”

Although Burland’s candidate, Mike Southworth, didn’t win his bid to represent Connecticut’s 14th District in the state senate, he said the experience was extremely beneficial and likely one he wouldn’t have gotten if he had been on campus this fall.

“If I was at school for GW I would have probably been helping out with some of the campaigns in Virginia or in Maryland,” Burland said.

According to a poll from Tufts University, three times as many young people volunteered for a political campaign during the 2020 election cycle than the 2018 midterm election.

The survey lists a range of reasons for that uptick – increased activity around social issues and the presidential race chief among them – but for students like Olds and Burland, geography was a primary contributor.

As for two other GW students, Cordelia Scales and Melanie Campbell, their proximity to their home districts this semester allowed them to volunteer at local poll stations.

Campbell, a Pittsburg resident, worked at a poll station around the corner from the grocery store where she works. She helped sign in her coworkers to vote and worked with another student who was also home due to campus closures.

“I’m really happy I got to do it,” Campbell said. “I would definitely do it again if I had the chance.”

After a decrease in election workers during the primary elections in the spring caused fewer numbers of polling locations and longer lines, local and national leaders put out a call for a younger cadre of election volunteers. And, for the most part, young people responded.

“I know in my town most of the polls workers are aged 65 and up so they are at a significantly higher risk for the virus,” Scales said. “There is no early voting in New Hampshire, so it’s always lots of people. So, I wanted to keep them safe.”

Working on a local campaign during a divisive election wasn’t always easy, nor was volunteering to work at polling locations during a pandemic.

Campbell said she was nervous voters wouldn’t respect the regulations local election officials had adopted. Meanwhile, Burland said he had to have sometimes tough conversations with voters who were also his friends and neighbors.

But both said that’s what made the experience important.

“You’re more invested in it because you can kind of measure the impact that things you do have on your community,” Burland said.

Many also noted how different their communities are than the environment they would have been exposed to in D.C.

“It was a different atmosphere in D.C.,” Campbell said. “Pennsylvania was obviously super polarized and divided.”
Olds said one of the primary benefits of the experience was getting to see the election from outside what he called the hyper-engaged D.C. bubble.

“D.C. is very unrepresentative of the rest of the country,” Olds said. “And learning to be a political scientist when living in the D.C. bubble can lead to drawing wrong conclusions about what Americans are actually thinking.”

Going forward, all four students said they would like to stay engaged with politics, both local and national. Scales and Campbell are both members of GW’s College Democrats. Campbell leads the organization’s progressive caucus.

As for Olds and Burland, they hope their sometimes differing perspectives, especially on race and climate change, are heard by older members of their party.

“We were the ones sometimes who stepped up, working the polls to make sure that elections worked smoothly,” Burland said. “We were the ones on the ground … and we have concerns that not all Republicans share.”