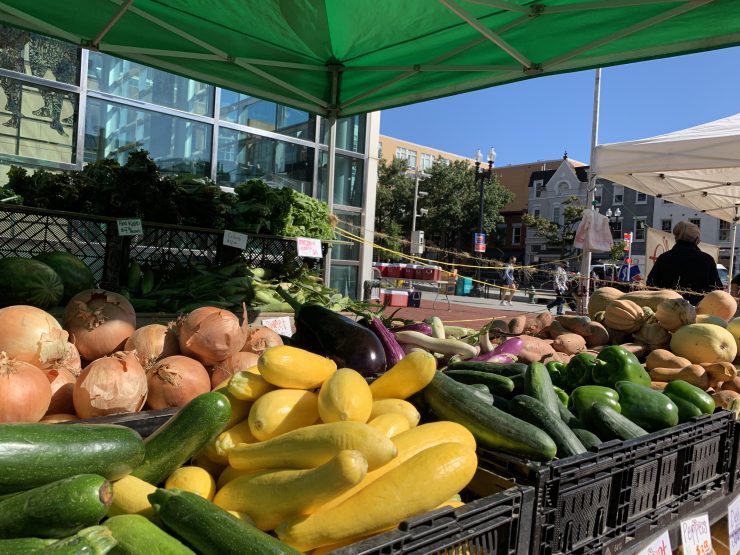 The city’s online-only, recently-closed public life survey received almost 4,500 responses about current and future use of the space around the Reeves Center, which sits at 14th & U Street. The input will inform the soon-to-be-released request for proposal, which will help determine redevelopment.

The Office of Planning recently concluded an online-only public life survey to learn how residents use the space around the Reeves Center, a government office building that sits on 14th & U Street. Two government agencies promise to analyze the responses over the next few weeks and share them with the public.

Among other questions, the survey asked for ideas regarding future designs of the space, how often residents came through the area, and the kinds of events that passersby attended.

Many residents and government offices see this location as one of the most important and critical intersections of the city, said Kevin Storm, the Office of Planning’s associate director of urban design.

The Office of Planning, or OP, is working to see how public life and the use of space intersect at the 14th & U Street Corridor, Storm said. The Office of the Deputy Mayor for Planning and Economic Development, or DMPED, works along the OP to complete this project.

Storm highlighted the history and culture of the building, which is named after Frank D. Reeves, a lawyer and civil rights activist who fought to outlaw school segregation. Spontaneous protests, vigils, and cultural celebrations often pop up on the plaza outside of the Center, and the OP wants to accommodate for those events to happen with the city’s help.

“The OP is trying to infuse how people use the space in front of Reeves and how it contributes to public life and the success of public space in the district,” Storm said. “The intersection is a focal point of the city for celebrations and protests, and we have to take those factors into account.”

This survey – which accepted responses from Sept. 15 to Sept. 30 – was done entirely online to take precaution amid the coronavirus pandemic, Storm said.

In the past, the city has done public life studies mostly or entirely in person. Usually, 10 to 15 individuals from the OP will stand in the area and ask passersby about their use of the space, Storm said. For variety, questionnaires would be completed both morning and evening and on weekends and weekdays.

“The survey responses will require an asterisk since we’re not asking people who are at that intersection seven days a week coming by during rush hour. But we have to do something to understand the space,” said Robb Hudson, a commissioner for ANC1B, which includes the 14th & U Street intersection.

The results of the multiple-choice questions will be aggregated in a report. Answers to the open-ended questions will be analyzed and summarized generally, Alemayehu said. The report will be posted on the OP’s website in the next few weeks.

ANC1B partnered with DMPED to workshop the survey questions to get the best results, Hudson said. While the survey received a high number of responses, some users felt that its length could have hindered some residents from completing it.

“There were really good questions about space use, but they need to work on condensing the questions, so more people are incentivized to respond,” Clara McGinn, assistant manager of the 14&U Farmers’ Market, said. “The people who didn’t respond may have different points of view.”

The 14th&U Farmers’ Market operates on the plaza outside of the Reeves Center every Saturday morning from May to November. Some of its employees did not know about the survey until they were approached by The Wash. Others said that they enthusiastically it out when a market manager emailed it to them.

Many vendors told The Wash they want more garbage and recycling bins, as well as an always-open public restroom.

Next, DMPED will release a request for proposal. This should be within the next month, Jessica Carroll, DMPED’s public affairs specialist, said.

DMPED will “prioritize equity inclusion” in choosing the organization that will take over the Reeves Center’s space, favoring organizations that are owned or controlled by individuals who are a “part of a socially disadvantaged population.”

The NAACP signed a letter of intent in June to use the Reeves Center as its new national headquarters, though Hudson said this does not mean that the organization will definitely respond to the request.

“The NAACP is the exact type of business we want to have occupying that building,” Hudson said. “It’s the perfect match. A historic, perfect match.”

The NAACP did not respond to repeated attempts for comment.