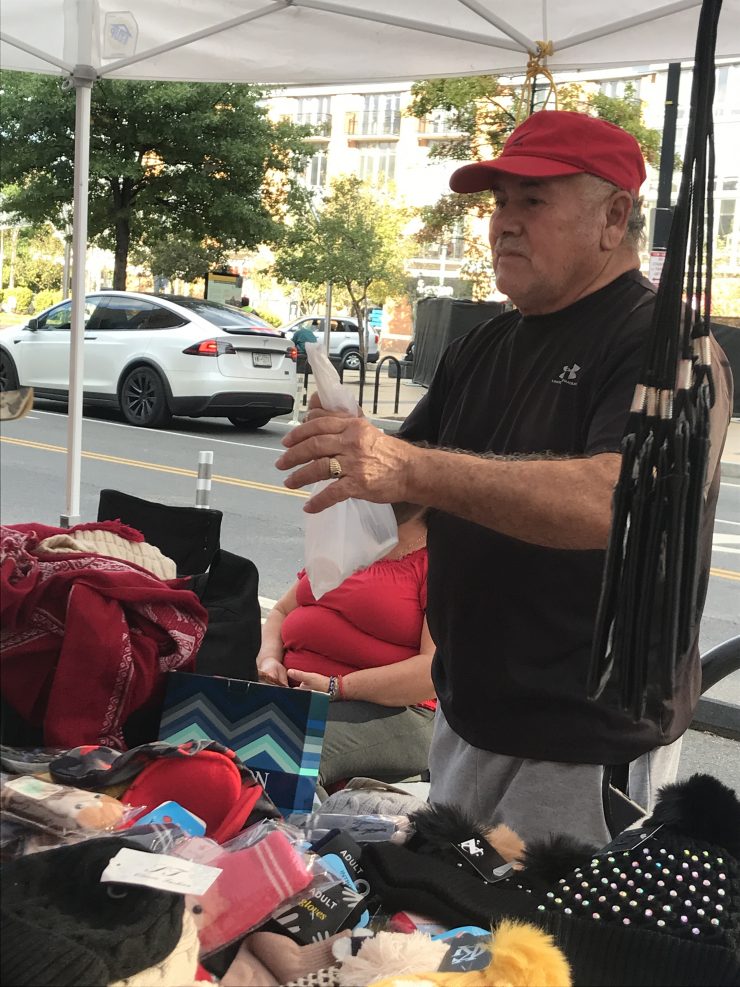 Members of the D.C. Council next month are scheduled to consider bills to decriminalize street vendors who operate without a license and to create a street vending zone in Columbia Heights.

Vendors welcome the bills, introduced by Ward 1 Councilmember Brianne Nadeau, but say they hope the effort doesn’t stop there. These vendors say they need a path toward a license.

The smell of fresh empanadas, the loud music from temporary stands, and the call to buy coconuts or papaya are impossible to ignore when exiting the Columbia Heights Metro station. Street vendors became part of the neighborhood’s landscape through the years, and two bills could make them permanent.

The full council will hold a public hearing on both bills Nov. 16 to hear the voices of anyone interested in these bills.

Under current law, street vendors may not sell on the sidewalks without a license or a permit. They face a maximum of 90 days in prison and a $500 fine if they do not comply with the license requirements.

“Decriminalization is a lazy legislation,” said Matt Geller, the founding president of the National Food Truck Association. “What we need is a pathway to permits.”

He said that decriminalization doesn’t change anything except helping unlicensed vendors avoid being arrested. However, he acknowledged that a bill to give street vendors the possibility to get permits is complicated and challenging, as several agencies would need to find a middle ground.

“We need a license to sell without worries,” said Miguel Perez, a street vendor on 14th Street. “When the cops come to the corner, everyone runs, and for me this is not right.” Although he is retired, the money he receives is not enough to survive. Perez said he sells to pay his $1,800 rent and to cover the expenses of his disabled wife.

“With a license, we would be happy,” he said.

Nadeau also introduced a companion bill, the Columbia Heights Sidewalk Vending Zone 2021. The bill would create two types of licenses, an individual and a vending zone manager license, according to Nadeau’s press release.

Both bills would allow for a managed vending zone in Columbia Heights, which would ensure everyone could enjoy the offerings of the vendors while still being able to access the sidewalks and other businesses along 14th Street, the councilwoman said in an email. She agreed that this bill would be a pathway to permits.

14th Street is known to be the heart of Columbia Heights and a place with various street vendors. Because many are not registered, a precise number of street vendors is not available.

An incident in 2019 led Nadeau to introduce the two bills. A 10- and 15-year-old were confronted by the police at 14th Street, leaving one of them injured. A video became viral and revived the debates around decriminalization and vending permits. These bills would prevent negative police encounters, Nadeau said in a press release.

“Because of that, I stopped selling for a while,” said Salvador-born Maria Cruz. “It scares me to fall into the immigration because I don’t want it in my record.”

Cruz said wakes up every morning at 1 a.m and prepares food based on yucca, platanus, corn, and packs up fruits such as melon, papaya, and mango. She also said she supports more vital legislation for street vendors, and these new bills could be a start.

“We need formality,” said Chris Rodriguez, who sells Argentinian empanadas. “Some stands are big and others smaller, we need to be all equal.” He said he has been selling every Friday and Saturday for four years at 14th Street. He is not afraid of the police, he said, and he will just follow what the mayor decides.

Both bills still have a long way to go. After the public hearing this November, they have to go through a final reading, mayoral review, and a congressional review to end up, maybe, as a law.