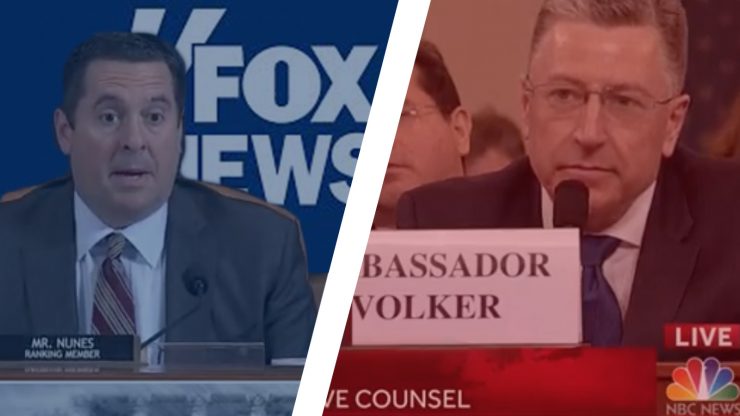 There are two sides to every impeachment story, but where is the truth?

Hannity: ‘There was no quid, no pro, no quo’

Lawmakers are holding hearings to figure out if Trump abused his power by pressuring Ukrainian President Volodymyr Zelensky to investigate his political rivals in a July call. But Hannity defended the president by citing the rough transcript, saying that Trump never said that he would restrict foreign aid. While it is not explicitly mentioned in the rough transcript, the Washington Post reported Trump ordered a hold on military aid to Ukraine days before the call.

Hannity rejected the witness’ testimony and insisted the only witness the American people need to hear from is the whistleblower.

“Not one witness was necessary, not a single one,” Hannity said. “There was no quid, no pro, no quo, no pressure, no extortion.”

As the show continued, Hannity said Americans don’t care about the impeachment hearings because fewer people have been watching the hearings on TV than those who tuned into former President Richard Nixon’s impeachment proceedings 45 years ago. (About 13 million Americans watched the first impeachment hearing Nov. 13, according to Nielsen. But “tens of millions” watched unedited tapes of the 1973 impeachment hearings that led to Nixon’s resignation, Business Insider reported.)

However, it’s difficult to tell how many people watched livestream videos of the hearings as Nielsen doesn’t track that data.

The guests on his program included Rep. Jim Jordan, who questioned each of the witnesses at the hearings, and the president’s son Donald Trump Jr.

Lt. Col. Alexander Vindman and National Security Council advisor Tim Morrison discussed their knowledge of Trump’s relationship to Ukraine in the morning. Jennifer Williams, an aid to Vice President Mike Pence, followed in the afternoon talking about what she overheard during the Trump-Zelensky phone call. Williams said she found the call unusual because it included a discussion of a “domestic political matter.”

According to Maddow, the testimony had not gone the way House Republicans hoped, given that the witnesses were Trump-appointed officials that the Republicans had selected to speak. Their testimony, she said, only served to prove that Trump was guilty of bribery.

“Their testimony wasn’t awesome for the president’s defense,” Maddow said.

Maddow then went on to discuss how the witnesses each played a part in constructing a narrative of Trump’s guilt.

“They’re all fleshing out different parts of the story,” Maddow said, “but it’s one singular story about what the president did and what was wrong with it.”

Maddow’s approach, of a spectator parsing the statements from the hearings, could not be more starkly different than Hannity’s broad condemnation of the entire impeachment process. While Maddow unpacked what was said and used it to confirm her assertions about the president, Hannity did not treat the hearings or the witnesses as legitimate. He focused on perceived apathy toward the hearings by Americans, using metrics like TV ratings and polls about support, in order to drive his message home.

This, however, is in keeping with how Fox News has run for some time, according to Steven Livingston, a media professor at George Washington University.

“I think that will continue until Trump ends up being more of a liability for the right-wing cause,” Livingston said. “What’s going to have to happen is Republican senators would have to start breaking from Trump. At some point, Fox News could start being the lone Trump voice.”

The potential for Fox News commentators to flip on Trump may involve a shifting of focus, rather than of position, according to Peter Loge, associate media professor at George Washington University.

“They could say Trump has to step down and let Pence pick up where he left off, because the distraction of impeachment might trick people into voting for a Democrat,” Loge said.

While MSNBC and Fox represent different ends of the political spectrum, they’re not necessarily ideological opposites.

“It has become whiter and more conservative in the Trump era,” Hemmer wrote about the network. “Melissa Harris-Perry and Al Sharpton are both out at the network, while Nicolle Wallace, White House director of communications under George W. Bush, now anchors the 4 p.m. hour.”