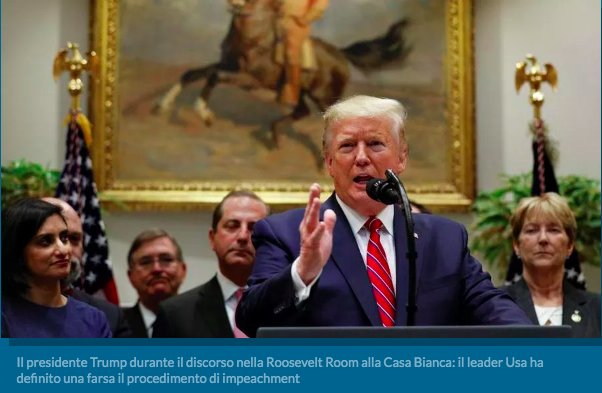 European countries like Italy are influenced by American politics and culture, and the impeachment inquiry is no exception.

The details of the impeachment inquiry are difficult to keep up with, but the global influence of America’s political turmoil is profound. Take it from a country with strong ties to the U.S. since World War II.

“Americans don’t realize the great influence they have,” said Francesco Costa, an Italian journalist based in Milan who covers American news and foreign policy.

And in the same year that Barack Obama ran his presidential campaign with the slogan “Yes we can,” Rome’s mayor Walter Veltroni, the losing candidate, took on right-wing leader Silvio Berlusconi in Italy’s race for prime minister with the slogan “Si può fare,” a direct translation of “Yes we can.”

Costa’s newsletter has 15,000 subscribers, and his podcast has 20,000 listeners. While these numbers may seem small in an American market, in an Italian market they are significant, especially considering the content is international. La Stampa, a major Italitan news outlet, often refers to podcasts as an “American trend.” There were about 2.7 million podcast listeners in Italy in 2018, according to data from Statista.

And the impeachment inquiry into Trump, although still in the early stages, has worldwide consequences, he said.

“When President Trump feels under attack, he becomes aggressive on tariffs, immigration,” which impacts European trade and relations with the United States, Costa said, reflecting the views of political leaders and experts in Italy.

But if Trump is removed from office, Italy would benefit from a “more calm, more rational” American administration. For example, Trump has suggested European countries were taking advantage of the U.S. and not paying their NATO contribution, CBS News reported.

Giorgio Fruscione, a researcher on Europe and global governance, said the relationship between Trump’s administration and Europe has been more strained than previous administrations. Other policy experts believe the impeachment process poses a problem for the 2020 presidential elections.

Franco Bruni, vice president of the Italian Institute for International Political Studies, said Trump and his political opponents will continue to discuss impeachment throughout their campaigns, which is “much less interesting than discussion on health care systems, education.”

“We experience Trump fatigue,” Costa said of the scandals pouring out of the United States and into his purview as a foreign policy journalist, though “we are not an example of stability in government.”

In the parliamentary system of Italy, the prime minister can be cast out with a single vote from the Italian parliament, as opposed to individual votes from the House of Representatives and the Senate – two bodies of Congress that are often opposed to each other based along party lines.

Impeachment is a “traumatic thing that never really happens” for the American people, said Costa. It is increasing polarization and encouraging right-wing radicalism, according to Costa.

People are “more angry, more intolerant,” Costa said. And this attitude is spilling into European politics. Nationalism on the rise across the Atlantic, mirroring America’s era of Trump politics.

Trump’s removal from office would be a big story, even in a country run by two anti-establishment parties facing a struggling economy.

Some interviews were translated from Italian to English by the author.