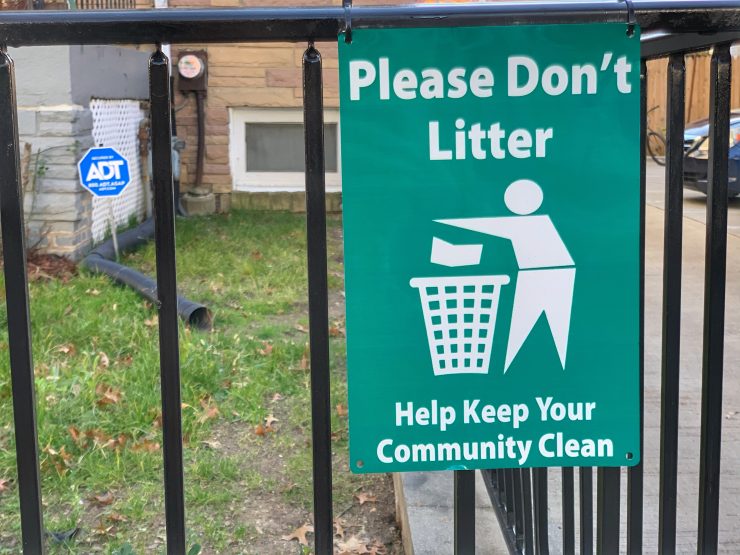 Litter has plagued many D.C. streets and alleys for years, and over the last eight months, the pandemic has only exacerbated the issue. Now, a new government initiative is testing a strategy to promote proper trash disposal, and they’re handing out stickers to do it.

The U.S. Environmental Protection Agency’s (USEPA) Trash Free Waters Program, in partnership with the District, is piloting a research project this winter to reduce litter in some of the city’s most densely populated areas. Park View and a northern section of Columbia Heights are among the handful of neighborhoods participating in the project that, if successful, will likely be replicated in other cities.

In November, the Mayor’s Office of the Clean City, which is carrying out the project’s groundwork while USEPA funds it, handed out 8,000 informational garbage-bin stickers to single-family homes across the pre-selected neighborhoods. Made durable to last and large enough to notice, each sticker lists four concise recommendations to improve household trash disposal and reduce litter: bag all trash in the bin, always keep the lid closed tight, don’t put trash out until shortly before pickup, and for free bin repairs or replacements, residents can access 311 via phone or internet.

The stickers are meant to be applied to each garbage bin, explained Julie Lawson, director of the Mayor’s Office of the Clean City. “Where are you making those decisions? At the cans,” she said. It’s too easy for people to forget the recommendations when they’re not in front of the person as they’re deciding how to handle their trash. “That’s why putting the sticker on the can was important.”

But some residents are skeptical that the stickers will make any difference in the amount of litter and illegal dumping in their neighborhoods. Overflowing trash cans and abandoned bulk items like mattresses, left to deteriorate on street corners, are common in the alley by the 600 Block of Lamont St in Park View, according to Liz Furgurson.

A resident of Lamont St. NW for eight years, Furgurson said she’s “at her wit’s end” with the trash situation, bulk dumping and “rats the size of cats” in her back alley. She explained that the area behind her house has been a problem since she moved in, and that while she’s spoken to city officials time and time again over the years, nothing has changed.

Now that the city is taking some action to fix the rampant litter and dumping problem in some of these areas, Furgurson worries that it won’t be enough. Putting a sticker on a bin under the assumption that people just need to be trained how to dispose of their trash properly is a passive approach to what she considers a big problem.

“I’m at the stage where I’m just losing hope,” Furgurson said. “I’ve been here for eight years and it’s just not any better. And it’s something that I think about a lot.”

David Boyd, a Department of Public Works (DPW) employee and 30-year resident of Columbia Heights, is more optimistic about the potential success of the stickers. Working for the organization responsible for trash collection at the houses involved in the pilot project, Boyd said he regularly witnesses how people handle their trash and believes most of the problems begin with lack of education.

One example he offered was that of new residents moving to the community. Columbia Heights and Park View are two of the fastest-growing areas in the District, attracting a new, younger crowd. Many recent residents don’t know when trash day is, Boyd said, explaining how he saw a new neighbor put trash out on a Sunday even though collection is on Tuesdays. “During that time, you’re actually just feeding the rats,” Boyd said.

Doorknob hangers with information about trash day schedules and calling 311 are readily available at Boyd’s work, and so he’s made a point of hanging them on neighbors’ doors and helping to educate them.

Furgurson agrees that at least part of the issue comes from residents being uninformed, especially when it comes to the proper disposal of bulk items. “I have seven to eight mattresses in my alley right now,” she said. “People don’t understand that they’re supposed to call 311 for bulk collection. It’s free. It’s all they have to do. But just dragging [the mattresses] out into the alley and expecting them to just magically disappear isn’t working.”

The pilot project will continue into January, for another 10-12 weeks. During that time, Lawson and her team will continue to monitor the same streets and alleys they’ve been visiting since August, always careful to go at the same time, on the same day each week, to keep consistent with the methodology. Using a metric ranging from one to four (one meaning the alley could be cleaned by one person in a few minutes and four being someone should “call in the national guard,” as Lawson said) to track litter levels, the pilot project will be able to measure the effectiveness of the stickers and see what changes people have made to their trash disposal habits.

ANC1A Commissioner Michael Wray said what he’s excited about the research quality of the project. There will be data that can be analyzed, and if changes need to be made to the messaging of the project, there should be some indicators of where to adjust. The results of the study won’t be fully available until summer, but Lawson is planning to open the project up for public comments in December. The clean street initiative is a work in progress – a step in what Lawson and her team hope will be a positive direction.

“Even if this particular wording [on the stickers] isn’t what we keep doing, I think the idea behind it could be effective,” Wray said.