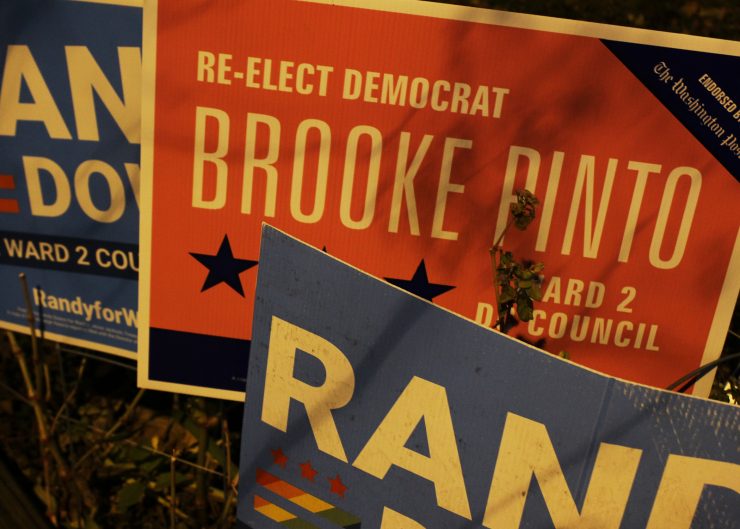 Pinto held onto her seat on the D.C. Council on Tuesday, winning about 68% of the vote. Her closest challenger was Randy Downs, a two-time ANC commissioner who has represented Q Street down to Pennsylvania Avenue since 2017. He earned 20% of the vote. Independent Martin Miguel Fernandez captured about 7% of votes and Green Party candidate Peter Bolton finished with 3%.

Outside the School Without Walls at Francis Stevens, where Aguiniga cast her ballot, Pinto said a win for her would mean that voters are happy with the representation they have received so far. Pinto was elected to the D.C. Council in June after winning a crowded Democratic primary earlier that month. That was after she previously won a special election in June to fill the seat vacated by Jack Evans, who resigned from the council in January amid an ethics scandal.

She is both the youngest member of the D.C. Council and the first woman for Ward 2. She’s run three campaigns this year. All of them during a pandemic.

“We didn’t do any door-to-door knocking to keep the safety of my team and the safety of our residents first and foremost,” Pinto said.

Instead, she made phone calls. During her primary campaign she said she consistently made 500 phone calls a day. Pinto said she wasn’t able to maintain that clip while performing her council duties, but continued to make calls on nights and weekends.

“It is all about connection with voters,” she said.

As for Downs, he emphasized his work in the community during the 10 years he’s been a resident of the District. He’s served two terms as an ANC commissioner and is an active member of D.C.’s LGBTQ community. Speaking before election results were tallied, Downs said he plans to continue to be involved in Ward 2 issues.

“Ward 2 is my home,” Downs said. “I have been here a decade and have been incredibly involved. I’m not going anywhere.”

Pinto was often cast as an outsider throughout the campaign. Pinto is from Connecticut and came to the District to attend Georgetown University Law School. After she graduated, she worked as an assistant D.C. attorney general.

Pinto, however, rejected that characterization.

“I moved here for law school, have been here ever since and will be here the rest of my life,” Pinto said.

Aguiniga said Pinto’s time in the District didn’t factor into her decision to cast her vote in the incumbent’s favor. Aguiniga said she, herself, is from Maryland.

In terms of priorities for her first full term in office, Pinto said they will be much the same as those she has had since she was elected – COVID-19 recovery for D.C. businesses, criminal justice reform and affordable housing.

“A win tonight,” she said about two hours before polls closed, “means that I should continue my laser focus.”