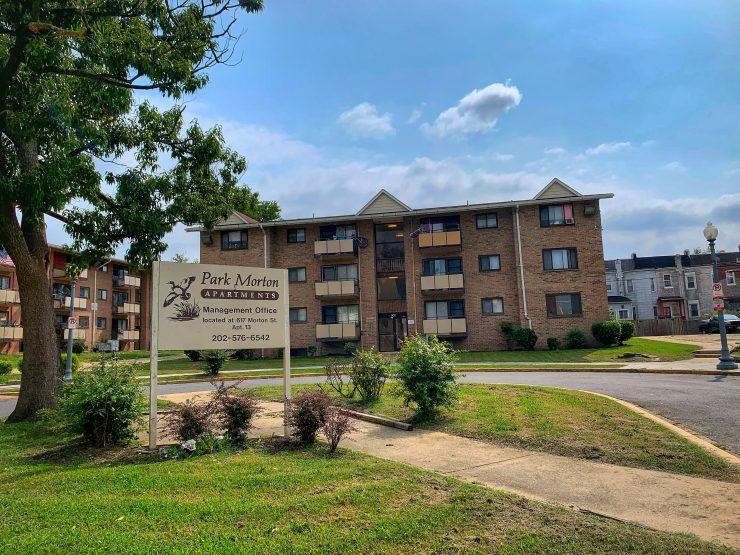 Panic spread among Park Morton residents Monday morning after an email circulated stating that the District of Columbia Housing Authority was planning to shut down a residential building, giving residents 30 days to move. DCHA later denied this, but residents still fear displacement with redevelopment on the horizon.

Several Park Morton community members woke Monday morning to a distressing email: residents of building 617 would have 30 days to move. For those who were already suspicious of claims that the redevelopment project is for the benefit of current residents, this email seemed to affirm their fears. However, the email update turned out to be false. The misreport was sent to community members by Park Morton’s Resident Council President, Shonta High, who said she was concerned for her residents. According to High, the information originally came from a property manager at the site.

Responding to the misinformation, DCHA spokesperson, Jose Sousa, dispelled the claims about a 30-day timeline in an email to the resident council and other involved parties. However, he also wrote that the Housing Authority is working with residents to help them choose relocation options. DCHA’s goal is that all families living in buildings slated for the first phase of redevelopment will be moved by the end of the year, Sousa wrote. Building 617 is part of that first phase of construction.

This latest development comes less than a week after a virtual Council Committee hearing on a bill that would move redevelopment forward. Community members at the hearing voiced their concerns that the current plan doesn’t reflect the residents’ interests.

“I strongly advise you, do not…do not vote for this and mark this up,” High testified.  “Because there’s no solid plan in place, no guarantee for residents. There aren’t enough units being built, as promised. Residents are being displaced.”

The hearing on the alley and street closures signify a concrete step toward a redevelopment plan that a number of people in the community disagree with.

Marie Muschette, who has been a resident of Park Morton for nearly 50 years, said she doesn’t like what’s happening with the redevelopment, or how quickly DCHA is moving people off the property.

“It’s nice around here. Nothing wrong with the property,” Muschette said. “They [DCHA] just need to fix it up. They need to do their job.”

Park Morton has been slated for redevelopment since 2008 as part of the city’s New Communities Initiative, a government program intended to revitalize the most run-down subsidized housing in the District. Park Morton is one of four sites NCI is focusing on.

The project is supposed to entail one for one replacement of existing public housing units and the opportunity for residents to return to the redeveloped property. However, some community members and residents see the project as an effort to gentrify the neighborhood further and push primarily Black residents out; they don’t believe the NCI promises will be kept, according to High and other community members.

“How often do we see these new developments keep on with the same pattern: force people out of their homes, demolish public housing complexes, and fail to redevelop on-site or replace units at one to one,” said Mark Friend, a member of Showing up for Racial Justice DC.

Park Morton is a 174-unit complex spread across 12 buildings; each unit is a two-bedroom apartment. The redevelopment plan for the site has 189 new units, split between multi-bedroom apartments, flats and townhouses. However, only 57 of those units will be reserved for public housing residents. The other units will be split between moderate-to-affordable housing and market-rate units, ensuring another principle of NCI: mixed-income housing.

“It says everyone has the right to return,” Empower DC organizer, Daniel del Pielago said in reference to the promises of NCI. “So how will they return if there’s only 57 units built on the site?”

The original redevelopment plan included two properties off-site to be built before construction on Park Morton began. The build first plan was intended to help ensure residents were not displaced from the neighborhood. Many residents said they were led to believe that they would have the option, once all redevelopment was completed, to either remain at the property they relocated to or return to Park Morton.

The Avenue, built across the street from Park Morton in 2012, provided 27 public housing replacement units. Bruce Monroe Park, just a few blocks away, was intended to be another build-first site, which would have created the necessary 90 additional units. However, a lawsuit brought by neighbors of the park and subsequent ruling from the DC Court of Appeals has delayed the development indefinitely.

In response to the build first site set-back, the developers, The Community Builders and Dantes Partners, and city council member for Ward 1, Brianne Nadeau, are pushing to redevelop the Park Morton site. They maintain that Bruce Monroe will still be built, but as a later phase of the project, once the zoning commission sorts out the legal tie-up.

“I want to be very clear,” Nadeau testified. “The court remanded the Bruce Monroe decision back to the zoning commission, but I have every intention of seeing that part of the project through to completion. There will be no downgrading of the number of replacement public housing units. And I will not rest until we have built every last one of them and all of our families have a chance to return.”

For residents who have waited years for these promised new units, that guarantee doesn’t mean much. And when redevelopment is contingent on empty buildings, residents feel the pressure to move, Pielago said.

Once residents have moved away from the property, the likelihood of them returning to new units once they’re developed, even with a right to return, drops significantly; and it continues to decrease the longer they’re away from the community. In best-case scenarios, only 30% of displaced residents return, according to William Jordan, a member of Georgie Avenue Community Development Task Force.

Park Morton has already lost a substantial amount of its residents, with more expected to leave over the coming months. As of Aug. 24, a total of 107 families have opted to take housing vouchers. Forty-five of them have already been relocated. In the end, only six families have chosen to remain on the site, according to the housing authority.

“It’s not what we wanted it to be, but I can’t tell a family that they can’t take a voucher,” ANC1 Commissioner, Michael Wray said.

However, many of these residents don’t feel they really have a choice, Pielago said. They’re often making a decision driven by the fear that they’re about to lose their home.

During the hearing, Pielago read the testimony of a Park Morton resident who had taken a voucher. He said she wished to remain anonymous for fear of retaliation:

“I have no idea when I’ll come back or if I will come back,” Pielago read. “We are all being moved with no idea of what will happen. I will be moving soon now because I’m a voucher holder. I’m concerned about having to pay utilities at my new place, which will add an extra expense for me. I feel like our community is being destroyed.”