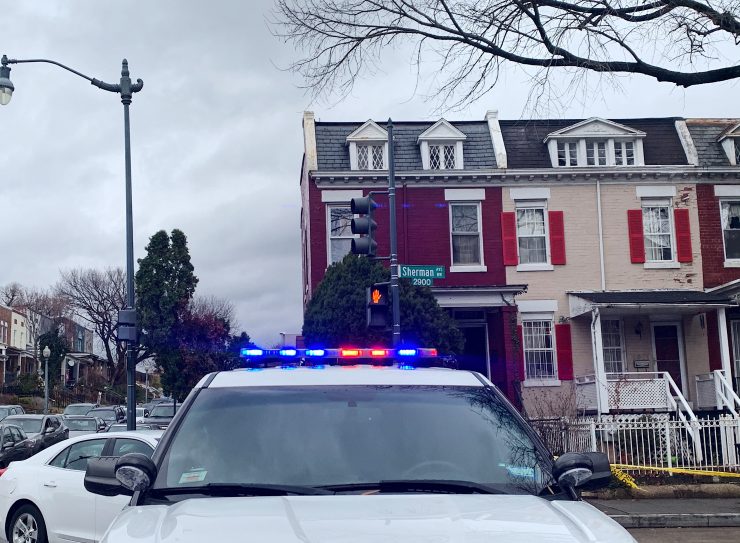 A man was arrested after a standoff with Metro police that lasted multiple hours in Columbia Heights yesterday.

Terry Smith, 35, of Southeast D.C., was arrested after showing up to the home of a victim who had taken out a civil protective order against him.

When the police were called by the victim, a warrant had already been issued for Smith, who had been evading charges of assault with intent to kill, robbery, and violation of a civil protection order.

According to the MPD police report, Smith’s warrant for arrest was secured following an earlier aggravated domestic assault he committed against his ex-wife and a man with her.

“Victims One and Two were walking in an alley in the rear of Victim Two’s home, when they were approached by Smith. Smith is Victim Two’s ex-husband. Smith assaulted Victim one, stabbing him five times,” according to the report.

Smith then dragged his ex-wife up the alley where the assault took place and stole her phone before fleeing the scene.

Smith’s ex-wife also had a Temporary Protective Order against him that had been verified by the Police Department.

Yesterday, when Smith returned to his ex-wife’s home, MPD was called.

“A perimeter was established, and a barricade was declared. After a brief standoff, Smith surrendered to the officers,” according to MPD.

The standoff took place at a residence off of Harvard St. NW and Sherman Ave. NW, and resulted in the closing of multiple streets.

Residents of the Park View and Columbia Heights neighborhood took to Twitter to express their concern.

Aaron Albright, a resident of the Columbia Heights area tweeted saying, “Don’t like the helicopter and emergency vehicle sirens going off right now…”

Sherman and Fairmont through Harvard look like they are current blocked by policy activity. Good luck everyone and be kind to one another.

Albright said he was alarmed by the number of police cars filing onto the streets of Sherman Ave., and decided to check Twitter when he thought he heard a helicopter.

Alan Henney, a citizen journalist covering the area, also took to Twitter to share what he knew.

Police have CLOSED several streets in the Columbia Heights, Pleasant Plains and Park View neighborhoods while they attempt to talk a wanted man out of a residence near Girard Street and Sherman Ave NW-DC. The SWAT team and fire/EMS are assisting.

“Police have CLOSED several streets in the Columbia Heights, Pleasant Plains and Park View neighborhoods while they attempt to talk a wanted man out of a residence near Girard Street and Sherman Ave NW-DC. The SWAT team and fire/EMS are assisting,” Henney said in a tweet.

Among the hoards of police cars were multiple Emergency Response Team vehicles blocking the front and back entrance of the Harvard Street residence where Smith was hiding.

The standoff lasted around two hours until Smith was taken into custody safely. No shots were fired by police during the standoff.

The blocked-off streets were opened back up around 4 p.m.

According to Karimah Bilal, the Program Manager of Communications for the MPD, no additional information regarding the incident had been released at this time.