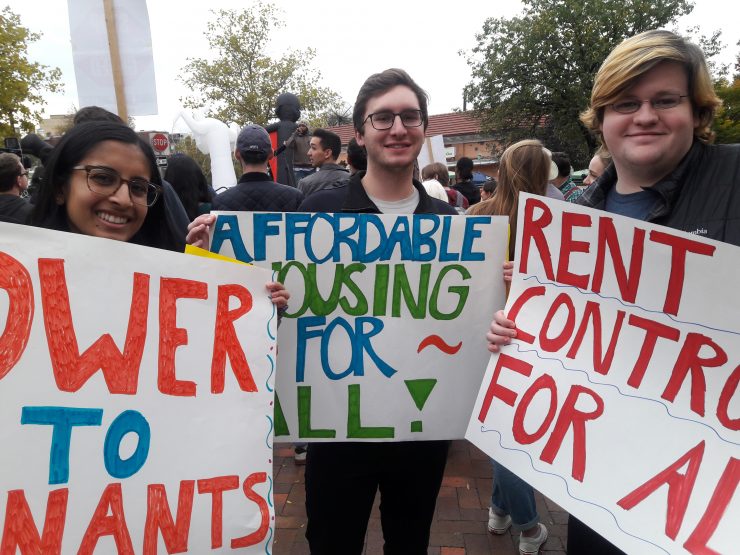 66-year-old Shirley Tabb and her dog lived together for 10 years in a corner apartment until she was able to “move on up” to the sixth floor with a big bay window. The apartment did not have rent control and because of that her landlord was easily able to raise the rent an additional $800.

“For a while now they’ve been raising the rent, about every six months, and I’ve always paid it, but I could see that I wasn’t getting anything out of the raised rent,” Tabb said.

When she moved into the Carmel Plaza in 1992 the rent was $400, but when she left this summer the conditions were worse, and the rent was high.

At a rally Saturday tenants like Tabb shared stories of fighting to gain rent control, having history with the homes that are experiencing increases and stories of illnesses due to the stress of rent.

Short video of the rally

Reclaim Rent Control is a campaign with more than 20 organizations comprised of tenants, housing advocates, legal service providers and labor unions that support residents vulnerable in their homes.

Tenants chanted phrases and waved “power to tenants” signs as they came together at Lamont Plaza in Columbia Heights.

The campaign is spreading awareness because they expect the Rental House Act of 1985 to expire Dec. 31, 2020. The DC Council must vote to reauthorize the laws before that deadline.

The act provides rent control regulations across the district and covers all residential rental properties.

The law prohibits landlords from raising the rent if it has been raised in the past year, violating the terms of the lease agreement and making multiple rent increases in a set time. The landlord is also required to provide a 30-day notice if there is an increase in the rent amount.

Landlords are also required to follow the Consumer Price Index, which is 4.3% plus an additional 2%, according to the Office of the Tenant Advocate. However, senior and disabled tenants have a smaller increase rate of 2.3%.

Jennifer Berger, managing attorney at the Legal Counsel for the Elderly, has been helping tenants for 15 years who have been subject to vacancies, agreements and petitions filed by landlords.

A tenant union was created to prevent rent increases on buildings made into condominiums at top dollar, said Berger. Columbia Heights is one of the areas Berger fought for due to its growing gentrification.

“Housing providers know that rent can only increase by the consumer price index plus 2% for most tenants, unless the landlord files a petition under rent control to increase the rent beyond the regular amount,” Berger said. “Housing providers threaten to file these petitions for larger rent increases.”

Hardship petitions allow landlords to claim that they do not have a 12% rate of return on their investment. Substantial rehabilitation petitions let landlords claim they have major renovations that are 50% or more of the tax assessed value of the property, which can increase rent up to 125%.

“Petitions get filed with the Department of Housing and Community Development in the rental accommodations division, but tenants can then file a notice and objections which would be heard at the Office of Administrative Hearing,” Berger said when explaining the process a tenant can do to appeal the rent increases.

Berger specifically works with seniors who are subject to large rent increases and has defeated many petitions against them. Advocacy among the community and Americans Association of Retired Persons has protected seniors to be exempt from petitions if their income 60% or less of the area median income, normally at $60,000.

The law may have been set to protect tenants, but those tenants feel that more needs to be done to stabilize community housing.

Landlords push older tenants out, flip those units and then bring newer tenants in. Those tenants tend to be younger, whiter and able to pay $2,000 to 3,000 a month for rent, said Bastek.

She added studies show that 20,000 black residents have been pushed out of DC over the past 10 years.

Bastek and other members believe that petitions and other allowances are loopholes that should be over sought by the DHCD.

“Voluntary agreements are a loophole in the rent control law that we want to eliminate because it encourages landlords to cut ties with current tenants that makes it seem like they are benefiting from the law,” Bastek said.

The campaign has been trying to get rid of loopholes within petitions and agreements because the oversight is little and tenants get abused, said Bastek.

Shock could be heard in Bastek’s voice as she explained that voluntary agreements allow for rent to increase by as much 374%.

Bastek also said that landlords benefit for vacancy increases and can earn up to 30% if a tenant moves out.

“Once they’re out the landlord can make superficial fixes, raise the rent and get new tenants in,” Bastek said.

As for Tabb, she is lucky to have found a new home in a wonderful neighborhood that is rent controlled.