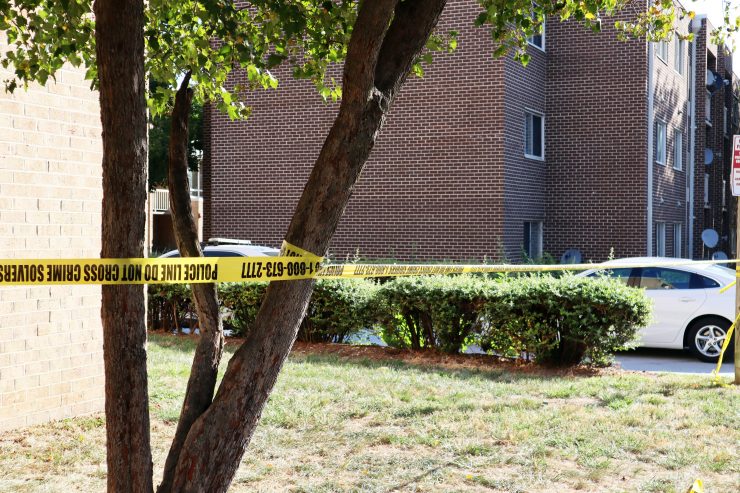 MPD reports that violent crime is down, but in Columbia Heights, residents and business owners are still feeling the impact.

Three weeks ago, one person was killed and five more were injured in a shooting below LaShonta Judd’s window in her apartment at the corner of 14th Street and Columbia Heights.  Today, the police tape is gone, the journalists have mostly disappeared and kids are back playing outside of Trinity Towers Apartments. But when Judd walks out the door each day to walk her dog, Django, she still has to walk past the vigil.

“I want them to clean up the bottles and teddy bears and stuff,” Judd said. “When I walk out, it’s too much. Stressful.”

Judd met with The Wash outside of Trinity Towers while she was walking Django. She asked if we could walk around the neighborhood as we talked, or if it would be too scary. She warned that seven months ago, her truck was shot multiple times. Then, last month, her new car was vandalized.

In the 15 years that Judd has lived in Columbia Heights, crime has always been an issue. This shooting felt different, though—it was literally close to home, and her sons, recent high school graduates, grew up with the victim.

The Trinity Towers shooting was just one of the shootings in a recent uptick in violent crime. Mayor Muriel Bowser has committed to reducing crime in the District through a variety of initiatives, the latest of which is the Fall Crime Prevention Initiative. The FCPI will deploy Metropolitan Police Department’s available resources to target areas (including Columbia Heights) to prevent crimes and enforce the law.

Mayor Bowser has previously invested in this public health-based approach to violence in the District. The FCPI is part of Safer, Stronger DC, which provides resources to programs for public transit, safety, employment, wellness and housing to help residents feel safe and supported in their communities.

Statistically, these programs seem to be working. MPD reports that in District 3, overall, violent crime rates are down. There has been an increase in homicides in the past two years, but the total number is down by 130.

Despite the decrease, in MPD precincts 302, 304, 305 and 307, violent crimes with or without a weapon from the past two years still lights up a map.

Sergio Velarde, store manager at Flip It LJ Diner, said that the crime used to be worse in Columbia Heights.

“Because I’m inside all the time, I don’t see it, but I read it in the newspaper,” he said.

Velarde himself, though, hasn’t seen anything firsthand—except what he suspects are drug deals in front of his shop.

“[Crime] has decreased, but it’s still a dangerous neighborhood after 9 or 10 p.m. It’s bad, especially that corner by the Giant. Or by the 7-11, 14th and Columbia Road.”

Q n Q Cleaners is at the end of a strip center across from the Giant on Park Road. Store Manager June Park has lived in Columbia Heights for 15 years.

Earlier this year, a robbery took place on Park’s block. This incident was one of many. He expressed his concern about fights, public intoxication and littering near his business.

Park would like to see a greater police presence in the area to prevent people from drinking and subsequently fighting near the corner of Park Road and 14th Street.

“If [the police] see people drinking outside, they’re going to have to stop them,” he said.

So far, his calls to MPD haven’t helped.

Park has reached out to Mayor Bowser’s office on multiple occasions to request assistance and more resources for homeless individuals in the area. Her office gave Park a number to call if he witnessed any fights near his business, but it hasn’t been as successful as he hoped.

“You cannot call every day,” he said.

“There’s nothing they can do,” Judd said when asked what would make her feel safer. “They’re shooting every day.”

She stressed the toll living in Columbia Heights has had on her. The shootings, vandalism and stress of it all has greatly impacted her mental health, and when she goes out to walk Django, she always sees the vigil and again has to remember the boy who died below her window.

Later this month, Judd will be moving away from her corner of 14th and Columbia. Soon, she won’t have to see the vigil again.

“There’s nothing else to say. I can’t do nothing about it. I’m just living,” she said.