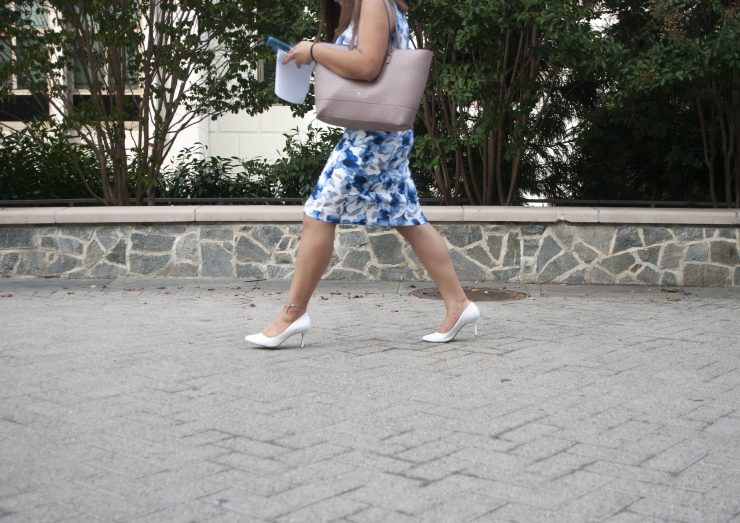 While government officials investigate possible Trump impeachment, college students remain skeptical about what could come from the inquiry.

A whistleblower complaint states Trump asked the Ukrainian leader to investigate 2020 Democratic candidate Joe Biden and his son, Hunter. That claim is partially backed up by a rough transcript of the phone call.

The fate of the upcoming 2020 election and the current President sparked conversation among D.C. campus voices.

Katherine Boyko, 18, a communications, legal institutions, economics and government major at American University, moved from Ukraine four-and-a-half-years ago and feels a personal connection to the international conversation.

Boyko said there are two sides to every story when talking about the impeachment process.

“I’m trying to look at it from the perspective that there’s going to be a clash between the Republicans and Democrats because of the impeachment trial, and I don’t want it to impose any hardships upon policies that Democrats are trying to create simply because this process is starting,” Boyko said.

Ukrainian-born Boyko believes international news coverage should have focused on Ukraine’s election rather than the phone call. During the time of Trump’s phone call with Zelensky, the Ukrainian leader had just been elected as president.

Thomas Kenna, an international studies major and senior at AU, said he follows the inquiry news coverage closely, but can’t take a stance without more evidence.

Kenna said it would have been better if Pelosi waited for the transcripts of the phone call to be released, as Republicans suggested. The five-page rough transcript of Trump’s conversation with Zelensky came a day after Pelosi’s announcement.

“I totally agree that these are valid allegations to look into if the press reports were true and corroborated,” Kenna said.

Kenna added Pelosi’s decision to launch the inquiry before seeing the transcript from Trump’s call with Zelensky makes the efforts seem non-partisan.

“There is mainstream media, partisan media and conservative media with different spins of the impeachment,” Kenna said about media coverage. “I don’t think this is the hill we want to die on.”

Other students say they are confident President Trump’s actions warrant an impeachment inquiry. They aren’t confident the inquiry will be more than a political statement by members of the House of Representatives.

George Washington graduate student, Matilda Epstein, says she is “symbolically on board” with the impeachment inquiry, but she wants to wait and see.

“Presidents have been impeached for less, yet this President has stayed in office, so I’m not fully optimistic change will actually come when he wasn’t impeached for other offenses he’s made,” Epstein said.

A few students echoed that lack of optimism, like Tiffany Wilson, a student of the University of the District of Columbia.

“I think it does no use to impeach Trump if the rest of the cabinet isn’t going too,” Wilson said. “I’m worried all of the attention this is bringing will make people forget about other important issues like the wall at the [U.S.-Mexico] border.”

Brooke Patterson is a George Washington University student studying public health policy and said she’s heard discussions on campus that make her proceed with caution. She said impeachment has been used in the past as a threat.

“People seem excited, but I am hesitantly optimistic,” Patterson said. “Like people talked about impeaching Obama but that never happened.”

Despite skepticism, some students say they are hopeful this inquiry will result in President Trump’s removal and greater change for America going forward.

Kyilah Terry, a graduate student at Georgetown University, said her “best-case scenario” is the president being impeached and found guilty by the Senate, something she said has been “a long time coming.”

Mia Graves, another UDC student, said she feels optimistic that justice will be served.

“I’m pro-impeachment personally. Time has been up,” said Graves.

“D.C. is a place where politics is everywhere and in conversations with whoever you talk to, so I’m sure we will hear more,” Terry said.