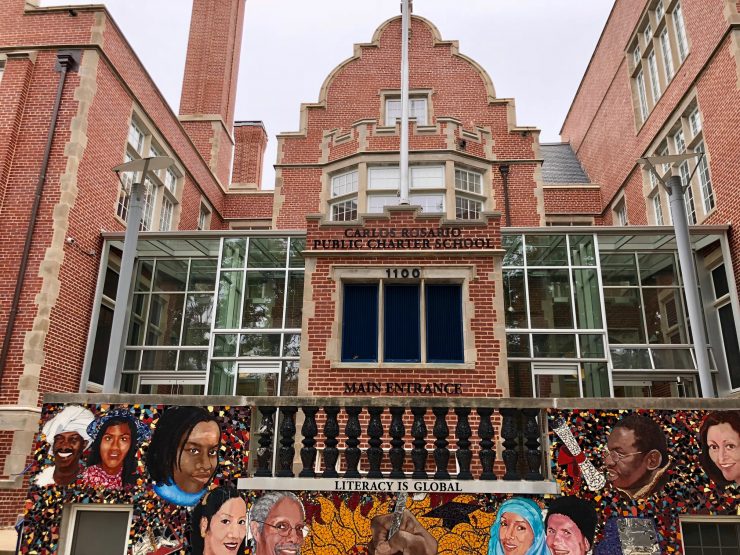 For DC immigrants struggling with family separation, therapy is crucial

Counseling at a charter school in Columbia Heights helps students whose families have been separated by migration.

Students at an international charter school in Columbia Heights rely on multilingual mental health services to cope with the trauma of family separation, one of the school’s counselors said.

By offering its students therapy in four languages, Carlos Rosario seeks to help them establish new lives while they are likely far from their established support systems. Andrea Drost, a counselor at Carlos Rosario, said the school caters to immigrants from around the world.

“Our student body represents over 80 countries in the world, and they speak over 40 languages combined,” Drost said.

Mengiste Ferede, a counselor and psychotherapist at Carlos Rosario, said he sees and hears about family problems more now than he ever has in his 17 years with the school. Family separation is a bigger issue now because not all members of a family are able to come to the U.S. together, Ferede said.

Abel Nuñez, executive director at the Central American Resource Center (CARECEN), said often a parent leaves first to settle in and then sends money back to children in their home countries. This separation can cause lasting trauma for families long after they are reunited, Nuñez said.

“At the end of the day, the parent is who’s there day-to-day, not who sends the money,” Nuñez said.

Nuñez said children who reunite with their parents in the U.S. many years later find themselves estranged because they were so young when their parent left.

“Sometimes that reintegration, if it doesn’t have support, it fails. Children run away from home, they clash with their parents, they can’t get along,” Nuñez said.

Ferede said people also come to him with post-traumatic stress disorder, difficulties adjusting to the U.S., depression and suicidal thoughts.

“We really have to take it seriously and give necessary treatment,” Ferede said. “Trauma is a very serious thing in mental health.”

Originally from Ethiopia, Ferede said counseling is almost nonexistent in many African countries, where many people prefer to talk with their pastor or priest. Ferede, who advocates for psychotherapy or talk therapy, said his students are more comfortable talking to him as a professional counselor.

“This is a sign of adapting to the culture here in the United States,” Ferede said.

“Money, politics and mental health – we just don’t discuss,” he said. “But the consequences of that can be dire.”

Drost said Carlos Rosario counselors are aware of the stigma and work around it by introducing themselves in classes and addressing common concerns within the immigrant community, like family separation and culture shock.

“I think the school does a really good job of normalizing the need to talk to someone by really incorporating counseling into a daily routine,” Drost said.

Ferede said the school is unique because the student ages range from 18 to 75 years old. He said older immigrants face more challenges when coming to the U.S. because they are more likely to resist mainstream American culture.

Ferede said he tries to make sure the 10 to 15 students he works with weekly feel comfortable with him. He said building relationships with his clients and watching them make progress is rewarding.

“That makes me so happy when I see individuals improve their personality and the way that they communicate with their peers and friends,” Ferede said.

According to the school’s Communications Specialist Erica Sanchez, Carlos Rosario became the first charter school for adults in the U.S. when it opened in the 1990s.

“A lot of people are not able to read in the Roman alphabet, or they never got schooling in their home countries,” Sanchez said.

In addition to mental health services and English as a second language classes, Carlos Rosario offers GED programs in Spanish and English, computer literacy classes and career training in education, health, technology and other subjects.