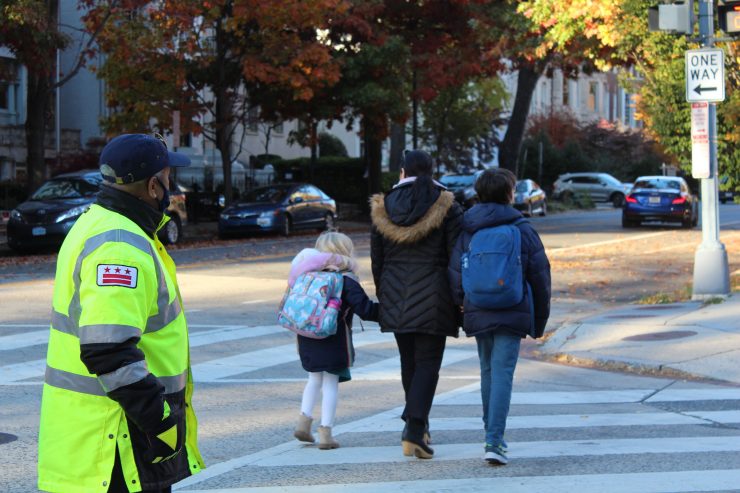 After several traffic accidents across the city involving children, Dupont Circle residents are calling for drastic changes to improve street safety in their community.

Four-year-old Nathan Means was riding his bicycle home from the park with his mom like he does weekly.

The car struck the front of Nathan’s bike, throwing him to the ground, his head hitting the side of the car as he went down.

He walked away with only scratches and bruises. But other children haven’t been as lucky.
Nathan was one of four children hit in crosswalks in less than four weeks in the District.

In September, a car struck and killed 5-year-old Allison Hart in a crosswalk as she was riding her bike through Brookland, triggering more calls for action.

Hey @MayorBowser @DDOTDCDirector @DDOTDC @CM_McDuffie, today I commissioned an urn for my 5-yr-old killed in a crosswalk. What did YOU do today to make our streets safer for vulnerable users? How about demanding reciprocity w/MD, VA? #Brookland 1/2

In her testimony before the Transportation and Environment Public Roundtable, Allison’s mother, Jessica Hart, expressed her fury at the current situation.

“It is past time to do something about traffic violence in D.C., and everyone here today should be furious about the number of preventable deaths in our city,” Hart said at the roundtable.

Nathan’s father, John Means, said he feels the pain of these other families, and is one of many people calling for immediate changes.

“It is that kind of traumatic moment that puts so much in perspective,” Means said.

Traffic deaths continue to spike in the District, with 2021 being the deadliest year in over a decade, a statistic that doesn’t account for close calls or unreported accidents.

According to a recent District Department of Transportation “Safe Routes to School” report, the streets around Ross Elementary School, where Nathan attends school, have had accidents including pedestrians and cyclists at every intersection in the area between 2015 and 2019.

Though the fight for safe streets is recently ramping up, calls to change streets have been long-existing throughout the District.

There has been criticism of Mayor Muriel E. Bowser’s Vision Zero plan, which holds the goal of ending all traffic deaths in the city by 2024.

Vision Zero was launched six years ago, but traffic deaths have increased since 2012, despite the plan.

Means called the intersection where his son was hit “dangerous,” with unclear signage and no plan in place to slow down cars.

Means is one of several community members actively calling for changes to streets in order to ensure they are safe for pedestrians of all ages.

In the short term, Means said he hopes to see repainted crosswalks, curb extensions and other plans to slow fast-moving traffic through residential neighborhoods like the one Nathan was hit.

Advisory Neighborhood Commissioner Matthew Holden has also been vocal about the issue of street safety since he became a commissioner.

He said the current crop of ANC commissioners has made this a key issue, seeing as pedestrian and cyclist safety are at peril in the area.

Holden said he thinks that a mixed-use area like Dupont Circle with both residential streets and commercial strips creates clogged traffic and issues for both pedestrians and drivers, but he is dedicated to finding a way for them to coexist.

Holden said his ultimate goal is to eliminate all traffic accidents, but it is particularly important to ensure that children aren’t being hit.

He said the recent tragedies involving children have shaken up the community as a whole.

Holden said the commission has been working to identify which streets have been overbuilt and is working to find ways to make them more pedestrian-friendly.

“We need to think about how we can turn back streets over to our pedestrians,” Holden said.

Some of the proposals that Holden suggested were raised crosswalks or cobblestone streets to slow drivers.

DDOT Transportation Planner Regina Arlotto said street safety has become a top priority for the department in the wake of the recent spike in accidents involving children.

Arlotto said the team is currently reviewing the intersections that have been prone to accidents.

In the short term, they are adding high stability crosswalks with more reflective paint and curb extensions that force cars to be a distance away from pedestrians and cyclists.

She said DDOT has received some backlash from some members of the community, but at the end of the day, they are working to make the streets safe and accessible for everyone.

“It is hard for car drivers to understand that the mission of DDOT is not just to plan for vehicle traffic. Our mission is to create safe, public travel spaces,” Arlotto said.

While Means is happy to see some of these changes go into place, he also thinks that Vision Zero is not as fast or as drastic a plan that needs to take place in the District.

“This requires a pretty drastic and city-wide emphasis.”