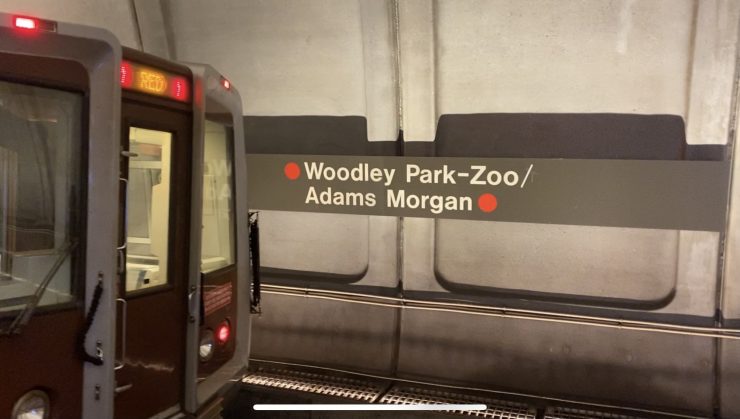 Wind races along the recessed walls of the metro station. Platform lights flicker, joined by an intensifying screech.

A harbinger from the 80s returns to the District in a time of transportation troubles. 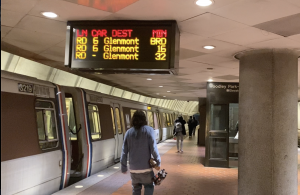 With 60% of the District’s 7000 series trains pulled from service and facing inspection, their older 1980s counterparts now see increased use. Set to retire by 2024, the commuter crisis presents one last great ride for the 3000 series fleet, with more returning to service each day.

“We are working as hard as we can to get that legacy fleet back out there, but it takes time, as I’m sure you can imagine.” WMATA General Manager Paul Wiederfield said at a Metro Board Activities meeting last Thursday.

Early in the pandemic, the 6000 and 7000 series made up most metro service, with the 3000 series sitting in cold storage. However, when a red line train pulled apart for the second time last year, the 6000 series was recalled and replaced with some of the 3000s, said Chief Operating Officer Joseph Leader.

The majority of 3000 trains remain in storage, he said. They were first introduced in 1987 and were manufactured by Italian rail car company Breda.

A look inside the Adams Morgan Woodley Park-Zoo station reveals sparsely populated halls. A handful of passengers sit socially distanced across the platform. Blinking chyrons display a 16-minute wait until the next train arrives. After three minutes, the chyron said it would arrive in 15.

Eventually, the air begins to howl, prompting those waiting to look up from their phones. The 3000 series becomes immediately identifiable from its faded grey exterior, which at one time likely appeared as off-white. A dark crimson stripe runs the length of its shell with red, white, and blue vertical stripes across its front.

The crowded train emerges, dumping scores of passengers out into the station. Those standing at the far end of the platform chase after the caboose pulling past, as the retro-metro currently runs with six cars instead of the usual eight.

Michael Hart, owner of Hart’s Desire in Adams Morgan, said his employees generally commute from two separate directions; some take the train north from Virginia while others head south from Tenleytown.

He said his business adjusted quickly this time around after having gone through reduced service during the pandemic. He and his employees worked to increase their communications rather than rely on transportation alone. Some employees come in 15 minutes early or wait to leave until the next shift arrives. Overall, Hart said his staff was comfortable adapting to the delays.

“No one’s stressed out. We’re just rolling with the flow. So it definitely was a faster transition versus last year,” Hart said.

Hart said he’s disappointed in the city’s metro system, and that he’d expect the nation’s capital to have the best of the best.

The war-weathered 3000 trains offer function in place of beauty.

“Being a Washingtonian, I’m a little embarrassed to have people come to my city and not get good quality Metro trains,” he said.

The main concern for his employees, he says, remains on getting to work safely.

“The general response is the twos were not as reliable historically as the sevens and the sixes,” Wiederfield said. “That’s why we started to move them out of the fleet as we had those vehicles available.”

In any case, returning the older trains to service offers its own set of challenges.

“We’ve got to maintain them, we’ve got to keep a very close eye on them, on maintenance, so that’s the issue,” he said.

The 3000 series were built to be compatible with the 2000 trains, so a two may connect with a three, but never with a six. Both underwent rehabilitation starting in 2004 to replace their propulsion systems among a number of improvements to overall reliability.

“It’s not the best product we have, but it is what we have. Weiderfield said. “It’s what we have in the closet right now, so we gotta pull it out and use it.”

WMATA announced basic service on October 19th, calling for 31 six-car trains, the minimum required to operate its current schedule with no gap trains or spares, Leader said at the meeting. This milestone was reached on October 20th, with the second phase focused on targeted improvements. On the red line, additional trains plan to be added to maintain peak service with gap trains helping improve reliability. This second phase calls for 44 trains and is expected to reduce the wait to 12-15 minutes, Leader said. Once sufficient trains return to service, they will begin to increase from six to eight cars to help with overcrowding.

On Monday, WMATA announced in a press conference that 40 trains currently operate, having added eight since Friday. 24 of the operating trains are 3000 series.

The most crowding on the redline appears around 5 pm, especially between Metro Center and Judiciary Station, Leader said. He said that congestion had not reached more than 100 passengers per car, considered overcrowded during the pandemic. The busiest trains had over 90 passengers per car and crowding is monitored each day, he said.

The Woodley Park Adams Morgan-Zoo station appears relatively uncrowded by these pandemic standards. Within the retro-metro, passengers sit across faded blue cushions while others lean up against the doors beneath the warm fluorescent lights. It’s not uncommon for at least one seat to remain available even during the 5 pm peak hour here. The biggest challenges to transportation in the neighborhood lay just outside the station.

“I drive a lot. and I can tell you, you can literally see when Metro has issues. The roads get cluttered,” Hart said while stuck in traffic along 16th street. “And it takes me longer to get from store to store to be able to run my business because a lot of people don’t want to trust public transportation anymore. They’re losing trust.”

The 3000 series chugs along nonetheless, hoping to help before they’re turned into scrap. On several occasions now, it’s shown up its modern peers; first the sixes and later the sevens. Once again, those set to replace them fail, tasking the retro-metro with riding the rails once more.