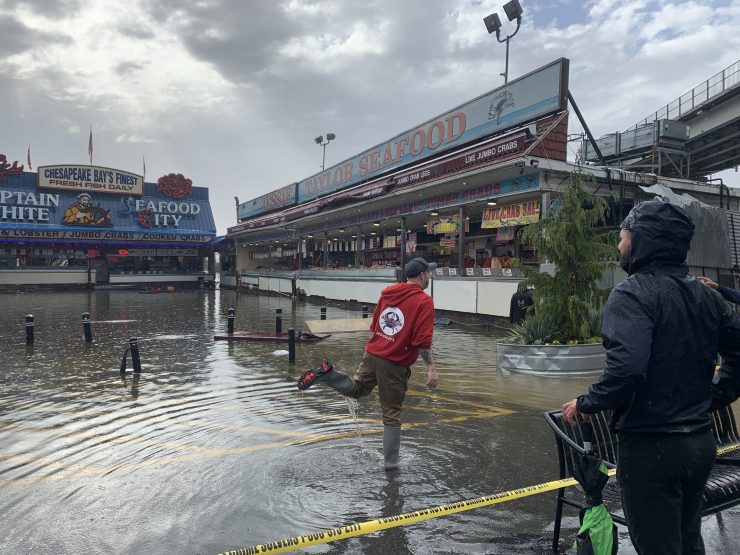 “Next customer!” yelled a Municipal Fish Market employee while pouring water out of his boot.

The Municipal Fish Market, located at the end of District Wharf, is underwater–and still conducting business.

Historic flooding hit Washington, D.C. in the early hours of October 29th and is expected to persist through Sunday morning.

According to the National Weather Service, The DMV region could be hit with the worst flooding the area has seen in 10 to 20 years, possibly since Hurricane Isabel in 2003.

One of the biggest tidal flood events of the past 10-20 years (possibly since Hurricane Isabel at some locales), is expected Friday & Saturday. Those along tidal shores should get ready for exceptional tidal inundation! Tidal forecasts here: https://t.co/Q2WdpDGgIJ pic.twitter.com/LQkL80pzQs

District Wharf is situated right on the banks of the Potomac, and is vulnerable to severe flooding.

Diane Groomes, who runs security at The Wharf, said the fish market is especially vulnerable because of its location. The fish market, which dates back to 1805, is the oldest continuously-operating open-air fish market in the United States, and still conducts business off of old barges at the end of The Wharf.

Groomes said while many of the other businesses are built above the floodplain,  the fish market sits in the danger zone.

“Once you get past these buildings we built above the floodplain from the 100-year-old flood, that was the worst ever on record,” she said. “But right now, the fish market historically, even on high tide, takes on water. But as you see, it’s about three feet deep right now.”

Nonetheless, fish market employees made runs back and forth into the murky water. Most of the employees were just wearing t-shirts and jeans, occasionally stopping to shake out water from their shoes or dry off the credit card machine.

Employee Antonio Senabria said this has been going on all day.

“We’ve just been walking through…we keep all the customers behind the line and as we come up and cash the order…we walk through the water so that way they don’t have to get wet pretty much,” he said.

Sergio Munoz drove from Alexandria to pick up his fresh fish, and waited patiently in his rain jacket for his bag of shrimp to be handed across yellow caution tape.

“It’s more than accommodating, I guess. The guys are walking up and getting our orders,” he said.

Wharf resident Michael Douglas also came down to get his fresh catch of the day. He said the only real inconvenience was that he couldn’t go up to the counter himself to decide what he wanted to buy.

“If the rain doesn’t stop, it’s [the flooding] going to get a whole lot worse,” he said.

At the same time, other fish market workers used a shovel and a small boat to paddle through the water to get to the far barge.

Senabria said it’s a minor roadblock in what otherwise has been a reasonably busy day down at the market.

“Seems like everybody still wants their seafood, so that’s what we’re here for,” he said.

Munoz was among several customers who expressed awe and appreciation for the employees’ persistence.

“I mean, it’s crazy, but you know, I mean, they got to get their business going. So you gotta do what you got to do,” he said.

Neighboring businesses like Rappahannock Oyster Bar closed down because of the flooding. Water levels crept up right up to the first step of the restaurant.

Right next to them, Groomes said Thrashers Distillery had to put up bars to keep the floodwaters from getting in.

Overall, Groomes said it’s a historic day. The last time the fish market flooded was back in 2018.

“A lot of people are coming to record the history. You know, if you live down here, it’s kind of cool,” she said.