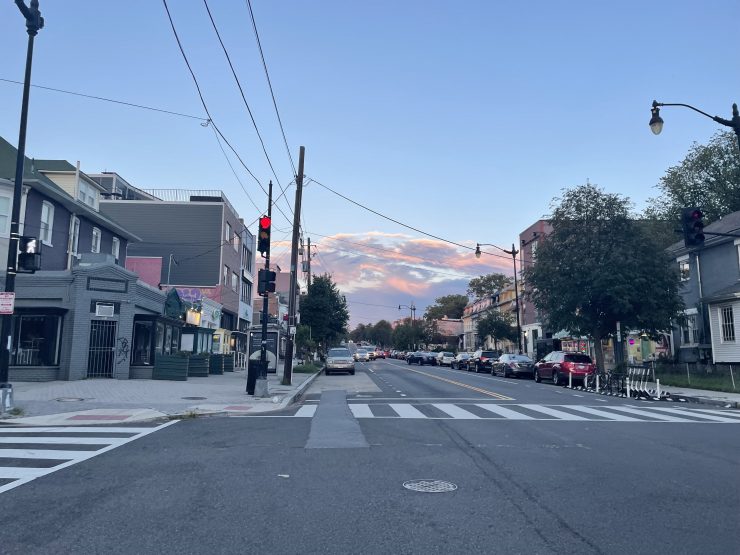 Neighborhood frustration with lack of traffic safety in Petworth has intensified again after footage from a collision last week, showing a car striking another car at an intersection, flipping it into a nearby lawn, went viral on Twitter.

Zachary Israel, a 4D advisory neighborhood commissioner representing part of the neighborhood, captured the video of the crash from a doorbell camera. The collision happened on Oct. 6 at the corner of Farragut Street and Illinois Avenue NW.

The problem with the intersection, Israel said, is that it’s not a four-way stop, and people often speed through it. Drivers traveling on Illinois Avenue don’t have to stop while those crossing on Farragut Street do. Additionally, parked cars on Illinois Avenue can create blind spots for crossing traffic.

“I got flooded with emails and phone calls and text messages after this happened,” Israel said. “I immediately went to the scene, and, you know, people are just fed up.”

Israel said he saw the woman in the flipped vehicle being rushed to the hospital after the collision.

This intersection has been “extremely dangerous for years, and years and years,” Israel said.

According to D.C. Open Data crash reports, there have been six accidents in the last six years at this intersection. However, there are reports from the D.C Policy Center stating MPD’s data on crash reports is flawed and missing information.

Israel said he’s been trying to get community leaders such as Councilmember Janeese Lewis-George and DDOT representatives to visit the intersection for months. After this accident, Lewis-George and Everott Lott, interim director of DDOT, came to the scene of the accident to evaluate what safety improvements could be made.

“I actually had planned this weeks ago before the accident happened because there’s been so many accidents there,” Israel said on Oct. 7. “We were supposed to meet on Nov. 3, and we actually bumped it up to today.”

In order to add safety measures such as a stop sign or speed bump, a request for a study must be submitted to DDOT and they have to complete the study to determine if safety measures need to be implemented. Israel said the community has expressed frustration to him and across social media that implementing safety measures on the streets takes too long because DDOT isn’t as involved as constituents would like.

I’ve seen sooo many crashes at that intersection. It should be a 4 way stop.

Israel said community members and advocates propose ideas such as more stop signs, stop lights, speed cameras and speed bumps to prevent collisions, but there’s been no luck getting these features implemented. He said residents all around Petworth face challenges in carrying out traffic safety improvements.

There have been four children hit by cars across the District in the last four weeks, according to The Washington Post. Faith Hall, co-chair of the District chapter of D.C Families for Better Streets, said this statistic is “atrocious,” especially because people have become desensitized to car accidents, she said.

Open data from the city’s Vision Zero initiative shows there have been three fatalities, 21 major injuries and 350 minor injuries caused by car accidents in Ward 4 so far in 2021.

Tom Bridge, a 43-year-old product manager, has lived in the neighborhood for 12 years. He said he’s seen traffic safety concerns worsen over the past few years and he’s fed up with the way DDOT handles traffic concerns.

Bridge said he and other community members have asked the DDOT to put in stop signs at certain intersections that have frequent accidents. He said the process is often drawn out and doesn’t result in any changes.

“The city will say things like, ‘Oh we’ll study that,’ but the study takes a year,” Bridge said about asking DDOT for stop signs. “Then they’ll come back and say ‘No, we don’t think we need anything here.’ So they just wasted all of our time.”

It feels like every neighborhood in DC has this same story. DDOT doesn’t believe reports of serious problems, trusts incomplete & inaccurate data, does nothing.

Why should we confirm Dir Lott, @CM_McDuffie @tweetelissa @chenderson if we’re just going to get more of the same? https://t.co/tQ0eYDwt3a

Additionally, Bridge said he and his wife have a son who crosses a number of streets to get to school, increasing his concern for traffic safety in the area.

“There’s no way I trust the streets of D.C. right now. It’s because DDOT doesn’t put the effort into making D.C. a safer place.” Bridge said.

DDOT did not respond to multiple inquiries for comment.

There are some amazing people at DDOT trying to do big things to transform the District into something safer for everyone. They get just as angry when people are hurt. My frustration is with the agency’s leadership blocking those staff members from doing what they know is right.

Though adding stop signs, traffic lights and other safety measures is one way to prevent collisions, Hall said implementing a holistic approach to traffic safety may be more effective. Instead of putting blame on the individual, she said whole systems need to be reevaluated.

“In our legal system people are very unlikely to lose a license for being a bad driver in court,” Hall said. “Frequently the justification for that is that you are denying an individual their economic livelihood, so we’re trying to change that, [having a car] shouldn’t be a prerequisite for living a full life and having access to quality of life.”

Bridge agreed the system surrounding traffic safety needs to change. He said people who look at it from the outside don’t understand the severity of the issue.