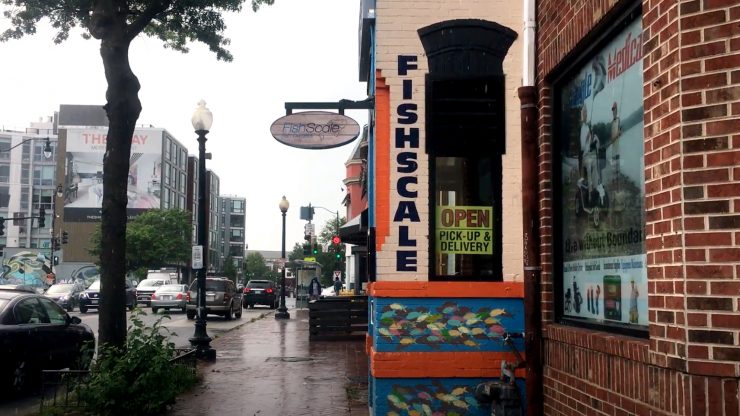 Kristal Williams was hopeful that the D.C. Black-Owned Restaurant Sweepstake would drive customers to her Florida Avenue restaurant for fishburger to-go. Unfortunately, a month after the promotion ended, FishScale is still in a rocky position.

“I did not see the kind of foot traffic or increase in sales that I had hoped to,” Williams said, who co-owns the restaurant.

FishScale is one of nine restaurants that participated in the promotion created by the Shaw restaurant HalfSmoke, food blogger Anela Malik and startup Raise the Nation LLC. Running from Aug. 3-16, it drew about 150 participants to the businesses and gifted four winners with prizes, such as gift cards to the restaurants and a Washington Wizards jersey.

Julie André, the sales and events manager at HalfSmoke, said there was a surge of patrons wanting to support Black-owned businesses following the Black Lives Matter protest, but that it had since died down. The sweepstakes was meant to be a way to revitalize the momentum to “eat Black.”

Williams said she is pleased with the increase in social media followers brought by the promotion, which she hopes will convert into customers. She describes FishScale, which she runs with her brother, as a smaller business that “people are still discovering” and wishes she had more time to devote to social media marketing to attract new customers.

“Participating in group activities is a good way to let people who dine out know we exist,” Williams said. “Unfortunately, we are short-staffed, and I have been working more in the business than on it, so I wasn’t able to devote as much time to promoting our business online.”

Williams stressed the value of collaboration and networking for black businesses, especially for ones like hers with smaller social media reaches. She said that while “competitiveness is sometimes an underlining barrier,” she is actively working toward networking with other restaurants for more events like the sweepstakes.

Like Williams, André said that HalfSmoke did receive a little extra business due to the sweepstakes but was surprised there wasn’t a bigger impact given the local news coverage of the promotion.

Additionally, both reported that the recently-held Black Restaurant Week was also unsuccessful in generating new business. This marks the first year of D.C.’s inclusion in Black Restaurant Week, a series of rolling promotions at Black-owned restaurants in different cities, from Sept. 18-27.

HalfSmoke is self-described as a well-known “giant pillar in the Shaw area.” And unlike FishScale, André reported that their restaurant is still getting regular customers and is usually booked on the weekends.

The biggest challenge for her and her team is how to continue hosting events while observing CDC guidelines. HalfSmoke regularly hosts events ranging from networking events to collaborations with charities.

“We have to look at this restaurant and have an open mind about what the venue can be,” André said. “Can it be a voter registration sign-up area? Can it be a place where people can adopt dogs?”

However, she now struggles to plan events around social distancing guidelines. Given the need for space, events now generally need to be held outside, leaving them at the mercy of the weather.

As summer ends, winter will bring new challenges to restaurants and bars which have largely capitalized on the warm weather to host outdoor seating. For businesses like HalfSmoke whose outdoor patios don’t have roofs, the race to winterize is on.

“We don’t have a backup space, so if it rains, we’re screwed,” André said. “So that’s really sad, I have been worried about that.”

While HalfSmoke customers are still filing in to eat, the need for social distancing has meant that the bar area is closed to customers. André said it has altered the casual vibe of the restaurant and is something patrons miss.

“People come in and they want to feel back to normal, and we can’t provide that at the moment,” André said. “You can’t just go up to the bar and grab a drink from the bartender like you used to.”

Both FishScale and HalfSmoke will participate in the DMV Black Restaurant Week (DMVbrw) in November, an initiative by local entrepreneurs that intends to inspire community growth within the local Black communities.

In its third year, DMVbrw is a year-round initiative that supports Black food and beverage businesses by connecting them with other businesses, training and resources.

“We’re not just a week where we come in and do promotion, we’re on the ground with our partners year-round,” said DMVbrw co-founder Erinn Tucker.

In addition to the week-long promotion Nov. 8-15, DMVbrw will virtually host its annual Business of Food + Beverage Education Conference. This year’s main themes are the power of collaboration and COVID-19 recovery.