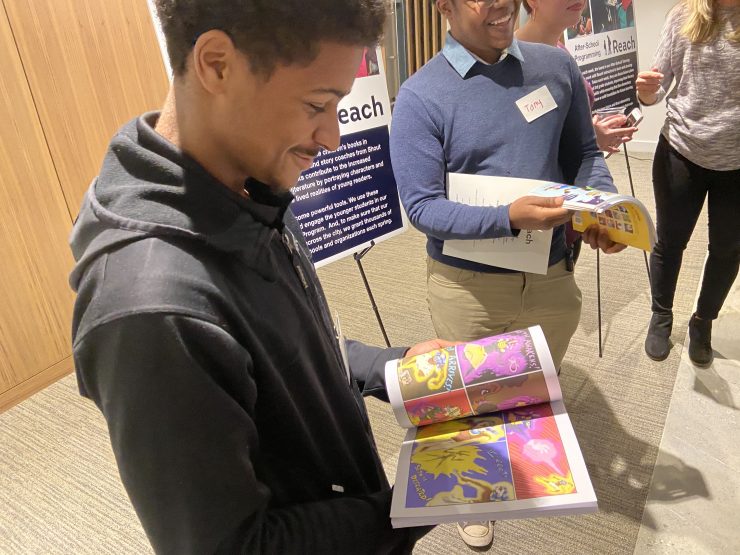 The books’ topics range from toxic masculinity to grief. The authors said they hope their books inspire younger children.

Riley Campbell wiped tears from her eyes as she posed for a picture with her peers. They smiled and held a wide poster printed with the cover of their book, “Man Up!”

“I grew up with my little brother and I saw a lot of kids my age saying boys can’t cry,” Riley, a junior at Ballou High School in Southeast Washington, said. “As I got older, I started to get involved in political and social issues and realized gender norms are stupid.”

Riley and about a dozen other teenagers launched their own children’s books Thursday in Northwest Washington. The high schoolers, many from Wards 7 and 8, are part of an after-school tutoring program called Reach. Each year some of the students get to publish books for the second- and third-graders they mentor.

“Kids like seeing authors like us. Kids need to see authors like us,” said DeAsia Scott, a Reach tutor and senior at Dunbar High School in Truxton Circle. She’s written two books through the program.

Now in its seventh year of producing young authors, Reach has given away 13,000 books written by D.C. teens, said Jusna N. Perrin, the organization’s deputy director for programs. The topics range from grief, to go-go music, to friendship.

“These books are valuable and their value is amplified when we put them in the hands of those they’re intended to inspire,” Perrin said.

The books not only provide racial diversity in children’s literature – the characters at the center of these titles are almost always black kids – but they also promote diversity in experiences, Perrin said.

Jocktavious Montford, 15, another student from Ballou, said he wanted to write a book that could help children deal with grief. He worked with three other students to write “Georgia in the Jungle.”

“We agreed on grief because we know it’s a thing a lot of young people go through, but don’t know how to deal with,” Jocktavious said.

The book’s main character, Georgia, loses interest in the things she enjoys when her best friend dies. At an overnight event at the zoo, Georgia is visited by five animals who take the forms of five stages of grief.

The message strikes true for kids in the District, many of whom have lost friends, cousins and siblings. Twenty children and teens under the age of 19 have been killed in the city since the beginning of the calendar year, according to the Washington Post’s homicide database.

At Ballou, where Jocktavious goes to school, three children died in a single school year between 2017 and 2018.

The book launch gave students an opportunity to introduce their books and share their own stories. The annual event serves as a fundraiser for Reach; dozens in attendance purchased books.

The event was also hosted by Shout Mouse Press, the group of story coachers, illustrators and designers who collaborate with students, said Kathy Crutcher, the publisher’s founder.

The teens worked for about six weeks with story coaches and illustrators to bring their titles to life. Marisa Kwaning, a Virginia private school teacher, helped the team behind “Georgia in the Jungle.”

“Most of the kids have never done this before, so there’s a lot of doubt, and fear, and worries and just wanting to look cool in front of each other,” Kwaining said. “And then you get to see them dig deep.”

Kwaning not only gave writing advice but also coached students through challenges. When students disagreed over what to name a character or how to develop a plot, Kwaning “had to remind them it will be beautiful in the end,” she said.

In “Game of Pharaohs,” three students struggling in school learn how to persevere when they get trapped in a video game, said Camal Shorter, author and eleventh-grader at Coolidge High School in Takoma. Another book, “Money Marcus,” was written to teach kids that friendships and happiness are more important than money.

“Kids think that money makes the world go round but that’s not the case,” said Dewan Driver, a 16-year-old from Roosevelt High School. “Completing your goals is more important. We try to tell kids to be nice.”