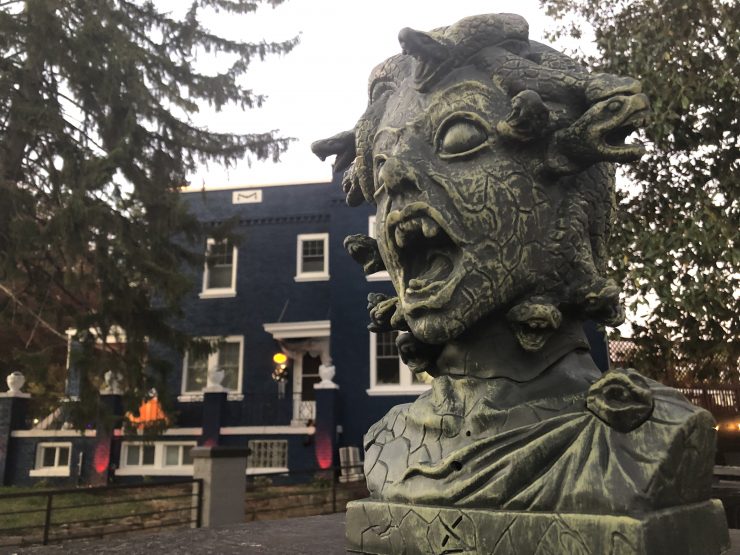 Neighborhood fun can change one day into weeks worth of preparation.

Fog, strobe lights, animatronics, all for one day of the year.

Michael Odle, who just moved to Petworth in January, serves as the first real competitor to a famously well-decorated Halloween house on the same street a few blocks down.

Odle’s inspiration began years ago while he was growing up in Seattle, Washington. As a child, he was unhappy with the low number of trick-or-treaters who visited the family home.

“We had a 100-yard driveway and so no one would ever come to our house and I was so disappointed that we never got trick-or-treaters,” Odle said. “So, what I would do is I started making these tombstones and I would line them down the driveway to entice people to want to come and trick-or-treat at our house.”

Now at his residence along Illinois Street, he has a yard full of hand-made tombstones made from plywood he purchased at a local hardwood store. His theme: a personal graveyard, where every fake stone inside is inspired by either a family member or a friend.

With this being his first Halloween at his new house, he spent hundreds of dollars on animatronics which are both sound and touch-activated.

“We have three or four people here every night taking photos. We got a crowd here when we turned everything on the other day. The only other house I keep hearing about is one down the street with like this ‘Pirates of the Caribbean’ theme and it’s pretty great.”

That comment sent The Wash to visit what residents simply call ‘the decoration house,’ a large blue residence on the corner of Sherman Park, with a huge yard owned by Curtis Gilbert and his partner.

Gilbert told The Wash that even though they decorate every holiday, the big ones are always Halloween and Christmas.

“We started decorating for Halloween with just a ship mast, then the next year we had extra wood leftover from a project we were going to throw it away, I said don’t throw it away. Let’s build a ship!”

The Sunday before Halloween, Ward 4 Councilmember Brandon Todd, does a Halloween parade at Sherman circle for the neighborhood kids. Usually, they all end up gathered by ‘the decoration house’ and play in the front yard.

“I come home and figure out ‘okay’, what’s broken? What needs to be mended, because they don’t mean to do anything but stuff happens, and I just fix it up for the main event,” Gilbert said.

Gilbert said he doesn’t spend “much” on the decorations, using home-made ideas like the pirate ship and an old organ propped up in his yard.  He told The Wash he stores his decorations but adds to them every year. He has a new animatronic monkey and cat on display this Halloween.

The neighbors of these long-time Halloween decorators say they had to do something when they saw what was happening next door.

Lauren Howard and Stuart Schmadeke also just moved to Petworth. They decorated their house previously when they lived in Shaw but have tried to step up their game with a bigger front yard.

“It’s usually a collection of things. I would say nothing is truly home-made anymore, is it? But, we cobble together stuff from a bunch of different places,” said Howard.

They’ve used traditional decorations from local stores, but what makes their yard stand out are the unique pumpkins lining their steps.

“We try to get all the pumpkins out and we do trips out to farms to get those,” Schmadeke said.

According to a National Retail Federation 2019 study, shoppers spend an average of $86 on Halloween, making it an 8.8 billion-dollar spending holiday. Those figures do not include the additional costs of candy.

These Petworth residents say they spend considerably more than that average, decorating their yards so elaborately that crowds form outside.

Regardless the elaborate decorations all of these neighbors have the same goal.

“A lot of people are asking are we having a party or something but none of that is happening. This is all just for trick or treaters, just for the kids.” Odle said.

Howard knows the next problem to solve is where to put it all once Halloween is over.

“This is our first year doing this so, storage is a major concern. So, we are trying to think creatively about how we are going to store all of this year-after-year,” Howard said.

Odle said he’s happy that he has a garage and no car.

Tonight the neighbors will be dressed up as witches and grim reapers as they expect over 600 kids to swarm their front steps looking for treats.

Here are a couple more houses decorated throughout the neighborhood.