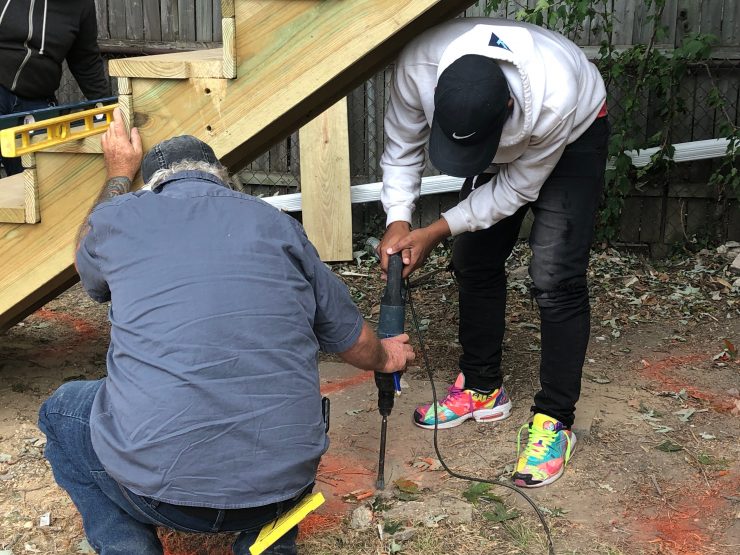 Usually it’s Timber Pizza that gathers crowds along Petworth’s famous Upshur Street, but now it’s the house next door that is drawing attention.

Youth Build’s first construction site to kick off their 2019-2020 school year is underway in the backyard of a women’s transitional house.

Student construction workers have come to the D.C. metro area over the past few weeks, to build a new patio ledge for the back exit of the Petworth home in need of repair.

The older patio was too big for the door frame to handle and slowly started to give, until it became a safety hazard and was removed.

Youth Build is a public charter school serving as an alternative high school for students between 16 and 24 years of age. In the program, students earn construction industry certifications or certifications equivalent to a high school diploma in certain subjects to get them started in the work force. There are currently 242 youth build programs in 46 states. To be admitted to the program you must be a high school drop-out.

One of three on-site instructors this week in Petworth was Antoine Clipper He starts off the day explaining to students basic tasks since many of the students are starting their first week out in the field.

Students first have to attend four weeks of training in the classroom before they are able to head out on-site to an assigned construction project.

“It’s a lot of the students first time, almost every day for the first few months, so they will just watch until they get the hang of it while others that have been here before or like it’s their second year or something will just jump in,” Clipper said.

Youth Build groups travel in cohorts, with one class starting a project and then others adding on until the entire site is complete. Georgetown and Virginia students have already laid the foundation of the patio steps and helped shape them, now Howard and Maryland groups are attaching the steps and digging to stabilize the support staffs for the next week.

Travon McCrae is in his first year of the program, he didn’t care for the traditional high school route, which would’ve consisted of attend Roosevelt High School. Tired of getting in trouble at Roosevelt he learned about this option from a friend already in the program.

“Once I found out, I enrolled as fast as possible cause I didn’t want to get sent nowhere else,” McCrae said. “I came here to change everything. And everything right here, they ask what you need, they got it for you, they supply for you. It’s amazing here.”

Clipper, who has been a teacher in the program for over seven years, comes from a family that deals in construction and learned all the skills he is now helping teach his students at a young age.

“The program helps, you know, it works. Everyone has different experiences and it gives students a chance to do something other than be bored at home, then going to try and find something to do. I got past students in construction, in D.C., making a way for themselves, so I know the program works,” Clipper said.

Youth build is housed under AmeriCorps, which is a national service opportunity organization that gets people actively engaged in building better communities. They are funded through local appropriations with an annual grant worth 89 million dollars that has to be re-applied for every 40 months according to the U.S Department of Labor.

“This right here is preparing me for the real world, so that I can know how to do everything and get the different certifications. They also pay you to come to school so that’s an extra reason.” McCrae said. “At first I wasn’t really in it, but now I like it because people will tell you that’s it’s hard, but it’s not really hard, once you start doing it and know what you are actually doing, you learn so many different skills over time.”

Eliza Meeks, a neighbor that has been watching the site says she has never seen work done so quietly and that she can’t wait to see the finished product of their hard work.

There are two more weeks left at this site until the construction is complete. Now that the steps are up they have to dig holes deep enough to put in the supporting staffs, and put in cement to keep them sturdy. After they plant the base of the patio and paint they will be on to their next assignment.