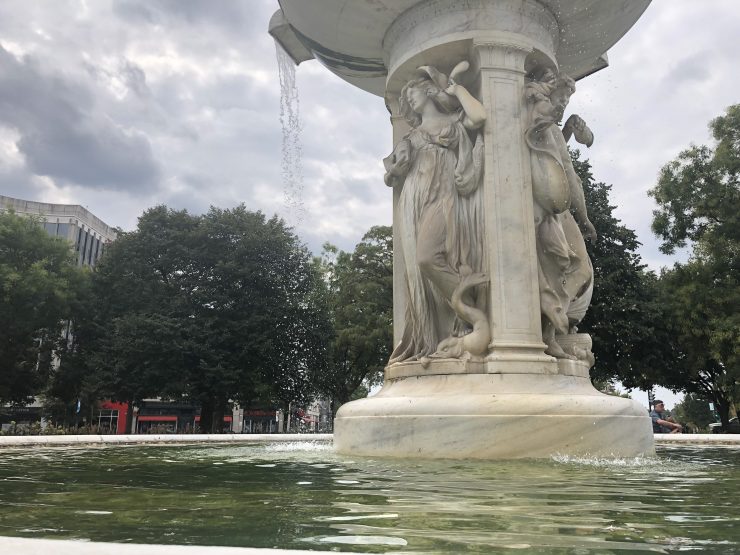 10 things you may not know about the Dupont Circle Fountain

A place for family, friends, people watching, entertainment and relaxation, the Dupont Circle Fountain and its surrounding sitting area is a key part within the nation’s capital. But the current sculpture was not always intact — the statue before it was removed because it was so “ugly.” Read on for more about the original statue and nine other facts you might not know about the fountain.

This original statue was made in 1884 to honor Frances’ service during the Mexican-American War and Civil War.

But many people complained about it because they did not like the way it looked, calling it “iron whiskers,” a reference to Frances’ facial hair.

Congress heard their cries and planned to remove the monument when residents of Wilmington, Delaware, offered to take it.

The sculpture still stands in Rockford Park with a plaque saying “Originally placed in Du Pont Circle – Washington, D.C. – It was removed to this site – A.D. MCMXX.”

2.  The Sculptor and Architect of the fountain also designed the Lincoln Memorial

The designers of the Dupont Circle Fountain were architect Henry Bacon and sculptor Daniel Chester French.

The Dupont Family commissioned French and Bacon to build this statue.

Bacon designed the Lincoln Memorial and French made the statue of Abraham Lincoln inside.

The Dupont Circle Fountain on a summer day in 2019. The original designers were architect Henry Bacon and sculptor Daniel Chester French, who both also worked on the Lincoln Memorial.

3.  The fountain represents the Sea, Wind and the Stars

The Dupont Circle Fountain was made to represent Greek mythology. The Sea, Wind and Stars are the three arts of ocean navigation, represented by two females and a male.

The Sea serves as a female figure with long hair holding a boat in her right hand, clutching a seagull on her shoulder with her left hand and her foot relaxing on a dolphin.

The Stars show a nude female with lingering hair, gripping a globe in her left hand.

The Wind speak for a male figure clothed in a ship sail. He is clenching a conch shell with his left hand to use as a horn.

Van Hilliard, owner of Luna Grill in Dupont Circle and 20-year resident of the neighborhood, believes this fountain is a key part of the District. “It’s a neat little epicenter of Washington D.C.,” Hilliard said. “It’s hard to imagine D.C. without that park.”

4.  The fountain was dedicated in 1921 with special guests

The ceremony revealed the new fountain to the public and was supervised by Lieutenant Colonel Clarence O. Sherrill. Episcopal Alfred Harding gave the invocation.

There were flags and shields at the ceremony to designate a VIP section that included First Lady Florence Harding, Secretary of War John W. Weeks and Secretary of the Navy Edwin Denby.

The Navy band performed music for all the guests in attendance.

5.  National Register of Historic Places lists the fountain in 1978

The National Register of Historic Place is a formal list of the United States most historic buildings, districts, sites, structures and objects worthy of preservation. This acknowledges more than 90,000 properties for the influence they had in American history, architecture, art, archeology, engineering and culture.

Since that time in 1978, Dupont Circle has undergone many changes itself.

Robby Bick, a 45-year resident of the neighborhood, has noticed changes over the past couple of decades. “The area has involved into more of a gay mecca,” Bick said. “It is still a youth area and it’s a lot richer then is was a long time ago. It also has a lot of homeless people with mental illnesses. You see 20 little kids running around and they could care less if that guy over there is homeless.”

6.  The fountain is one of 18 Civil War Monuments in DC

The order included statues of 11 Union generals and one Confederate general throughout the District.

These include but are not limited to the Nuns of the Battlefield Civil War Nurses Monument, Emancipation Memorial, Peace Monument, Stephenson Grand Army of the Republic Memorial and George Gordon Meade Memorial.

Constantine Seferlis has completed notable restorations in the D.C., including the National Cathedral, the Smithsonian Castle, the U.S. Capitol, the Washington Monument and the Smithsonian Institution.

Tara McCredie, general manager of Proper Toper, a restaurant on the circle, says the site is a good hangout spot. “I know that the bike messengers hangout there and have been for years,” McCredie said. “My husband used to be a bike messenger. So, it’s a spot where people take a nap in between runs.”

8.  The fountain was temporarily relocated in 1948 due to streetcars

A streetcar underpass was under construction beneath Dupont Circle after WWI.

Due to the maintenance, the fountain had to be removed from its location for two years. When it was moved back, the pumping system for the fountain was replaced.

However, the workers forgot to connect the pipes so it did not function properly. The problem was solved the following year.

Instead of clear, clean water, locals walked by the fountain to see a sea of green residue in the summer of 2016.

People complained to the National Park Service and after coverage by the media, workers came out to figure out the problem.

The result: a clogged intake line from pipes in the fountain.

On a sunny Monday in 2018, instead of clean, reflective blue, the fountain’s water had turned red.

The National Park Service was not aware of the problem until it gained social media buzz.

This was the result of a red-powdered dye that had been added to the fountain. The fountain was drained, filtered and refilled by the next day.

To this day, it remains unknown who added the dye and for what reason.