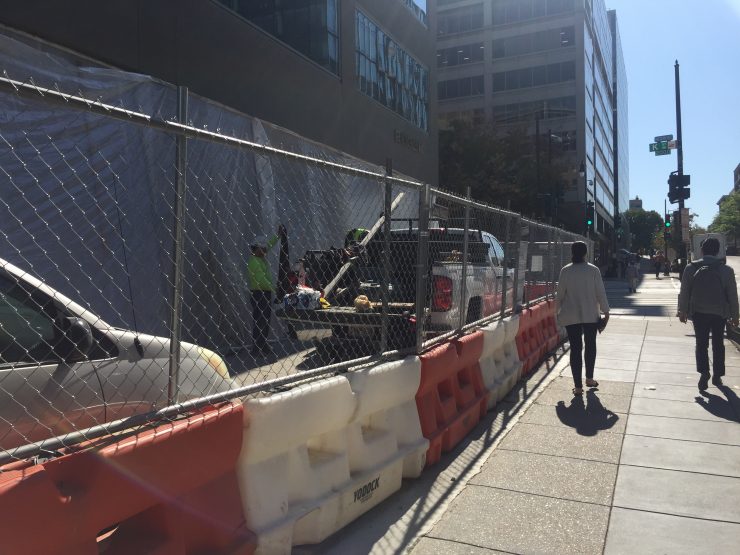 With 333 obstructions, Foggy Bottom ranks in the top 25 percent of neighborhoods in the District with the most sidewalk obstructions.

The condition of sidewalks in Foggy Bottom are posing a problem for the community, especially those in wheelchairs. An online analysis of D.C. neighborhoods by Greater Greater Washington shows that Foggy Bottom ranks five on a scale of severity of obstructions, five being the most severe.

The analysis also shows that the neighborhood ranks 28 out of 111 in the District, with one being the worst. The sidewalk problems range from broken walkways to a lack of curb ramps.

ANC Commissioner Patrick Kennedy said he receives frequent complaints about the safety and accessibility of the sidewalks.

“We have a lot of sidewalks in various states of disrepair,” Kennedy said. “It’s very difficult for seniors and people of any sort of physical disability to navigate these areas.”

The analysis notes that, surprisingly, the more affluent neighborhoods, like Foggy Bottom, have the most sidewalk issues compared to the lower-income neighborhoods.

In many cases throughout the neighborhood, the sidewalks are blocked by abandoned debris, scooters and trash cans, with over 12,000 blocking D.C. sidewalks. The most common obstacles are those from construction.

Kennedy finds there are a lot of short-term sidewalk impacts related to construction projects that have taken much longer than initially planned.

“There is a lot of pent-up frustration about that,” Kennedy said. “Unfortunately, they have a maintenance backlog city-wide. They have not been getting to projects in our area as quickly as we would like to see.”

The poor sidewalk conditions have made it especially difficult for those who are unable to simply walk around the obstructions.

“We receive complaints particularly when construction is occurring,” McCollough said. “We work closely with the Americans with Disabilities Act to address the inaccessible path-of-travels, and we find that the sidewalks often don’t meet the ADA requirements.”

Mary Jacobs, a Foggy Bottom resident who uses a wheelchair, has found on several occasions that sidewalk barriers are not always possible for her to maneuver.

“It’s dangerous for me when there’s anything blocking the way,” Jacobs said.  “I can’t pass without moving into the street.”

ANC Commissioner Kennedy said that there are a lot of ADA issues in the community.

“I have sidewalks in my single member district that are completely non-ADA compliant,” Kennedy said. “There are a lot of unresolved ADA issues.”

Kennedy said he also receives complaints from senior citizens with limited mobility and from people pushing strollers or carrying luggage who also struggle with the blockage.

For people like Jacobs, these inaccessible sidewalks make some areas almost completely avoidable.

“I’ve called a couple different times and it never seems to be fixed,” Jacobs said. “This is about our safety.”