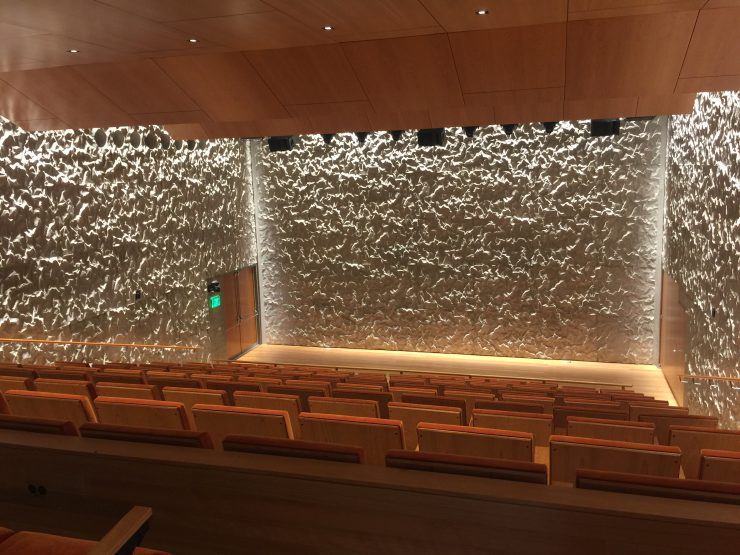 The Kennedy Center gets more personal with The REACH

When the John F. Kennedy Center first opened in 1971, its first reaction from critics and patrons was intimidation. The tall, marble monument was not necessarily a place to come and relax, but to simply sit, watch an opera and go home.

The problem, according to director of External Events, Megan Cikara, is that the Kennedy Center is so isolated from everything else in the District.

“People were never just stopping into the Kennedy Center to hang out. We wanted a performing arts space where people could come, feel at home, and stay for a while just any time during the day.” Cikara said.

The REACH, the Kennedy Center’s new expansion was made to do just that. Designed by Steven Holl Architects, the 4.6-acre project allows people to engage with the artists and watch their performances.

“There is no backstage in the REACH,” said director of Public Relations, Michelle Pendoley. “When you see the four walls in each of these studios, that’s the studio. You’re able to watch a full-fledged rehearsal of someone you would only ever be able to buy a ticket to.”

When current president Deborah Rutter first came into her position five years ago, the conversation for an expansion had already started over half a decade before, with many delays along the way.

There were many iterations of what the architecture would actually look like. The river pavilion itself was actually on the river.

“It was an idea between how the performing arts is moving into more of an artist-audience centered base,” Pendoley said.

There was a hybrid of needs to be met, including more rehearsal space and dedicated education rooms.

The 72,000-square-foot expansion is made up of three connected buildings that can be used for rehearsals, meetings, classes and concerts. It has already hosted a wedding for one of their employees before the building even opened.

Starting Sept. 28, parents can bring their kids to the Moonshot Studio every Saturday for an interactive learning experience working with art and learning about the artistic process. The workshop is meant to teach communication skills to parents and their children as they play.

The REACH surpassed its $250 million fundraising goal through Chairman David Rubenstein’s efforts two days before its opening festival. Besides his own $50 million contribution, the donations came from a campaign that the center launched over the summer.

The free, 16-day festival introduced the community to the new expansion by hosting hundreds of different themed events. The festival saw over 100,000 people during the 16 days.

The festival featured everything from comedy showcases with Patton Oswalt and Rachel Dratch to dance workshops hosted by choreographer Debbie Allen. Patrons could also attend a morning yoga session and see the National Symphony Orchestra rehearsing with Broadway performers.

However, the festival was less about the opening of the expansion and more about what happens after.

“We had to make sure that the festival stayed with the people after they left so they would want to come back,” Cikara said.

The festival was meant to connect the community with the expansion so residents will keep coming back long after. It was a also a preview for the many more events the REACH is hosting in the coming year.

On Oct. 7, The REACH’s first exhibition, Portraits of Courage, will open in Studio K, the center’s largest studio. A collection of 66 paintings of George W. Bush will be on display through November.

In January, Studio K will turn into “The Club at Studio K,” a jazz lounge on the weekends. Guests will be able to watch spoken-word performances or a jazz show.

The South Plaza, still being constructed, will host Millenium Stage performances, including graffiti artists and spoken words. Usually held indoors in the traditional building, the event will be held outside for the first time in the South Plaza.

Walking into the Welcome Pavilion, people can be seen sitting in the lounge chairs or at small tables doing work. Hannah Schneider used the quiet atmosphere of the Pavilion to complete a job application.

“I came to the festival and I got to see the place, but I wanted to be here when there isn’t a crowd of thousands of people.” Schneider said.

While the REACH staff is still coming down from its grand opening, they are still ambitious in their goals for the coming years. The name of the expansion is a nod to a JFK reference about “reaching” up and looking toward the future.

“There’s an atmosphere of being able to adapt some of the things we have always done,” Cikara said. “But we’re always looking ahead at what we can do next.”