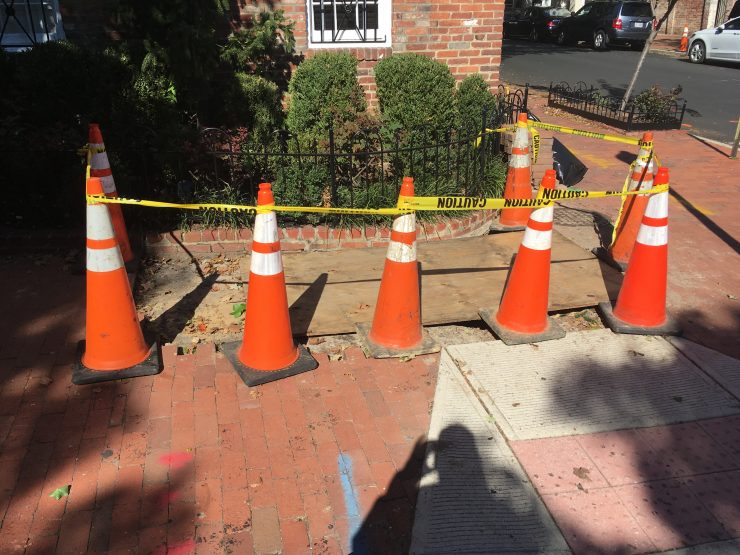 Edward Segal has spent the past two years tracking almost 60 gas leaks in his Georgetown neighborhood.

Edward Segal has spent every Saturday for the last two years on the hunt for orange traffic cones, broken sidewalk pavement and the telltale Washington Gas trucks.

Segal, an almost-30-year-resident of Georgetown, quickly learned to look for the signs of a natural gas leak. We followed along with him on his hunt one weekend in October.

Tracking the gas leaks through the streets  “is like trying to read hieroglyphs,” Segal said as we walked along the pavement with our heads bent towards the asphalt.

Segal began tracking the natural gas leaks in 2016 after a series of leaks occurred in front of his own house, bringing a crew of Washington Gas company workers to the street outside.

Curious to see how long the repairs would take, Segal called the company.

“They had no record of coming out in the first place,” Segal said. “What does that say about Washington Gas that they didn’t even know repairs were being done, let alone when it would be finished?”

Realizing he would have to find out the truth for himself, Segal began hunting for signs of natural gas leaks in the neighborhood while walking his dog.

Segal’s passion for tracking his neighborhood’s gas leaks has only increased since the September gas explosions in the Merrimack Valley of Massachusetts, which left one person dead and 23 injured. The blasts happened after the natural gas system over-pressurized, causing gas to leak into the homes. This resulted in a reported 80 explosions.

“This is a public safety concern. This can happen at any time and anywhere,” Segal said. “We shouldn’t be lulled into a false sense of security.”

Since Washington Gas is not required by law to release their data on natural gas leaks to the public, it can be hard to verify how many leaks have occurred. But according to Segal, there have been 59 natural gas leaks in Georgetown since 2016.

“That’s the tip of the iceberg because in my mind there are some doubts on how those leaks are collected and reported,” Segal said.

Bernie Tylor, media relations manager at Washington Gas, said despite not releasing details on the distribution system or leaks, “the number of repairs we make are fairly consistent year over year.”

A symptom of a larger problem

Nearly 6,000 natural gas leaks have occurred under the District’s streets, according to a 2014 study by Duke University and Boston University. A dozen of the leaks were so strong they posed explosion risks, researchers found.

“That was a conservative estimate. I think there were more than 6,000 leaks,” said Bob Ackley, a leading gas safety expert and researcher involved in the 2014 study. Based out of Massachusetts, Ackley has traveled throughout the country studying the natural gas system of cities like Cincinnati, Manhattan, Boston and D.C.

Ackley said the condition of the District’s gas system was one of the worst he had seen. We asked him if what happened in Merrimack Valley could occur in D.C.

One Georgetown resident we spoke to, Evan Sheres, said he recently experienced a gas leak so strong that he could hear the gas leaking through the main line.

“We make immediate repairs for any leak deemed potentially hazardous and schedule non-hazardous leaks for future repair,” Tylor said in an emailed statement.

D.C. and other large cities throughout the east coast have some of the oldest natural gas lines in the country, according to Ackley, making Washington Gas’ attempts to keep up with the repairs is a race against time.

“They’re under the gun with a leaky system,” Ackley said.

A call for transparency

While Segal is concerned by the many leaks occurring, he said his main frustration with Washington Gas is the need for company transparency and a maintenance request tracking system.

For example, Segal tracked roughly eight gas leaks in the 3000 block of Dumbarton Street and 30th Street in early October. It was the largest series of leaks he’d seen in three years.

“If they’re not hiding anything and everything is fine, tell us,” Segal said. “Bottom line is: full disclosure so we know what’s happening beneath our streets.”

“If we are making repairs in a neighborhood, we notify impacted customers directly to inform them of the work,” Tylor said. “Providing safe and reliable service to our Washington Gas customers is our top priority.”

Yet, walking down Dumbarton Street, there are signs of torn up sidewalks, unfinished brick repairs and metal plates in the middle of the road. To Segal, this is further evidence of the need for a system to track Washington Gas maintenance requests and ensure accountability.

In an effort to create reform, Segal has attended city council meetings, spoken with city representatives and presented at Advisory Neighborhood Commission meetings. He wants legislation that demands full disclosure from Washington Gas in a timely manner.

Segal hoped the scrutiny following the explosions in Merrimack Valley would put added pressure on the District’s city council to pass transparency reform.

For Ackley, the slow-moving nature of gas-safety reform is unsurprising. Natural gas companies, like any big business, are more concerned with their budgets, according to Ackley.

“It’s shirking maintenance whenever you can. Leaks are something that gets pushed aside,” Ackley said.