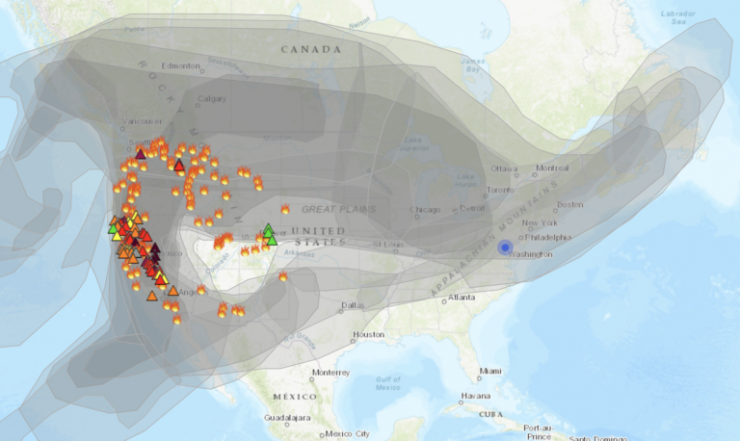 Wildfire smoke is visible from the East Coast. District public official says the smoke is too high up to cause any health risk to residents.

While dozens of wildfires raged on the West Coast this summer and fall, Washington D.C. residents, at times, awoke to a smog-filtered orange sun. Smoke traveled across the United States by riding the jet stream to the East Coast.

The Wash reached out to the District’s Department of Energy & Environment to see how these fires could affect local residents.

Kelly Crawford, the associate director for air quality, said, “the traveling smoke layer is generally confined to a few thousand feet above ground and is not impacting the air quality at ground-level.”

The District works with Maryland and Virginia in monitoring fine particulate matter in the air. In cases where pollution reaches unhealthy levels, warnings and alerts are issued to the public.

The District also operates a ceilometer (a device for measuring and recording the height of clouds) and monitors upper air measurements. Although these measurements did show smoke travel to the Mid-Atlantic from the West Coast, the monitors did not measure “any spikes that can be readily linked to the smoke caused by the wildfires,” at the ground-level.

Per the advisory, “Wildfire smoke is a mixture of small particles, gases, and water vapor. Small particles are the primary health concern.”

Health experts recommend staying indoors and avoid strenuous activity outside. Children and those with sensitive conditions should avoid going outside all together if possible.

Marika Mousheghian, a resident of Glendale, CA, said her lungs have always been sensitive and the smoke from wildfires prevent her from leaving her home.

“When the wildfires come, I have to be indoors. I can’t do anything. I can’t go shopping. I can’t go outside. I can’t walk my dog.” If she needs to drive out somewhere, it has to be far enough away that the smoke doesn’t affect the air quality.

The poor air quality combined with the pandemic has complicated things for Marika. Social distancing while “going outside is the only thing you can do,” during the pandemic. The smoke prevents her from even sitting in her back yard with her family.

The wildfire in California escalated on August 15, with certain areas that continue to burn today.

As of September 28, there have been 26 fatalities and over 7,000 structures destroyed. Over 8,000 fires have destroyed 4.76 million acres of land. According to the California Department  of Forestry and Fire Protection, this year’s wildfire season is the largest recorded in California history. Although progress has been made, there are still red flag warnings in parts of northern and southern California.

District residents can breath easy and enjoy the strange sight of a smokey sunset. If air quality levels are seen to be a health risk, residents can expect alerts and updates from Clean Air Partners.