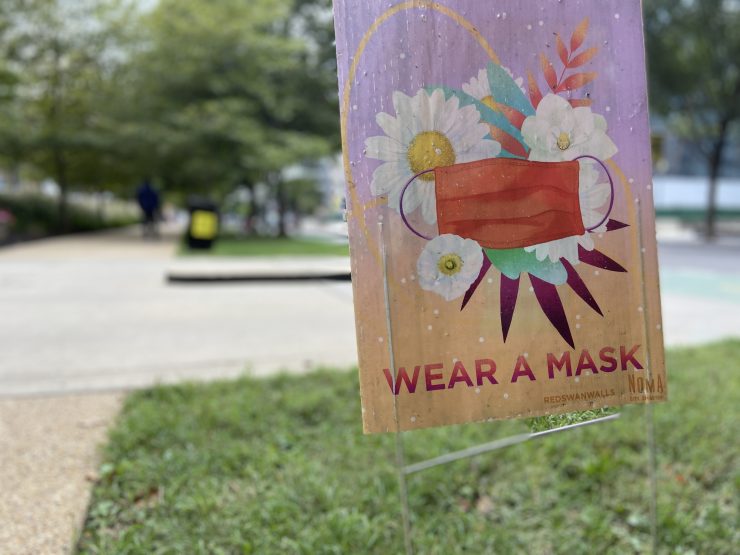 The NoMa Business Improvement District (BID) has announced it will launch a second phase of their Wear a Mask campaign featuring banners with a masculine-driven design.

The first phase of the campaign, which launched four weeks ago, distributed 600 posters and 100  yard signs designed by local artists with the purpose of reminding the community to wear a mask to prevent the spread of coronavirus. The designs showed art that was directed at or featured women.

“We did feel men were underrepresented in the designs, so we actually have one coming out soon,” Robin-Eve Jasper, president of the NoMa BID staff, said.

National polling by Pew Research Center showed that 87% of women were wearing masks compared to 83% of men while visiting businesses during the pandemic.

The designs that came out were done by different artists: Kelly Towles; Tenbeete Solomon, known as Trap Bob; Michelle Shiyu Chen, known as Shiyuart; and Red Swan Walls, made up of Hanna Moran and Lindy Swan .

Towles, who has worked with the NoMa community in the art festival POW! WOW! D.C., was approached by the staff organizing the campaign, and he contacted the other artists.

The artists of the posters were not given specific requirements for the creation of the designs, the Director of Marketing and Communications Sherri Cunningham said, “We wanted to respect their creativity.”

The focus for the NoMa BID staff was that the message of awareness was communicated through the concepts.

Towles’ design shows a woman wearing a red mask in an urban wall setting. That goes along with other designs he has been working on, he said.

The poster designed by Red Swan does not contain any words and  features a mask surrounded by flowers.

Trap Bob, who illustrated a Black woman holding three masks, said she  “always feature Black women in my work so I created a fun character wearing a mask and standing in a pose that creates a call to action.”

The fourth design, created by Shiyuart, features a Black mother putting a mask on her Black daughter.

A NoMa resident who commented her opinion to The Wash said that Shiyuart’s design was her favorite because it went along with the Black Lives Matter movement.

“Right now, I feel like it’s a positive message about Black people, it’s not the way they’re usually portrayed,” the resident said about the poster which she remembers the most.

The NoMa BID staff have received feedback from people outside of the community as well, Cunningham said she received an email from a person in Orlando, Florida admiring the campaign.

“It’s been a great reminder for people to put masks on, in a cool artistic way,” Elliot Howe, the director of operations and human resources of Wunder Garten, said.

Wunder Garten is one of the establishments handing out posters, along with other food vendors and fitness business like  Yoga NoMa and NUBOXX Fitness.

The idea for communicating the message creatively came from the community’s involvement with art throughout the years.

“Our experience with art is that it really is, in some ways, like public space, a shared public experience,” Jasper said about their approach.

The NoMa BID spent $10,000 in the campaign, which was distributed into printing the first round of 600 posters and the commissions given to each artist.

A second round of 600 posters and 100 yard signs are being printed to distribute in the community in the same locations that have participated in the campaign since Aug. 26.

The NoMa BID will also hand out nondisposable masks as part of the second phase of the campaign. 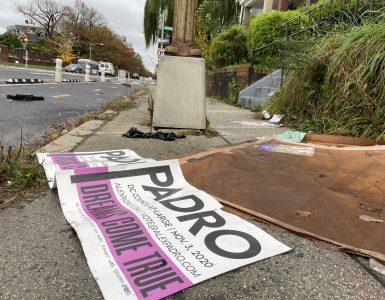 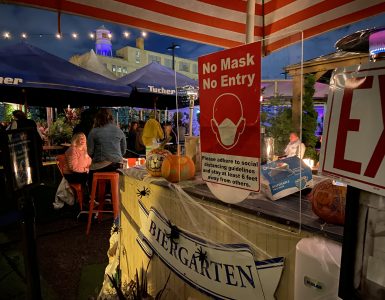