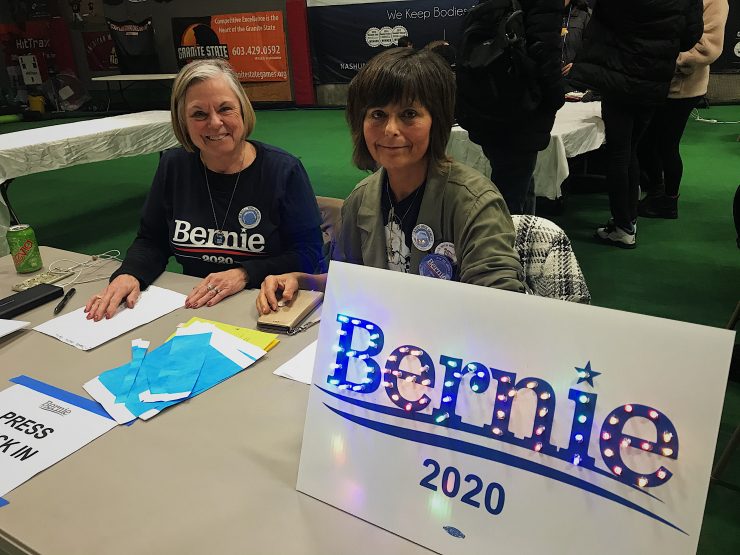 Sanders supporters rallied for the progressive Democratic nominee during a debate watch party on Friday.

MANCHESTER, N.H. — Over 100 Bernie Sanders’ supporters, including documentarian Michael Moore and Ohio Sen. Democratic Nina Turner, packed into a crowded sports complex on Friday night to watch their favorite candidate compete in the final debate before the New Hampshire primary on Tuesday.

Moore, who acted as a Sanders surrogate at the event, pleaded with the crowd to talk and listen to their neighbor between now and the primary on Nov. 11 about their struggles with the health care system and corruption in the nation’s capital.

“I’m here as a citizen to work, to help him get elected — not here to make a movie,” Moore said. “His whole platform is my canon of films from the last 30 years.”

Voters at the event, including Makayla Haynes, 21, said that Sanders’ Medicare for All plan is a huge reason she supports his candidacy.

As a hairstylist, Haynes worries about needing to pay for her own health insurance once she ages out of her parents’ plan in five years. Often insurance is too expensive for independent businesses, such as the Five Diamond Salon where she works, to pay for their five employees. Hayne says she can’t imagine bearing the cost of insurance on her own.

“My father pays 10 grand for half of my family’s health care right now,” she said. “I can only imagine, from, like, a business owner’s standpoint, that would probably be like over 30 grand, 40 grand.”

This primary will be Haynes’ first time voting. In 2016, she had just turned 18 when the primary rolled through New Hampshire, and she said as a high-schooler, she was not as politically engaged as she is now.

Sanders’ candidacy this time around changed all of that. Haynes first became interested in the senator’s campaign after hearing rumblings about his independent policy stances, small-donor fundraising efforts and emphasis on his supporters’ needs rather than his own candidacy.

Other candidates want to win because they think they’re the best candidate. With Bernie, Haynes says, “It’s like an ‘I want us to win because I want to help you help yourself’ type situation.”

Lisa Shapiro, a stay-at-home mom from Long Island who also attended the watch party, echoed a similar sentiment. Shapiro drove up with two of her daughters to help drive canvassers for the campaign in her 12-passenger van.

What makes the six-hour drive north for the weekend worth it? Shapiro sees herself as a progressive first and a Democrat second, she said, adding that Sanders is the one who can move the country forward. She said she sees his platform as one built on “common sense issues.”

“I really feel like it would be a significant enough change that we really see something change in the favor of like the working class,” Haynes said. “Because we make up, like, almost an entire whole of the county.”