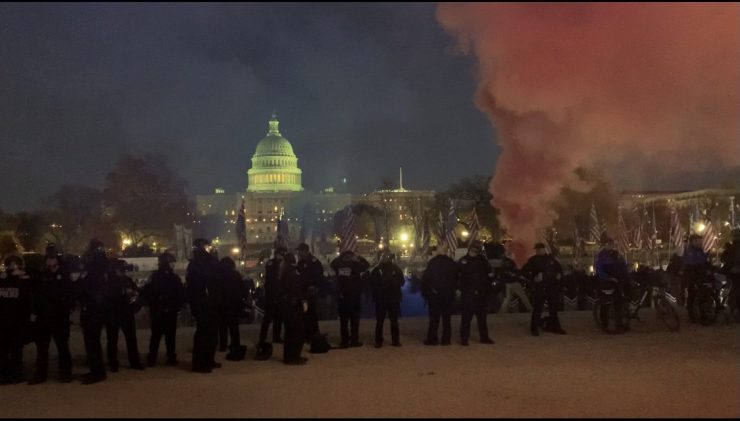 A white nationalist hate group descended on the National Mall, sparking immense police presence. However, the demonstration was eclipsed by a disorganized departure which caused significant traffic disruptions.

A group of white supremacists paraded across the National Mall chanting “reclaim America” early Saturday evening at an unannounced demonstration.

Over 100 Patriot Front members descended the steps of the Lincoln Memorial to the beat of a snare drum, bearing American Flags and shields. They wore uniform outfits of khaki pants, dark blue sweatshirts and sunglasses.

The Wash arrived on the scene at 4:45 p.m. as plumes of red smoke the demonstrators had released enveloped the Washington National Monument on their way towards the Capitol.

Michael Litterst, spokesperson for the National Mall, said that no permit application was received for the demonstration.

Patriot Front’s presence initiated a swift response from law enforcement with bike patrol and police vehicles flanking the demonstrators from each side while officers in ballistic vests carrying rifles followed from behind.

One police officer told The Wash, “I have no idea what this is about; we just got on our bikes and followed like we were told.”

Police also made quick work of sealing off entrances to the Mall.

The rally sparked both fear and curiosity from bystanders, some of whom began to trail the demonstrators beside the police.

Activist Luke Kuhn was at a Black Lives Matter protest when he got an emergency notification about the demonstration at the Capitol. He said he warned others to stay away but wanted to confront the group. “This is the first time Neo-Nazis in combat equipment have been to the Capitol since Jan. 6.”

“They brought shields. They mean violence,” he said.

When the demonstrators finally stopped in front of the Capitol reflecting pool, leader Thomas Rousseau began to speak, but spectators began chanting “shut the f***k up” to drown him out.

According to the Anti-Defamation League, Patriot Front generated approximately 80% of racist, anti-semitic and other hateful messages tracked in 2020.

As spectators’ chanting intensified, demonstrators began beating snare drums to obscure their voices, and police formed a barrier between the two groups.

The demonstrators also released blue and red-colored smoke, and spectators covered their faces with masks or jackets to prevent inhaling it.

Barjhav Sivagaru, a D.C. resident, said he was sitting next to where the smoke was set off, but the wind blew it the other direction. As he walked on, he said he began encouraging others to wear masks.

Colored smoke engulfed the Mall from the Capitol to the Washington Monument by the time the demonstrators began their trek back to the Lincoln Memorial.

Bystander Laura Opsahlong said she and her friend were sitting on benches eating hotdogs when the demonstrators passed. “I was shocked by their presence right in front of me. It was scary how in sync they were – it seemed like a legit militia group.”

According to The Daily Beast, Rousseau said, “Our demonstrations are an exhibition of our unified capability to organize, to show our strength,” when asked about the reason for the demonstration.

Ironically, the coordinated effort ended with dozens of demonstrators stranded at the roundabout across Arlington Memorial Bridge, since the U-Haul rented for transport could not fit them all.

The U-Haul made multiple trips over the course of hours while demonstrators waited silently and shrouded in darkness with their shields up, surrounded by police monitoring the scene.

Metropolitan police sent out a statement after the event concluded that stated in part, “The assembly took place without any incidents or arrests. MPD will continue to monitor and assess any activities and plan accordingly with our federal law enforcement partners.”