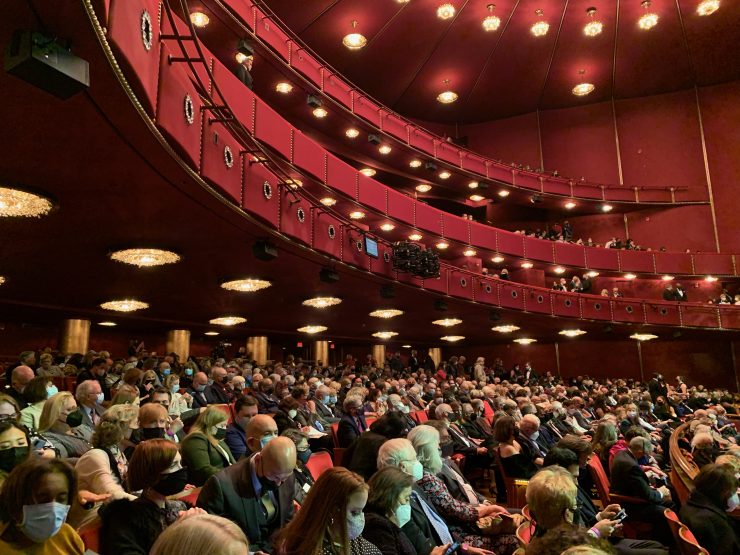 Susan Rogers sat in her “usual seat” during the Washington National Opera’s first opening night at the Kennedy Center in nearly two years.

Rogers, a long time D.C. resident, described her reason for regularly selecting seat C18 — on the right side of the floor, midway between the opera house doors and stage.

“One might think you want to be closer, but the sightline is great,” she said, extending her arm towards the stage to demonstrate the angle.

Opera-goers and Kennedy Center fans flocked to the theater on Saturday, Nov. 6, for the program called  “Come Home: A Celebration of Return.”

A tribute to the late Ruth Bader Ginsberg, the performance featured songs from some of her favorite operas.

The audiences’ excitement was palpable as conductor Evan Rogister emerged on stage, raising his arms to the thunderous applause of a full opera house before engaging the orchestra.

The evening opened with the overture to Wagner’s “Meistersinger.” A montage of images depicting the Kennedy Center’s construction played alongside the ensemble.

Following a few pieces, Chairman David Rubenstein materialized from the left stage door and assumed the podium beside it to address the audience.

The Kennedy Center “went dark” in March of 2020, he said, and was essentially closed for 18 month due to the pandemic.

Rubenstein credited patrons for making it possible for programs to return this season. “Many of you have been extremely generous in the last months,” he said.

Tim O’Leary, general director of the Washington National Opera, told The Wash, “Every single person was needed to get us back to the Opera House stage.”

Many ticket-holders donated their tickets instead of seeking refunds, O’Leary said, and donors kept subscriptions even when “we could not offer them performances to attend.”

The Center lost over $80 million in income that would have been generated from the 2020-2021 programs, Kennedy Center President Deborah Rutter said in a press release. She said a “strategic focus” on contributions became crucial while waiting to re-open.

Opera aficionado Rogers kept up with the subscriptions offered at the Kennedy Center during the pandemic, booking “all of them” for 2021 through 2022.

“It helped me get through the pandemic to support the Kennedy Center in the ways I could,” said Rogers,  “in the hopes that the opera would be back.”

The Kennedy Center is funded through a combination of earned income, donations and endowments.

The Center’s total operating revenue in 2020 was $152.6 million, with programming and contributions comprising over half of that revenue at $114.8 million, according to its 2020 report.

Performances and programs vital to the center’s revenue stream were canceled due to pandemic restrictions in the latter half of the season.

Although the Kennedy Center received $25 million in federal stimulus aid and allocated $22 million to employee compensation, benefits and contract fees, it sought to furlough 60% of its full-time staff in the spring of 2020, according to a press release.

O’Leary said, “The economic situation was truly changing for artists and arts organizations over the past 20 months.”

A grievance was filed by the D.C. Federation of Musicians when 96 National Symphony Orchestra musicians were told they would be furloughed with less than a week’s notice, said Federation President Ed Malaga.

He added that the Kennedy Center and union had entered into discussions about symphony musicians’ compensation, expanding to include opera and opera house orchestra musicians.

O’Leary said agreements with the artists’ unions allowed musicians and singers to be paid to the “extent possible,” despite not offering them much work.

The agreement reached kept musicians employed through the season with 75% of their salary and health benefits, Malaga explained.

However, he was “deeply disappointed” with the approach the Kennedy Center took towards their performers. At this time, Malaga said they had just received $25 million in CARES Act money and finished the REACH center, which raised $250 million as a capital funding campaign.

From my perspective, the Kennedy Center is our National Cultural Center. It’s our National Performing Arts Center. As such, I believe that they have a duty as part of their mission to be protectors and advocates of artists” – Ed Malaga, president of the D.C. Federation of Musicians

The Center’s mission is to provide these arts, Malaga said. “I think supporting these artists through this time of crisis would have been a signal to other arts organizations—they abdicated their leadership, fundamentally.”

Now, the Kennedy Center has returned with a “full complement of programs” including opera, music, dance and potentially arts education, according to Rubenstein’s remarks.

Malaga said he hopes the Kennedy Center will live up to the words of JFK etched on the façade of the building.