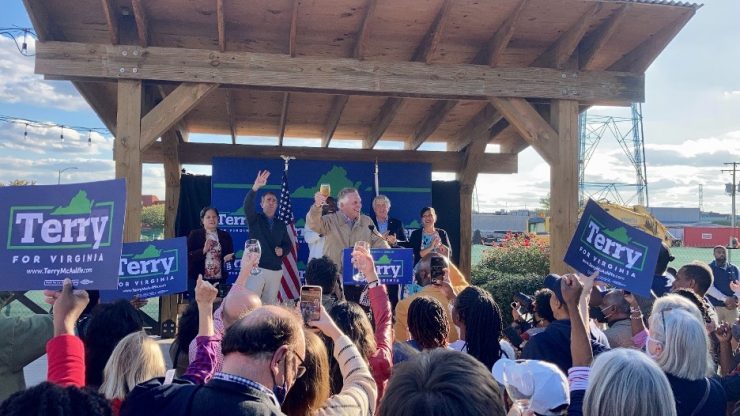 Update: With 98% of votes counted, Republican Glenn Youngkin has 50.89% of the vote for Virginia’s gubernatorial seat. Democratic candidate Terry McAuliffe has 48.42% of the vote. At least 3,257,029 residents of Virginia voted on Tuesday.

By Madeline Buschang and Jonathan Bock

HENRICO, Va. –– On a sun-drenched Saturday in the suburbs of Henrico County, Democratic voters milled about waiting to attend a backyard rally for Democrat Terry McAuliffe. Although the weather conveyed a sense of serenity, Democratic anxiety was palpable.

In the closing days of the gubernatorial election, the race has taken a dramatic turn. While McAuliffe enjoyed an eight-point lead over Republican Glenn Youngkin only a few short months ago, the race has tightened. Polls show the candidates locked in a dead heat, with Youngkin overtaking McAuliffe for the first time in FiveThirtyEight’s polling aggregate. With early voting in the rearview mirror, all eyes turn to election day, where Democrats struggle to bridge an enthusiasm gap among voters.

Former Republican consultant Tucker Martin sees the polls as reflective of the energy on the ground. “Momentum is indisputably on the Youngkin side. That’s not made up. You look at rally size and you look at the polls, there’s an enthusiasm gap.”

When asked why McAuliffe supporter Anne Patton had a reason. “People aren’t as enthusiastic, obviously, because you know things haven’t gone very quickly,” she said regarding President Biden’s lack of progress on the infrastructure bills in Washington.

But Democratic leaders are projecting confidence. “Early voting has been incredible. Higher than we thought it was gonna be. I’m not too concerned,” said Andrew Whitely, executive director of the Virginia Democratic Party.

It is true that early vote totals were significantly higher this year than they were in similar off-off-year elections in 2017 and 2019. 1.14 million votes were cast early this year compared to 196,000 votes cast early in 2017. The difference, however, is due in large part to new early vote laws passed by the Democratically-held House of Delegates, which allows for a 45-day early vote window and no-excuse absentee ballot voting.

Pundits are noting that this year’s early vote total lagged behind that of 2020 when 2.81 million people voted early and enthusiasm surged. The significant drop-off has Democrats nervous. In a state where demographics have radically changed the political landscape, giving Virginia a bluer hue, turnout for Democrats is paramount.

Many Democratic voters worry the numbers aren’t there.

Helen Auton, a lifelong resident of Henrico County, has noticed a difference this year. “I’m surprised at all the Youngkin signs in the neighborhood. I’m really disappointed,“ she said. While she still feels enthusiastic to vote for McAuliffe, he’s not the candidate who excites her. “I am enthusiastic to vote against [Youngkin]. Like Biden, [McAuliffe] wouldn’t have been my first choice, but that’s all we got.”

She wasn’t the only one to voice concern. The 68-year-old Caleb Campbell believes this lack of energy will deliver the victory to Youngkin.

A spokesperson for the Youngkin campaign agreed, saying, “We’ve seen a ton of enthusiasm. Our events just continue to grow in terms of overall participants. And you drive around your different neighborhoods and see enormous amounts of signs.”

Democrats are working hard to close this gap in the final days. Some voters feel it is working. Terry Jones, a Virginia public school teacher, said he’d seen more excitement in the last two weeks as election day moves closer. He said of the race, “People have been waking up and they realize what’s at stake, so I’ve seen that enthusiasm gap very much close.”

Whether Democrats’ final push will do enough to deliver McAuliffe a victory on election day is yet to be known. But the question remains for Virginia Democrats whether demographics equals destiny. As Henrico resident, Barbara Namias summed it up, “I know people that are voting for Terry. I think they’re just exhausted.” 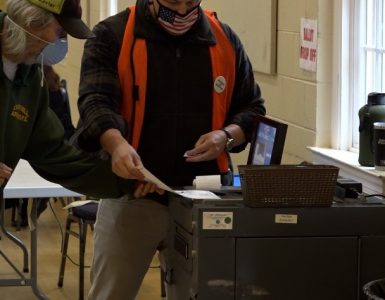 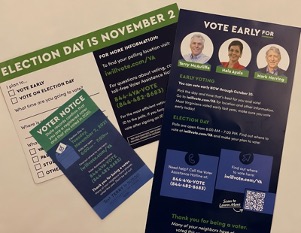 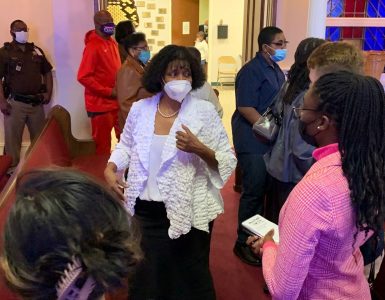