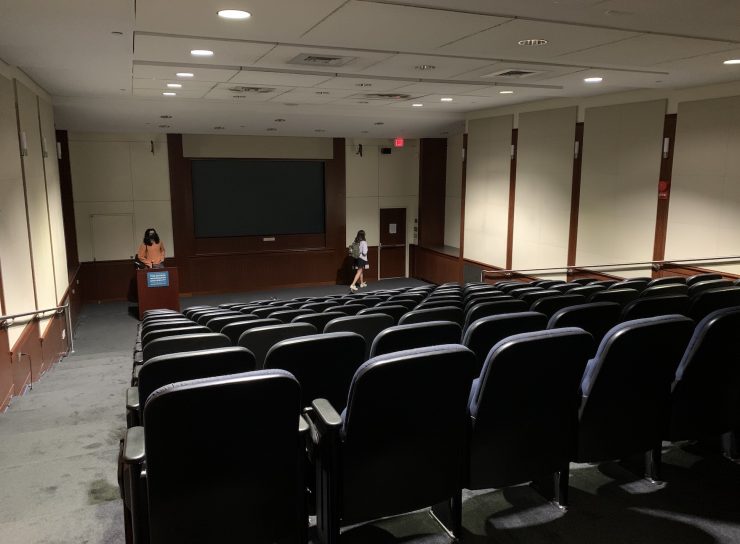 Sexual assault survivors were given a platform to speak to administrators about the way university practices failed and continue to fail them in the aftermath of their assaults. A student organization proposed the listening session after student activist group “GW Protests Rapists” held a protest during commencement.

Feelings of solidarity, frustration and fear filled the room when survivors shared their stories about the harm caused by George Washington University administrators’ actions and inaction in the wake of sexual assaults.

This “listening session” marked the first time the organization Students Against Sexual Assault had been able to get GW administration in the room to hear about students’ experiences.

Students and administrators alike filed into the small Amphitheater, tucked away on the third floor of the Student Center, slowly Wednesday evening, appearing nervous of what to expect from the session.

SASA Co-President Will Hoadley-Brill waited for a lull in conversation to address the gathering of students and GW representatives. He thanked the 27 campus organizations that co-sponsored the event and the administrators in attendance.

Taking the time to list each administrator by name, title and office, Hoadley-Brill said, “I wanted to recognize these folks by name, because this is a listening session for everybody who’s here in this space, and we are looking to move forward collaboratively.”

“The goal of this event is to allow survivors to have control over their own experiences and narrative,” Hoadley-Brill said. He says the space will attempt to address the “harm perceived to be caused by GW administration’s policies and offices, to be stated, acknowledged and processed.”

“Today, we are just here to be able to identify and acknowledge harm,” Hoadley-Brill said.

The final opening remark came from Claire Coleman, the director of the Office of Student Rights. She briefly addressed the crowd and participants on Zoom, saying administrators were asked to attend but not speak, before returning to her seat.

Complete silence enveloped the room as sexual assault survivors began to speak in person and via Zoom, with Hoadley-Brill reading anonymous submissions between speakers.

The Wash agreed to keep the identities of participants confidential unless expressly given permission to name them.

Each survivor recounted their interactions with the Title IX office and the GW Police Department piece by piece, laying bare years of inconsistency in the university’s practices and an unwillingness to bar or expel those found guilty of sexual assault.

Title IX is a federal policy that prohibits sex-based discrimination in any school or education program that receives federal funding.

I think we recognize that the Title IX office is absolutely limited by federal policy … but we also have to realize that the way cases are handled at GW have caused further harm for survivors.

Survivors said the reluctance to bar perpetrators from campus also applies to alumni and individuals who were never a part of the GW community to begin with, echoing   each other’s sentiment that “they have no reason to be here.”

GW student Abby Canning spotted her assailant, who is now an alum, in the student center last week and said she has now withdrawn from classes. She was only able to have him barred from campus for a semester after Title IX found him guilty of sexual assault, she said.

Survivors who spoke meticulously chronicled dates of meetings and what they were told by Title IX officers and GW police. Some students said they were “ghosted” after meetings with investigators, calling the office weeks later to discover their case had not progressed because an employee had left.

Others were told by Title IX that barring would be put in place pending the outcome of investigations, just to learn that it is up to the discretion of GW police to enforce it. As a result, outcomes have been highly irregular.

The final speaker joined from home via Zoom. She spoke about leaving the university a few weeks into school after she reported her assault to Title IX. She claims she was told by GW’s Title IX Director Asha Reynolds, “I can’t do anything unless they’re a bomb threat.”

The Wash spoke with Reynold’s at the listening session, and she said she had no comment on any statements made by students but would email if she changed her mind. The Wash heard nothing further from her office.

The frustration, disappointment, and fear in the theater were palpable, and administrators could be seen shaking their heads at some of the statements.

Still, solidarity was the strongest emotion. Speakers used their remaining time to thank each other for standing up, and as survivors returned to their seats, they were embraced by friends who came to support them.

Students stayed after the listening session and talked in SASA-facilitated breakout groups about policy changes that could benefit survivors. While some suggestions were made, students mostly became a resource for one another, explaining how certain policies work and recommending offices that were helpful.

The listening session comes a few weeks after a protest held during commencement, organized by student activists Canning and Stephanie Lee, who revived the hashtag “GW Protects Rapists.” The protest mirrored a 2017 commencement protest by then student Aniqa Raihan, whose rapist was found guilty but was still allowed to graduate. Raihan held up the sign “GW Protects Rapists” at the ceremony.

Canning and Lee met when GW’s Title IX office copied Lee in a confidential email to Canning this semester. After constant errors in their cases, Canning said this was the “last straw.”

Following a tedious investigation, Canning’s assailant was found guilty of rape by Title IX, but she was “frustrated the sanctions were so minimal.” He was only suspended for a semester and had to watch a TED Talk on consent, she said.

“Stephanie took the initiative to get the ball rolling and we’ve been working together every step of the way,” Canning said.

Lee’s alleged assailant had graduated, but she was denied a barring order despite him returning to campus for graduation. GW police told Lee they could send him a notice informing him he was barred from her building, but “then he would know where to find me,” Lee said.

Canning and Lee decided to adopt the hashtag “GW Protects Rapists,” starting petitions and an Instagram account under the name. Determined for the movement not to “fizzle out like last time,” Canning said the two women partnered with SASA to advocate for change.

SASA Co-President Shira Strongin, was a freshman when the original “GW Protects Rapists” campaign was started, and the university had a “sacrificial lamb” that they fired, she said.

“The campaign died down after that, so when Stephanie and Abby brought it up again, I knew I wanted to make sure we were here to support,” Strongin said.

SASA crafted a policy proposal and organized a listening session, Strognin said. “We’re kind of like the bridge between the students, admin, and ‘GW Protects Rapists.’”

“Where Stephanie and Abby have been really mobilizing the community, there’s only so much we can do as a student organization,” Strongin said. “But because of the ties that we do have to the administration, and the respect they give to us as an org, we can push for this kind of policy change.”

The SASA co-presidents drafted two policy demands for GW to meet, sending it to the administration in coordination with the “GW Protects Rapists” protest.

The main demand is for the accessibility, standardization and formalization of the campus ban process for non-GW community perpetrators, including alumni. The second demand would guarantee long-term funding for the Office of Advocacy, whose advocates are the only confidential resource on campus for students experiencing trauma.  It can recommend campus bans, provide academic support and help survivors navigate the criminal justice route, Strongin explained.

“The Office of Advocacy has been threatened with budget cuts and we have the foresight that this will become a continuing threat as we rebuild from the pandemic,” according to written SASA demands.

After the weekend of the protest and policy demands, SASA extended an olive branch to the administration by way of the listening session.

Hoadley-Brill said that SASA had already engaged in several productive meetings with administrators, as well as the GW Police Department on “beefing up” the policy barring non-GW community members from campus prior to the session.