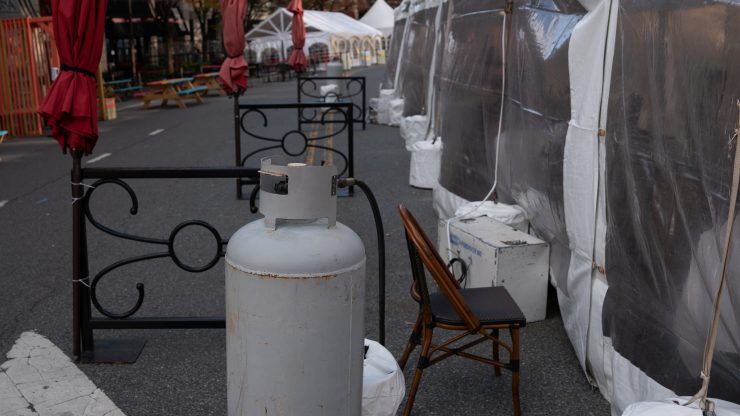 Large plastic tents and propane heaters are now the norms for restaurant dining as colder temperatures dissuade customers from outdoor dining. Downtown Bethesda’s Streetery is no exception. Though, businesses seem to be using heaters in a way that might make conditions dangerous.

As restaurants use their tables and chairs, treating tents they put up as private dining spaces, they’ve also put out propane heaters. Some of those heaters are right up against the walls of the tent, with the large gas cylinder only a few feet beyond that.

Electric heaters are a recommended solution from the county, but The Wash wasn’t able to identify any of the heaters as electric along the Woodmont Avenue Streetery. Electric heaters are the only type approved for use within tents, or just alongside them, as any open flame or fuel-burning heater is supposed to be five feet away.

Sitting at a table inside one of these tents, a patron might only be a few feet away from the heater themselves. While it may offer some temporary comfort from the cold, propane heaters are a major fire risk according to National Fire Protection Association code. A Montgomery County flyer that restaurants looking for resources online would see, specifically for “Covid-19 Safety Guidelines for Outdoor Dining Tents,” harkens back to the Hartford Circus Fire of 1944 as a warning.

That was a disaster that cost 164 lives and was instrumental in creating the NFPA fire code. That same code that has propane heaters at least five feet away from typical temporary structures, like the tents erected by restaurants. The code talks about both the tent material and the heaters, ensuring another catastrophe doesn’t occur.

Part of the problem is suspended registration and permitting for these kinds of structures.  On a safety flyer, the county said, “a formal permit will not be required,” and businesses only had to submit a form. If they registered, Montgomery County Department of Permitting Services has said they will still do an inspection.

The normal process seems to have been left behind from the start of the Bethesda Streetery for the sake of expediency though. The problem there is when the Streetery was established, Montgomery County agreed with Bethesda Urban Partnership to suspend a number of permitting requirements.

Susan Parker, a manager with Bethesda Urban Partnership, said, “Because we were partnering with the county, and they’re county streets, the blocks that are closed were approved by the county. They took care of the road closure for us and our job was to provide the tables and chairs and take care of the disinfecting of the tables and chairs after folks eat and promote the Streetery.”

In our investigation, none of those public right-of-way permits existed. Bethesda Urban Partnership is an organization established by the county to act as a management, development, and marketing arm for downtown Bethesda. They worked with the county council to open the Streetery, closing five different portions of a public street for restaurants to use.

According to Jeff Burton, the Executive Director of Bethesda Urban Partnership, “because the areas are in the public right-of-way, the County really wanted to make these areas kind of more like a parklet area,” where tables and chairs would be open to the public and used by restaurants.

In practice though, the vast majority of tables in the Woodmont Avenue Streetery are owned by the restaurants themselves. Walking along Woodmont Avenue, The Wash noticed each restaurant used their tables and chairs in the same way they would use any private seating. The expectation was that the tables were for customers. Counter to the open public gathering place, the tents had designated entrances and exits meant for guests. Tables crowed the sidewalk enough that trying to pass by meant getting close enough to reach out and touch someone’s recently arrived plate of food.

Trying to ride a bike from one end of the block to the other is nearly impossible, much less the ability to park a fire truck in the event of an emergency. The required minimum of three feet for pedestrian pathways doesn’t exist in a number of places. One restaurant has even gone so far as to erect small greenhouses to offer a private dining space.

The restaurants also didn’t seem aware of any permit requirements or public right-of-way requirements, only acknowledging that the street had been provided for them to use as part of their business temporarily. Montgomery County officials were willing to discuss the issues. Linda Kobylski, Chief of Land Development is Montgomery County’s Department of Permitting Services. “It was our roll to ensure things were installed safely,” when discussing the Streetery. “Propane should not be inside the tents,” she said. “That would be something I told them as well, when I meet with the businesses out there on Woodmont Avenue.” She stressed that only an electric heater could be used close to or under the tents.

But, Bethesda Urban Partnership seemed to have given back their responsibilities to the county of managing the Streetery itself. “There are a few individual restaurants that have some tents out on the sidewalks or within their own current outdoor dining areas. We as an organization haven’t put any tents out on street,” Parker said. “So they did have to work with Montgomery County to put those structures up.” When asked about the county’s lack of permit requirement, she said that restaurants still had to get approvals to erect tents.

Along Woodmont Avenue, the Streetery is a great experience. Now though, the requirements like fire department access, distance of tents or temporary structures from buildings, and many other points of safety seem to have been abandoned.

Despite a lack of enforcement, the county seems aware of the safety issues. They wrote a legal hold harmless agreement into their informal permitting forms. “The permittee agrees to save harmless the County from all liability arising from the use of the public right of way or installation of a tent for special outdoor restaurant seating” is written as the very first condition of the form.