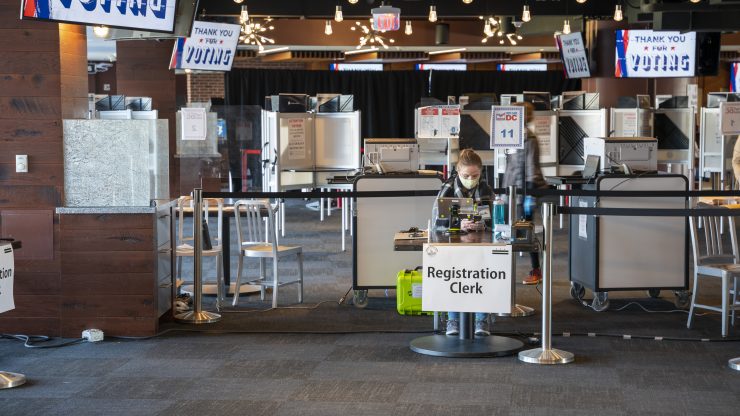 While the Nationals Park voting super center supported over 6,700 in-person voters since early voting started, only a couple hundred actually did so on Election Day.

This morning at Nationals Park was windy and quite chilly. Election workers had already been in position for the past week. They’ve had practice at their posts, helping voters through the process to ensure they’re accurately registered and their ballots were filled out.

The concourse had been made into a voting assembly line normally used by the PNC Diamond Club, a venue that costs $195 per game for front row seats on the field. The seats also must be purchased a year in advance. Today though, the club’s Edison bulb mood lighting gave voters just enough light to know what registration table they were being directed to.

As of 1 p.m., the count was only 314 voters though. According to Cheryl Tyler, the voting space opened at 7 a.m. expecting a larger crowd, the official in charge of the polling place. While a jump of adrenaline coursed through when the fire alarm went off in the first hour of voting, even that turned out to be a simple malfunction.

The efficiency of the voting place has overcome the expectation of the park staff as well. “They told us they were impressed by how quick we got through people,” Tyler said about the one, and only, time a line has formed out of the building. It was one the first day of early voting, and it lasted about 15 minutes. Since then, media, campaign supporters and special interests generally outnumber the voters.

A spokesperson for the Nationals confirmed that all of the venue time had been donated in non-partisan support of voting in the District.