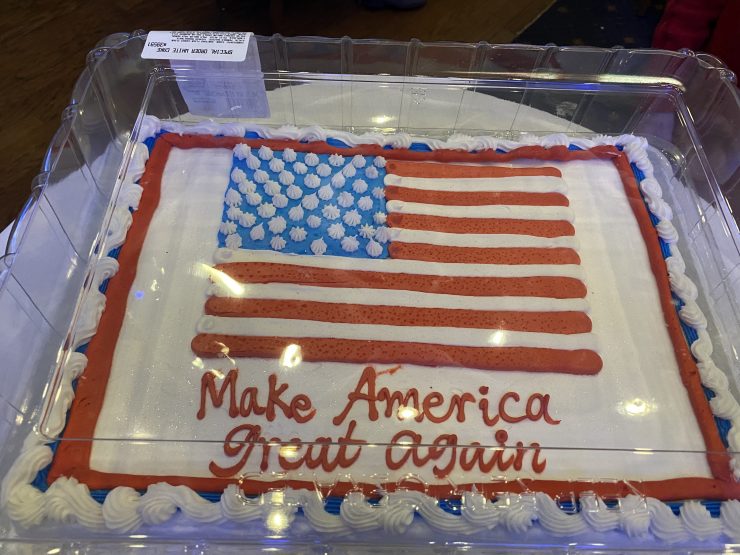 While other locations canceled their watch parties for COVID-19 restrictions, the Arlington Republican Women and Arlington County Republican Committee reserved a sports pub to watch the election results.

“I love our president,” Carole DeLong, 77 and former president of the Arlington Republican Women’s Club, said. “I’m Catholic so I’ve been doing a lot of prayers… for him and for all of us actually. But I can lose my temper when I see liars on the news.”

DeLong said that she and the other Arlington Republican organizations wanted a place to gather, have some drinks and celebrate the election results.

Due to coronavirus prevention measures in place, such as staying six feet apart and prohibiting more than 50 people in an indoor dining facility, most election watch parties around the D.C.-metro area have been canceled to avoid crowds.

One of these events includes a gathering at the Trump International Hotel in Washington, D.C., where President Trump planned to make an appearance.

“I’ll be perhaps between the White House and the hotel,” Trump told the New York Post when asked about his plans for Election Day.

One of the most recent White House events was the White House Rose Garden ceremony, where Trump announced his Supreme Court nomination of Justice Amy Coney Barrett. White House coronavirus task force member Dr. Anthony Fauci nicknamed this event a “super spreader,” since masks were not required and many attendees got infected with coronavirus as a consequence.

Some members of the cabinet plan to watch results at the hotel, while others plan to spend the evening at the White House.

Bill Bayne, who is 56 years old and one of the owners of the bar, said they had different groups reserve spots in the venue to be able to stay under the capacity of 250 per group in Arlington, Virginia.

One party attendee, John, who did not want to provide a last name and is 45 years old, said he believes we will still hear either late tonight or early tomorrow morning. He additionally said even though Pennsylvania will take a while to give full results, he believes Trump will get to 270 electoral votes faster than Joe Biden will.

“As long as he keeps Michigan,” he said, “he can lose Pennsylvania, which is 20, he can lose Wisconsin, which is 10, and he can keep everything else and be at 276.”

DeLong and Bayne explained that though they understand why people think that Trump is “flawed,” they believe his work shows more than his attitude and encouraged people to look at his record, “not at his roughness.”. “He’s from New York, for God’s sake,” DeLong said.

Bayne said that Trump being transparent, and being “qualified to run the biggest business in the world,” is what ultimately impressed him.

“I love a businessman running the United States of America,” he said. “We don’t need politicians, we need people that are competent to run a business, and I’m just very impressed with the guy. I think he’ll go down as the greatest president in the history of the country.”

Delong, along with Debbie Martin, 66, said if Trump loses the election, they fear the country will turn to socialism. Martin specifically said she fears the entire country being on Medicare, since her experience with Medicare was difficult and expensive.

“They want to run us from cradle to grave,” she said. “Like sheeples, they want to run us around and tell us what to take in school, what kind of job to have, you know, they just want to be in total control of our lives, and that’s not what the constitution and our founders fought and died for.”

DeLong, however, said she worries even if Trump wins.

“If he loses, God forbid, we’re going into communism,” she said. “If Trump wins, we’re all happy and blessed, but I think we’re gonna have riots, and tearing up the streets, and… it scares me.”