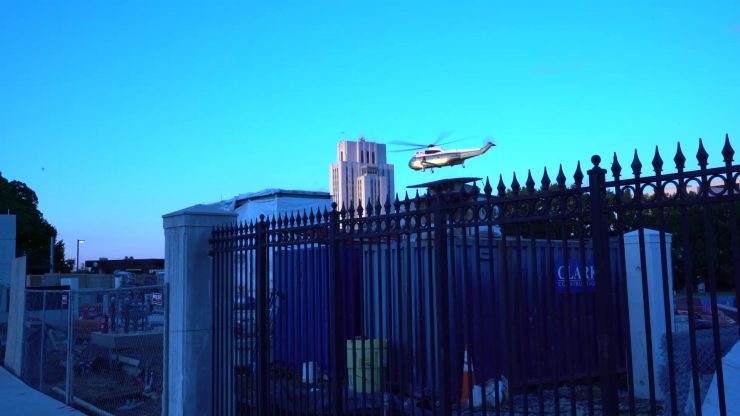 President checked in “as an abundance of caution,” said the White House.

Marine One landed at Walter Reed Medical Center in Bethesda Friday evening as a small group of onlookers pushed toward the secure military entry gate. Inside the compound, the crowd could see a mask-wearing President Donald Trump being escorted to the hospital for treatment after testing positive for COVID-19. Some onlookers chanted “Wear a mask!” and “Vote him out!”

Combined military and county police made announcements reminding the crowd that while the main street was public, the gate was on federal land. The officers created a barrier of caution tape and cones. They blocked all vehicle and pedestrian traffic for the east side of Rockville Pike just in front of the facility.

Michael Patrick, a Bethesda local who routinely runs in the area of Walter Reed, described the scene as surreal. “I mean, something like this is happening, curiosity strikes you, you want to see what’s going on,” he said.” “It’s a weird combination; obviously, it’s a big event, but at the same time, running through the area, you wouldn’t know anything is going on unless you’re in this intersection. Down the block nothings really happening, that way nothings really happening.”

Initial reports suggest that the President’s condition demonstrates a fever, chills, nasal congestion, and a cough. A statement from the White House said the President had received a single eight-gram dose of Regeneron, an antibody cocktail. It also said the President has been taking a list of daily vitamins before this.

“I’m going to Walter Reed hospital. I think I’m doing very well, but we’re going to make sure that things work out,” the President said in a video tweet moments before boarding Marine One, thanking the public for their support.

Cyclists, dog-walkers, students from many local universities, locals from the Bethesda area, and military service members on their way home from other facilities gawked at the site of a helicopter landing in the middle of D.C.

News crews from all around the world also scrambled to cover the event and set up on the western side of Rockville Parkway, with much of the curb crowded with news vans and specially customized SUVs. Teams typed furiously away on laptops as anchors squinted into their lighting. The metro station parking lot had been overrun and closed off long before the President landed.

Javaid Alin, who lives just a few blocks away, came for the spectacle and offered the President improved health. “I wish that he recovers,” Alin told The Wash.  He also noted a hint of frustration with Trump and the politics of the current pandemic. “I think he’s definitely mishandled the whole crisis, and I think, hopefully, this will give him something to think about, about the suffering that people have gone through and also the people that have lost their lives,” said Alin

Not long after Alin stopped talking, a large pickup truck revved by with a Trump support flag flying behind it. The passengers shouted, “Trump for President!” in an apparent effort to get the message recorded by the dozens of television cameras operating along the street.

As of this writing, the White House has said the First Lady has only shown symptoms of a mild cough and headache. The remainder of the Trump family has all tested negative.