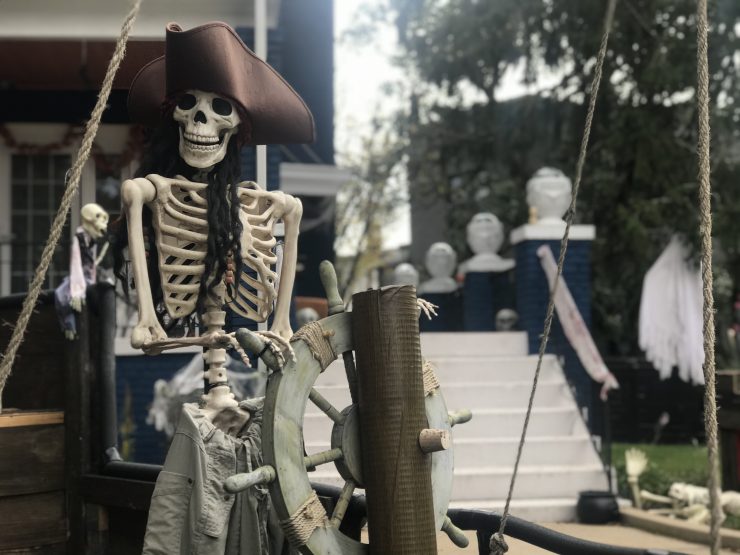 Drew Schneider said he thought maybe 50 people would be interested in his socially distant Halloween Parade. To his surprise, 425 people are slated to join in a Halloween costume parade in Sherman Circle on Oct. 31.

Schneider is the owner of Petworth News, a neighborhood news blog, which is the sponsor of the parade. Although Petworth has had a few Halloween parades in the past, Schneider said this year the community requested it, so the outlet sent a survey to parents last month to see if they had any plans or suggestions.

Schneider said the main takeaway from the survey was parents “wanting to ensure that kids could still enjoy Halloween considering the chances of a normal Halloween” are slim.

The parade will take place at Sherman Circle, starting at the Critten street entrance and ending at Illinois Avenue.

On Facebook and Twitter, Petworth News posted the link to reserve free tickets. Tickets allow kids dressed in costume to march alongside their parents in the parade and receive a sanitized bag of candy at the end.

Schneider said the reservations were a way to see how many people would attend the event. More than 100 parents registered 150 children within an hour of Schneider posting the registration.

Once sold out, Schneider decided to reopen registration, which sold out again by the end of the night. Petworth News capped participation at 425 people.

Unregistered people aren’t allowed to walk in the parade and bystanders will not be permitted in order to maintain social distancing. But residents are encouraged to watch from their porches.

Volunteer to help set up, direct participants, enforce social distancing & clean up at the end!

However, with such a large crowd, Schneider said his main focus is COVID-19 safety, which is why participants will arrive for one of four time slots to avoid overcrowding.

It will take each group no more than 10 minutes to complete their march and collect their candy, Schneider said. Then, the next group will begin.

Schneider said his event adheres to the Center for Disease Control and Prevention guidelines. Volunteers will be sure everyone is wearing a mask and are six feet apart.

Petworth resident and parade volunteer Clara Botstein said safety will not be an issue at this event.

“I know a lot of kids in the neighborhood look forward to it,” Botstein said. “And it’s the kind of event, based on what I’ve been reading, you can do safely.”

The modifications to the parade are an example of how the pandemic has upended everything from education to work life and now how we celebrate holidays too. Some Petworth residents have opted out of handing out candy in the name of social distancing. Others, like Botstein, are building a candy chute to limit the number of physical contact residents receive from each other.

“I think people will give some cheer and try to provide candy safely to the kids,” Botstein said. “I do think people are stepping it up given the conditions and the fact that people have been in the house a while.”

Botstein plans to attach cardboard boxes together to make a makeshift pipe and then slide the candy to children who will be waiting on the other side.

Julie Wineinger, Lulabelles Sweet Shop owner, will offer other alternatives. Located on Upshur Street NW, the shop has partnered with the Fourth Ward Mutual Aid to provide 150 candy bags for those who come for grocery pickup at the location.

“I’m a pretty strong believer that businesses who are working in the community should be helping and serving those people that are also helping you by coming into your business,” Wineinger said.

Wineinger will also give out candy bags for anyone who swings by the shop on Saturday in costume. She said the kids in the community deserve it after the year they’ve had.

“They’ve given up school, they’ve given up a lot of things, even just socializing and being out, so this is just a small thing to give them something special and safe.”