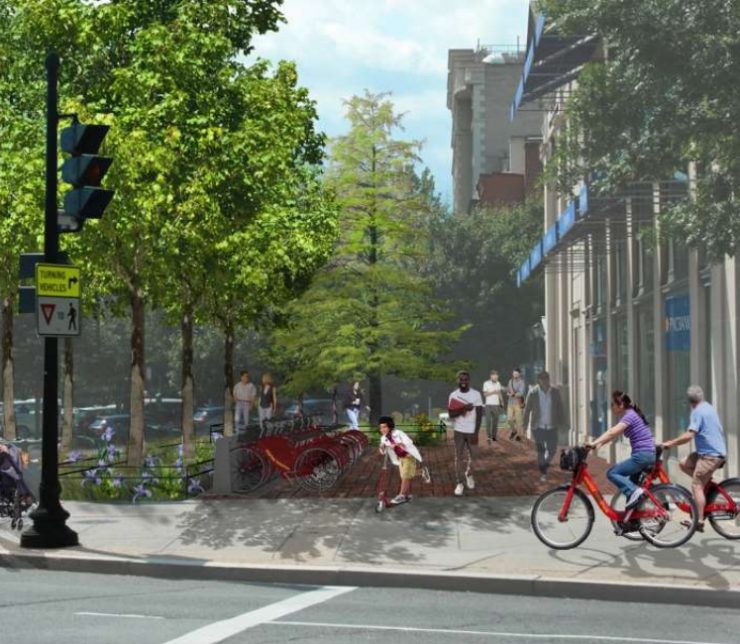 The sidewalk at 1913 Massachusetts Ave. used to have a row of street trees, offering shade in hot summer months and protection during the rain. The street address belonged to Stewart’s Castle, the home of Nevada Republican Sen. William Morris Stewart back in the late 1800s.

Now over a 100 years later, a PNC Bank stands in the same spot but the trees no longer exist. An all-volunteer organization, Restore Mass Ave, is trying to return this patch of sidewalk to its former glory through the Dupont Tree Plaza Project.

The project also seeks to add seven large, healthy trees in front of the PNC Bank, adding to the current five trees on either side. They also want to add new lighting to help people move around the area and see better at night.

According to a presentation by RMA President and founder Deborah Shapley at an Advisory Neighborhood Commission2B meeting, planting these trees will help prevent floods, unpleasant or harmful exhaust from cars and buses as well as help the problem of polluted watersheds.

Funding for the project comes from a $30,000 grant RMA won from the Chesapeake Bay Trust G3 program in March 2018.

The grant will cover engineering designs for the tree plaza. RMA is currently looking for more funding, as the project could cost up to half a million dollars.

Shapley said she would like construction to be complete by as early as next year.

The process, she said, is a lengthy one. The water pipes, electrical lines, gas lines and storm drains underground all need repair work done to them.

Multiple agencies are working on the final plan, which currently stands at 20 pages of engineer and design drawings and is about 90% percent complete, according to Shapley. After this, RMA can move forward with the next steps.

Shapley added this will be a green infrastructure project because contractors will use soil, which filters and cleans the water. Instead of a mechanical system, natural elements are used to do the work. The redeveloped plaza would also be able to handle heavier rain.

Dupont Circle sees 20,000 Metro users, 25,000 vehicles and nine Metro and Georgetown University bus lines each day, according to Shapley’s presentation at the meeting.

Community members, residents and local, elected officials are behind the project. When the Dupont Tree Plaza project was proposed before all nine commissioners of the ANC-2B in July, they unanimously voted in favor of it.

Dupont Circle resident Collin Savage said currently, the area is dangerous because of the lack of lights.

“It is a nice looking area, but it just seems like it needs some more added to it,” Savage said.

Dupont Circle commuter Devin Paige said his wait for the bus in the summer is not a pleasant one because of the current lack of shade.

“It feels like a sauna out here, which is not good for our health or bodies,” Paige said.