Francisco Marquez’s last job in Venezuela was as the chief of staff for a former mayor of Caracas, the country’s capital. Today, he heads a nonprofit organization based in Washington, D.C.

Marquez was imprisoned for traveling to Portugal to collect signatures in an effort to petition against  President Nicolas Maduro, Venezuela’s president and authoritarian ruler. Marquez belonged to the political party Voluntad Popular, or Popular Will. The progressive democratic party was founded by Leopoldo López, a prominent Venezuelan opposition leader who was imprisoned in 2014, but has since been moved to house arrest.

In a testimony before the Organization of American States, Marquez detailed his time in political prison. He said prison guards did just about anything to humiliate him.

“I was in a dirty dungeon, where there were mosquitos constantly. I got dengue and the food was limited,” Marquez said in Spanish. “They shaved me, forced me to sing the slogan ‘Chavez vive, la lucha sigue.’” The slogan translates to ‘Chavez lives, the fight continues.’

Marquez spent four months in prison and was released under the condition that he leave the country immediately, he told The Wash. Four hours after his release, Marquez and his family were on a plane headed for the U.S.

Marquez’s story of immigration parallels the experiences of millions of other Venezuelans who fled the country due to the unfolding economic and political crisis. “Thousands have left not out of their own accord,” he said, but instead to seek opportunities elsewhere. Human rights violations have also led to their departure, Marquez said.

Since 2015, nearly 2 million people fled the country and nearly 2.6 million are living abroad, according to the UN. The BBC reported that the U.S., Colombia, Chile and Spain accepted the highest number of Venezuelan migrants in 2017.

“Our history has always been a country that has received immigration, but right now we’re seeing this massive migration,” Marquez said. “It’s unprecedented in terms of its scale and impact.”

In 2012, Marquez helped found Visión Democrática, a D.C.-based nonpartisan, nonprofit organization working to integrate the Venezuelan diaspora in the U.S. with economic and social change efforts back home.

When it first launched, Visión Democrática focused on organizing the diaspora community around Venezuelan electoral issues and, at times, engaging in philanthropic and social efforts back in their country. Today, the focus has shifted, instead concentrating on promoting democracy, forming strong partnerships, and connecting the diaspora

Regardless of when they arrived in the U.S. or why, Venezuelan migrants want to remain deeply connected with their country, Marquez said. One way to ensure those connections is through face-to-face interactions.

Visión Democrática hosts events across the country to better understand the individuals who make up the Venezuelan diaspora. On November 27, it held a press conference in D.C. that examined crimes against humanity in Venezuela. Previously, it arranged a public discussion addressing the uncertainty about the country’s future and the legitimacy of Maduro’s presidency.

The group also partners with more than 120 nonprofit organizations around the country to further its mission, efforts and reach. One organization works with national and international partners to supply hospitals in Venezuela with medicine and medical supplies, another focuses on youth development programs to offer education opportunities for Venezuelan youth.

“Venezuelans around the world are very productive people,” Castillo said. Visión Democrática offers the opportunity to have a different conversation about Venezuelans, separate from discussions of hunger or crisis, he said. “We wanted to give another side to the Venezuelan community. The diaspora is productive, well educated and very entrepreneurial in spirit.”

Visión Democrática recently published a study detailing the demographics of Venezuelans who applied for a permanent U.S. visa between 2009 and 2016. Fifty-two percent of Venezuelans seeking permanent residencies in the U.S. have a bachelor’s degree, according to the study.

More than 27,000 Venezuelans sought asylum in the U.S. in 2017, according to a report by The Washington Post. Despite the high numbers, Castillo said many are eager to return to Venezuela. He said it’s “amazing to see the desires” of those willing to invest their social capital, time, resources and human capabilities to reconstruct their country.

As for Castillo and Marquez, they are eager to return. If there were a known return date, “we would already have our tickets,” Castillo said. 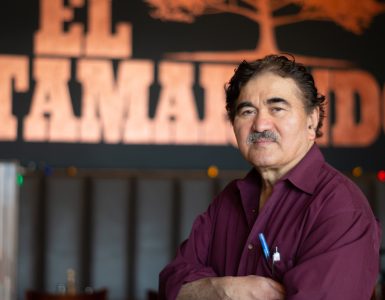