We sent our reporters to Columbia Heights and U Street this week, to learn how immigrant-owned restaurants are making their mark in the District’s renowned food scene.

The restaurant started as a bodega grocery store in 1995, and transitioned to a restaurant when Columbia Heights underwent redevelopment and a population boom in the early 2000s.

The Compres brothers say they hope to one day turn Los Hermanos into a national chain.

The Dominican cooks at Los Hermanos don’t use recipes. Instead, they cook from memory and by taste.

The Compres brothers say that customers come from as far as California for their authentic Dominican food.

Meat, rice, beans and plantains are the staples of most Dominican dishes.

Dominican players on the Nationals popularized Los Hermanos with their teammates.

Jose Flores, owner of El Tamarindo on U Street.

Flores opened El Tamarindo in 1982, only a few years after immigrating from El Salvador.

The restaurant serves Elotes Locos, or grilled corn on the cob.

Keren Restaurant, on U Street, began business in 1979.

Keren serves as a meeting place for district residents from Eritrea, Somalia, and Ethiopia.

Co-owner Tekie Ghrebrekrstos says their says days at the restaurant are, “really busy. We don’t have much break. We don’t have a day off. Everyday we make sure everything’s perfected.”

Keren takes its name after a famous city in Eritrea. The restaurant’s decor features the city’s lush hillsides and stunning mountain views.

Keren’s most popular dishes feature tal, a bean dip, and injera, a spongy bread used to soak up flavorful sauces. 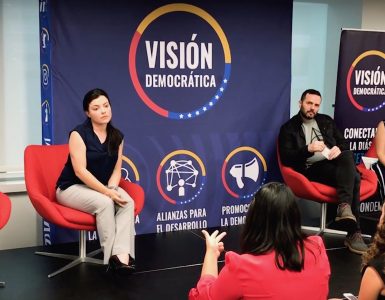 Francisco Marquez’s last job in Venezuela was as the chief of staff for a former mayor of Caracas, the country’s capital. Today, he heads a nonprofit organization based in Washington, D.C. Marquez was imprisoned for...