“We’ve got a runner!” shouted Andre Pitman, a pest controllist for the District’s Department of Health, as a rat scurried across the sidewalk into yet another burrow.

The city is waging a pest control battle on multiple fronts to deal with its growing rat problem. DOH’s Rodent Control team works on the front lines.

It’s an uphill battle, team members say. Rats build tunnels beneath soil and concrete, chew through garage doors and can squeeze through holes the size of a dollar coin, project manager Gerard Brown says. “You have to be smart to survive.”

Sylvia Cysiffary of Eastern Market says she regularly finds dead rats outside her home. She blames a nearby cafe that often leaves its dumpster lids open. Cysiffary runs a private Facebook page to inform her neighbors about the persistent rat problem.

Officials say Eastern Market’s rat population is the highest in the city, rivaled only by Adams Morgan.

In addition to traps, controllists manage rat populations by mapping underground rat tunnels with a chalk-like substance and then filling them with dirt.

The city will launch a rat sterilization program in the coming months. Until then, it’s up to the Rodent Control team to keep rats at bay. 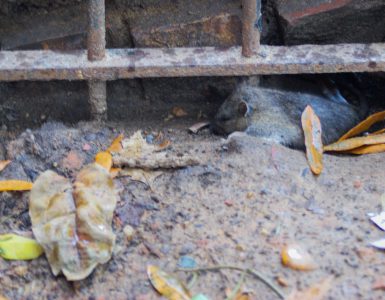