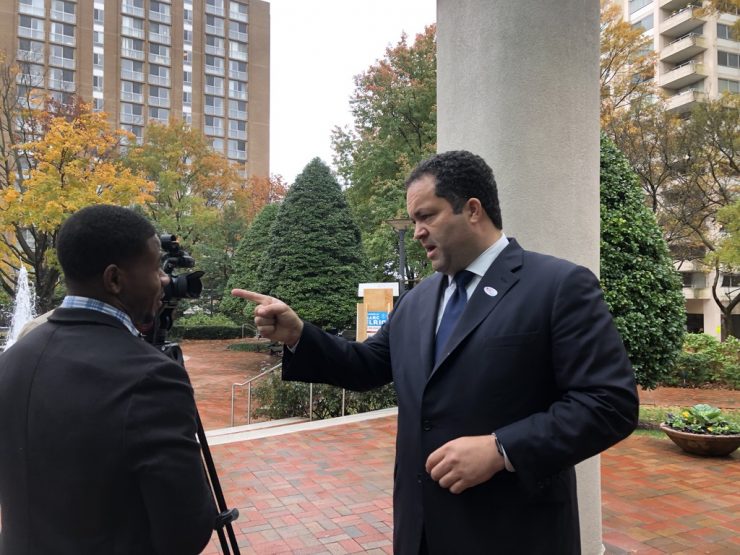 Ben Jealous, the democratic gubernatorial candidate for Maryland, made a stop at a polling location in Bethesda to greet voters on election day.

Jealous, a former president of the NAACP known for his progressive activism, made a last minute appearance in Friendship Heights.

The event was sparsely attended, but Jealous greeted a few supporters and spoke to a small collection of press.

Jealous is seeking to unseat Republican Governor Larry Hogan, who enjoys a broad base of support in the state. That support has translated to a substantial lead in the race.

Some polling put Hogan 18 points ahead of Jealous.

But Jealous isn’t ignoring that lead. Instead, he’s planning to beat the odds.

“We knew from the beginning that we were running up hill and that we’d be in a blizzard of negative advertising from governor Hogan and the Republican Party,” Jealous said outside the polling location. “With that said we have pushed, and what we’ve seen is we’ve won more and more voters to our side.”

Jealous had a come-from-behind victory in the state’s primary, upsetting what many polls saw as a safe race for opponent Rushern Baker. Now, he’s hoping that he can achieve result in the governor’s race.

It will come down to mobilizing supporters, according to Jealous. It’s an effort he’s been aided in by childhood friend, Dave Chappelle.

The comedian has been stumping for Jealous in the closing weeks of the campaign, calling voters in his home state of Maryland. Jealous hopes the extra enthusiasm before the ballot opens will help his campaign.

“We’re feeling very very good about our chances. So long as we have high voter turnout today, we will win,” Jealous said.

Keaneu Smith-Brown is a volunteer for the campaign. Like Jealous, he showed up to the polling location to raise last minute support and thank supporters for voting.

Smith-Brown was attracted to Jealous as a candidate because of his progressive platform, which calls for the legalization of marijuana and universal Medicare.

“I support Ben with all of my heart, soul and my spirit,” Smith-Brown said. “You’re talking about moving the state forward. Not staying where we are now.”

Not all voters were as enthusiastic about Jealous’ campaign.

Patty Cox was at the polling center to support his rival, incumbent Larry Hogan.

“He’s turned this state around. We were bankrupt, we were laying off people left and right… he came in and within two years he had money in the bank and everything,” she said.

She’s more critical of Jealous, whom she says is mismanaging the NAACP during his tenure as president. To Cox, Hogan is the more fiscally-responsible candidate the state needs.

Smith-Brown is more optimistic about his candidacy and what he can bring to Maryland.

Jealous said he remains confident in his chances of winning.

“I only plan for victory, and what life has taught me is that when you stay focused, push, you can win against the odds,” he said.