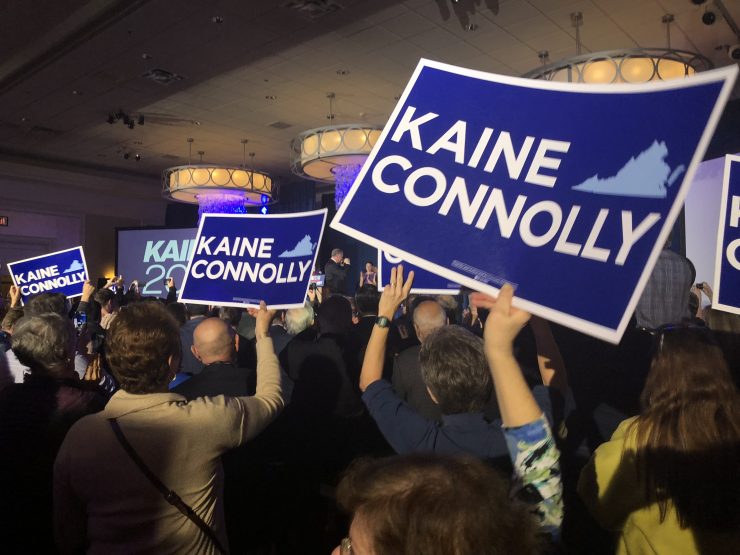 Democrat Tim Kaine didn’t have to wait long Tuesday night to see whether Virginia voters would be sending him back to the Senate for a second term.

Attendees at Kaine’s election night watch party at the Falls Church Marriott Fairview Park hotel had to wait about 30 seconds after polls closed on Tuesday for Kaine to be declared the winner. Unofficial results show Kaine defeating his conservative Republican challenger Corey Stewart, the at-large chair of the Prince William County Board of County Supervisors, 57 percent to 41.2 percent, according to The New York Times.

“I think tonight, Virginia showed who we are, and who we aren’t,” Kaine said.

Kaine, as well as the other speakers, emphasized the need to keep up the Democratic momentum in the state, particularly as Democrats may have a chance to gain control of both chambers of the Virginia. General Assembly. Democrats have not controlled both chambers since 1993.

The party attendees, the majority of whom trickled in after Kaine’s race had already been called, stayed huddled around the video boards to watch other races play out. Loud cheers went up when Democrat Jennifer Wexton defeated incumbent Republican Rep. Barbara Comstock in Virginia’s 10th district.

George Becerra, a Democratic campaign supporter, was one of the first attendees to enter the party when it began at 7 p.m. He said he heard the announcement the race had been called as he walked into the ballroom. With Kaine’s race in hand, Becerra said he wanted to see if a “blue wave” would sweep across the country.

“I’m here to see the results and hopefully a blue wave or at least a good blue splashing,” Becerra said in the first hour of the rally.

“I think the enthusiasm among young people has been very high in Virginia,” Black said. “We’ve seen reports of a couple places with almost near 2016 levels of youth vote turnout.”

Prior to election day, Kaine heavily campaigned for other candidates across the state and several speakers at his event, including Virginia Democratic Party Chair Susan Swecker, credited Kaine for helping the party make gains in Virginia.

In his victory speech, Kaine said the focus must now be on strengthening Democrats’ control in Virginia’s General Assembly.

“Tomorrow I’m going to rest, but starting the day after tomorrow we’re starting an effort,” Kaine said. “We’re going to win back the House and the Senate in Virginia in 2019.” 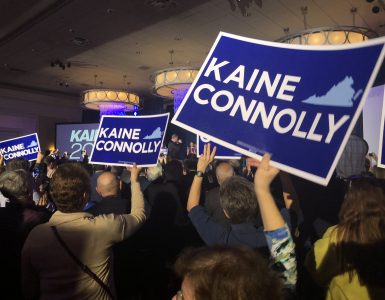 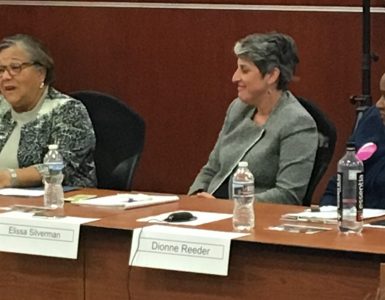