Wealthy and homeless residents try to coexist in the neighborhood with mixed results.

These populations rarely interact. When they do, results vary.

Kazimir McMahon, 27, and his mother, Dale Johnson, run Watergate Gallery and Frame Design on the neighborhood’s western edge. Since Johnson bought the gallery from its original owner 40 years ago, she and her son have seen the positive and negative changes the neighborhood has undergone.

McMahon said the neighborhood, which is primarily home to college students and adults older than 50, has become safer over the past decade.

“When I was probably about 14 years old, it was really sketchy down here, to the point where my dad was even wondering if we should get a gun because there were some not-so-great people that were hanging out around here,” McMahon said.

Although fewer homeless people hang out near the gallery since the public library in the Watergate complex closed, McMahon said he doesn’t attribute feeling safer to that shift.

Down the street from the gallery, dozens of people line up every morning for breakfast at Miriam’s Kitchen, which provides nutritious meals and housing support services to people experiencing homelessness.

Johnson works with Tony Palmer, a homeless artist who frequents Miriam’s Kitchen. She said she has sold several of his pieces for his profit.

“I’m happy to be able to help him,” Johnson said. “He has a camera, he takes pictures, he gets them made and he does paintings at Miriam’s Kitchen. He’s a good guy.”

People who are homeless sometimes come into the gallery and look at the art, Johnson said.

“They used to have benches out front, and this homeless guy used to sit there,” Johnson said. “He loved looking at the art and he sang. He had a beautiful voice. I just got used to him being there.”

Johnson said she has never had a problem with him or any other homeless visitor. But one day in 2005, she came back from a vacation and decided she was sick of having the homeless man outside her shop.

Johnson made a phone call and asked for the bench to be moved so the homeless man could no longer sit in front of the gallery. When he next came to the shop, Johnson said he was upset the bench had been moved.

“I told him, ‘Gosh, they went and moved the bench on you,’” she said. “I didn’t want him to think that it was me, because maybe he would have reacted in a negative way. I felt so bad.”

George Washington University sophomore Jillian Wolons serves as president of Student Neighborhood Advocacy Core, a group dedicated to involving students in the Foggy Bottom and District communities. This year, she is planning the annual Thanksgiving lunch with St. Mary’s Court, a low-rent apartment complex that provides subsidized housing to residents age 62 and older.

“Conversations with these residents, it makes their whole week,” she said.

St. Mary’s is directly across the street from Miriam’s Kitchen, and residents and guests regularly cross paths. Philip Schrefer, 80, has lived at St. Mary’s for five years and is an Advisory Neighborhood Commission representative for Foggy Bottom. ANCs are District residents’ first line of defense when combating neighborhood problems.

“I’ve always been aware of the homeless,” Schrefer said. “I see them having meals nearby at Miriam’s Kitchen. I actually took a meal there myself once.”

Tension can arise in ANC and Foggy Bottom Association meetings where fighting homelessness is the focus, Wolons said.

“There are members of the Foggy Bottom community that regularly attend ANC meetings that are very, very wealthy and hate that we focus on homelessness because they just want it to not be happening,” Wolons said. “They find those people to be taking up space in their community, making noise and just a disturbance overall, for the people living there.”

Mark Blankley, known as “Huckleberry Finn” in the neighborhood, is a lively, 38-year-old homeless resident who frequents Miriam’s Kitchen.

“They have art therapy every day,” Blankley said. “All the bums in D.C. can come get a hot meal for breakfast here.”

“I play music,” Blankley said. He regularly attends art therapy at Miriam’s Kitchen and performed during his interview “in the spirit of Miriam’s Kitchen.” (Whitney Petralia / The Wash)

“They usually accuse me of being drunk and call the cops,” he said.

Streznewski said a friend of hers who is not homeless but panhandles to pay for his home told her a story that made her cringe.

“This kid is talking to his friends, and they’re laughing and everything, and they go over, and he reaches into his pocket and… and Kenny said there were like hundred dollar bills in there,” Streznewski said. “But he reaches in and pulls out a penny and gives it to him.”

Streznewski said many students do try to combat homelessness in Foggy Bottom. The problem, she said, is newcomers are impatient to solve the problems and lack real knowledge of past efforts by other groups.

“There’s a lot of energy,” Streznewski said. “It needs to be harnessed.”

Streznewski said many people experiencing homelessness avoid shelters because of bad conditions. She recommends people stop by a shelter and see what it’s like.

She said she has seen many residents project fear and prejudice against homeless people because it makes them question their own security.

“One resident at the Watergate told me flat out, ‘I pay too much in taxes to have to look at this,’” Streznewski said.

The Community for Creative Non-Violence on D Street is one of the better shelters in the District, Streznewski said, but it’s still “horribly depressing.”

“Just the idea of sleeping there and getting up in the morning to go to work,” she said, her voice trailing off. “And it’s amazing how many people do that.”

Johnson said the homeless artist who sells art at her gallery avoids shelters.

Dale Johnson, owner of the Watergate Gallery and Frame Design, said she thinks twice before she takes a parking space near Miriam’s Kitchen. (Whitney Petralia / The Wash)

“He chooses to live on the streets,” Johnson said. “He doesn’t want to go into shelters and stuff because he doesn’t like the conditions of shelters, so he makes his choice.”

Wolons and Streznewski described a tactic lawmakers are considering to tackle health and sanitation issues homeless people face. While Miriam’s Kitchen provides nutritious food, building public restrooms throughout the neighborhood would give homeless residents a consistent place to wash and bathe.

“The first place I ever had roasted duck was here,” Blankley said, pointing to Miriam’s Kitchen. (Whitney Petralia / The Wash)

Proponents of the change have created model cards listing the locations of the restrooms, intended to be handed out to homeless residents. The cards would also note the available storage space in each restroom, since many homeless people carry their belongings with them, Wolons said.

“If other countries are doing it, we should already have it here, too,” she said.

The bill has been introduced but not revised or voted on. Since it’s the end of the two-year council period, when legislation must be introduced and voted on, Streznewski said she doubts the bill will survive.

“I consider the people who are homeless in this area just as much members of the community as the people with houses,” Streznewski said. “They live here for the same reasons that we do.” 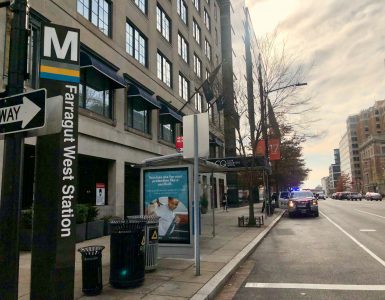 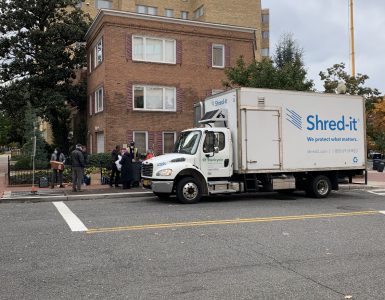 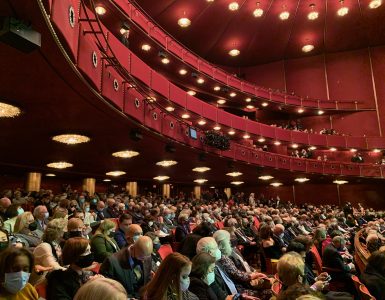