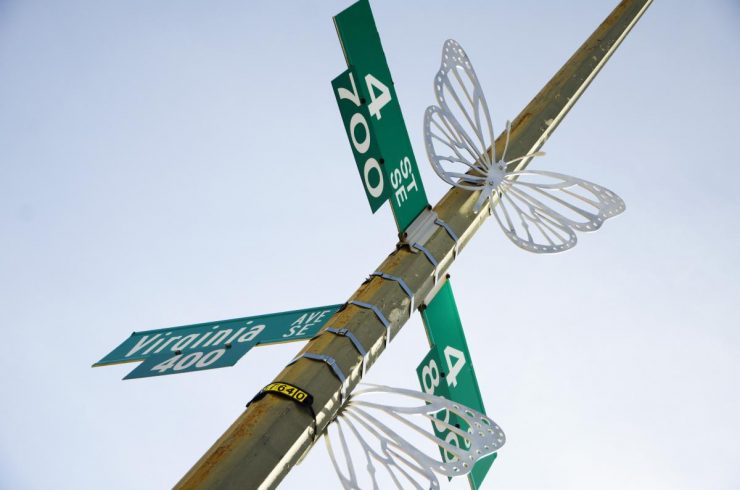 The neighborhoods of Woodley Park and Cleveland Park are slated for a new public art project centered on endangered animals. Organizers hope it will highlight their connection to the National Zoo and become a hub for community events.

Endangered animals will decorate the streets of Woodley Park and Cleveland Park as part of a public art project aimed at building community and raising conservation awareness.

The Endangered Animals Art Project will consist of 10 sculptures placed on lamp posts along Connecticut Avenue, each depicting an endangered animal local to the region.

“We want it to feel as local as possible and really relevant to where we are because public art has to do with where we’re situated,” project manager Hannah Jacobson Blumenfeld said. “We want to honor that and reflect that in the sculpture.”

The District’s only endangered species — the Hay’s spring amphipod — is currently the one animal confirmed to be featured in the project. A tiny freshwater crustacean shaped like a shrimp, it is found exclusively in Rock Creek Park.

The amphipod is colorless and semitransparent because it lives mostly underground, although the upcoming sculpture may take some liberties with its pigment.

“That’s sort of our mascot because it is very, very specific to Rock Creek Park,” Blumenfeld said. “Which feels special and important to showcase that.”

Carolina Mayorga, the project’s lead artist, is creating the Hay’s spring amphipod piece. The rest of the artists have yet to be decided but they will all be local residents like Mayorga. Blumenfeld said an artist interest form would go live this week and a panel will be organized later to choose the creators.

The project’s organizers plan to complete installation around fall 2023. Each lamp post will have a unique QR code attached to it that leads to information on the sculpture, its artist, the represented animal and anyone who sponsored it.

One sculpture will be placed outside the Woodley Park Metro station, with another near the Cleveland Park Metro stop. The rest of the art will be located on the east side of Connecticut Avenue, the same side of the street as the National Zoo.

Blumenfeld said the chosen posts are spaced out evenly to create a sense of connection between the two neighborhoods.

“The idea of connecting neighborhoods through a walking path and using sculpture and art as a wayfinding mechanism is a really special part of this project,” Blumenfeld said.

CPMS Manager Cassandra Hetherington said the idea came from her wanting more public art in the area, as well as something to further connect the two neighborhoods to the zoo.

While the art project is divided between Woodley Park and Cleveland Park, WPMS Executive Director Robert Meins said the two neighborhoods both have the same interest in highlighting the zoo, which brings a lot of customers to local businesses.

The art project will also be a hub for community events. This includes scavenger hunts leading people to each sculpture and trick-or-treating at the lamp posts on Halloween.

Hetherington said she wants to have afternoon concerts at each installation with local musicians playing songs about animals. Meins said it would be “fantastic” to have an expert from the Smithsonian Institution or World Wildlife Fund deliver a talk about the endangered animals.

The project draws inspiration from the Alphabet Animal Art Project in Capitol Hill, which Blumenfeld also managed for CHAW. Installed in 2014 and expanded in 2020, it features 20 animal sculptures illustrating various lettered street signs in southeast D.C.

Blumenfeld said her experience with the previous installation helped her better prepare for the endangered animal project’s logistical requirements.

The art needs to be placed at a certain height on the lamp posts to avoid vandalism — the alphabet animal project’s original koala went missing soon after being installed. The sculptures must also be made with specific materials that last in the elements. They cannot weigh more than seven pounds because of wind, Blumenfeld said, but also need enough holes so air can blow through.

The project is currently in the fundraising stage. Hetherington said the organizers need to raise a little under $20,000 before applying for matching funds from the DC Commission on the Arts and Humanities. Fundraising efforts will focus on both individual donations and larger business and nonprofit sponsors.

The organizers will host fundraising events next year, including a trivia night in February run by Capital Trivia, Hetherington said. Prospective players should expect some questions about endangered animals.

“I think after two and a half years of the [COVID-19] pandemic, people really want to be involved in something that is positive and that brings people together,” Meins said.