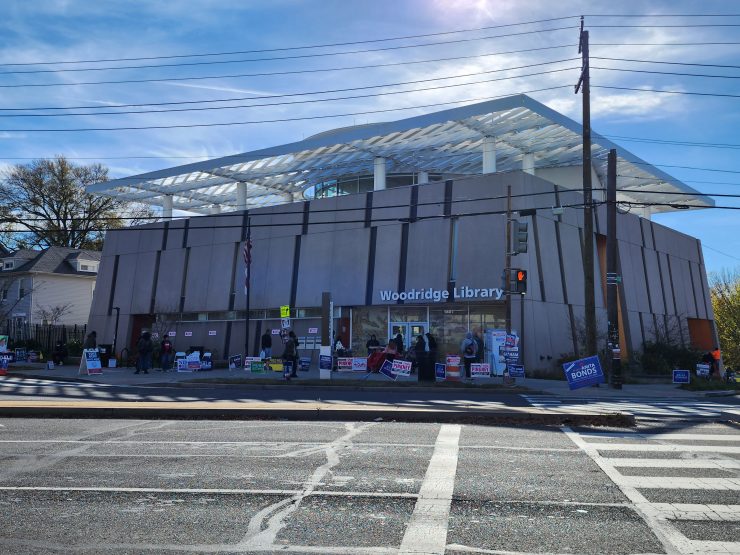 Mayor Muriel Bowser this week broke ground in Adams Morgan on a project that will convert a large, vacant commercial building on Kalorama Road, NW into a multi-family affordable housing complex.  But the state of affordable housing across D.C. remains a contentious issue for the city’s voters, a concern reflected in comments this morning from voters at the Woodridge Library in Ward 5.

“Democracy brought me here to the polls today,” said Noma Faison. “Democracy is something that allows us as voters to be able to make decisions to make sure that everything is enabled to help people. It allows them to be able to get jobs; young people can go out and get jobs with assistance … They need food, they need shelter. They need electricity. They need water. They need gas, and maybe help with their utilities and rental rates. Now, there’s no rent ceilings.”

Faison isn’t the only voter with concerns about affordable housing access.

“The prices are just through the roof. People who can afford it are even going to be priced out if [rent payments] just keep rising,” said Edward Robinson.

According to Robinson, “politicians and people in power making decisions that help the people” might be able to make a difference. “You have to monitor and be aware of how you treat the people in your communities and provide for them.”

Akram Abdul-Khalek said he understands the need for development, but he adds that the people who live here should be able to stay here and that housing should be affordable to them.

Referring to Bowser’s track record on affordable housing, Abdul-Khalek said, “I think she’s a little more about development and making sure, you know, her supporters and developers in the area make money.”

Perspectives from voters at the library on the availability of affordable housing in D.C. ranged from in good standing to nonexistent. A shared concern was barriers to access.

For Nurya Saffron-Bey, inefficiency and barriers to information keep affordable housing from those most in need.

“I’ve had the opportunity to work with several women through domestic violence, in advocacy. And affordable housing seems to be a major concern, a major issue, here in the city [as well as] lack of access to it,” said Saffron-Bey.

Residents have to navigate an endless circle of people to get clarity and answers for things like specific dates, Saffron-Bey said. “It just seems to be a long, drawn-out process.”

“It’s kind of like one person passing the buck to the next, you know what I mean? And then maybe, finally, you get to someone that has enough compassion to say: Okay, well, let me see if I can help this person,” she said.

Andrea Burks agreed. The D.C. homeowner said, a problem she has noticed is that, while housing is available, the information is only advertised to a few, so vacant units get snatched up before a community in need of access is even able to hear about it.

“They need to share that information,” Burks said, so that the distribution of affordable housing access is more equitable.

Like Burks, Saffron-Bey said that the “people at the top are not necessarily communicating with the people who actually need the services.”

This becomes a problem because sometimes services are available, but people never get them or a deadline to access them passes, Saffron-Bey said. It is important that “the people at the top” are communicating with people at the grassroots level so those who really need the resource will be able to access them immediately and not months down the road, she said.

Uncontested candidate for Advisory Neighborhood Commissioner Vijay Kumar said, “The amount of our city that falls in the category of less desirable is diminishing, which also means that private developers are going to have a lot of pressure to renovate the existing housing stock.”

“And as a result of that process, you end up with new a lot more new housing as a proportion of our housing, which means that we have less affordable housing. And I think that is the crux of the problem that most folks have,” Kumar said.

“We need to hold developers accountable and hold the D.C. government accountable for its voucher system, for its inclusionary zoning occupying system, Kumar said. “We also do need to just be building more expediently. We need to unlock more of our land for construction of homes besides detached houses.”

Darin Burks said a lot of people in D.C. cannot afford some of the new homes in the city because so many appear to be high-end condos.

“And they just put all of the underprivileged and the low-income people in the same location, which causes all issues that’s going on – shootings, stabbings, robberies, thefts,” said Burks, referring to crime that is often associated with low-income housing areas.

But Jackie C., who asked that The Wash not use her last name, said there’s a solution to crime plaguing areas where low-income housing develops – the government should go a step further in providing for more than just access to affordable housing by also integrate community recreation areas – particularly for youth, who “need an outlet, in a way, to get out some of that anger and frustration.”

These voters all agreed on one thing – that affordable housing is a necessity.

As new Ward 5 resident, Juita Martinez, 29, said, “I just think it’s a human right to be able to have housing and to have shelter, and everyone should have access to it.”