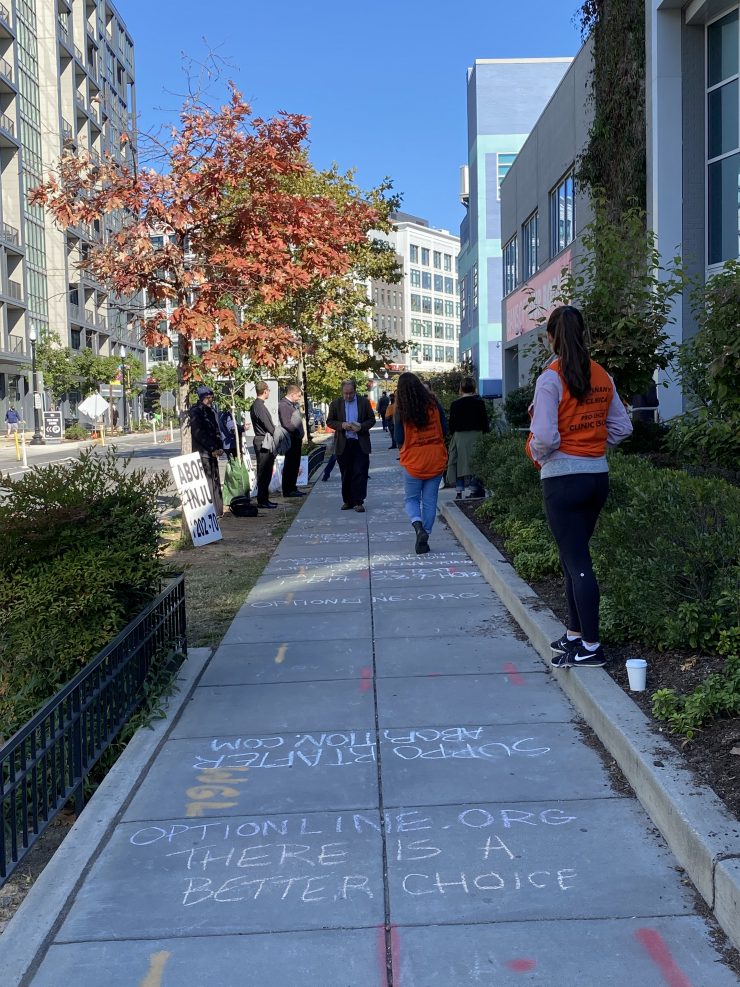 Atmosphere around abortion issue tense in the District as midterms approach

Months after the fall of Roe v. Wade, the battle for reproductive rights in the District still rages.

Just over a mile from the U.S. Supreme Court, which overturned Roe v. Wade in June, the battle over abortion rights is still being waged on city streets.

On a crisp October morning, the Planned Parenthood at 4th Street Northeast in the NoMa area, had advocates on both sides of the issue lined up along the pavement out front. The Carol Whitehill Moses Center of Washington, DC center offers a range of healthcare services including primary care and abortion.

On one side are anti-abortion activists––around 10 of them––standing around holding up signs or praying. On the other are volunteer escorts from the Washington Area Clinic Defense Task Force. The volunteer escorts were primarily women, identifiable by their bright orange vests with the wording “pro-choice clinic escorts.” According to the task force’s brochure, the escorts’ goal is to “promote peaceful and safe access to clinics for both patients and staff” and provides a “non-violent buffer” between the anti-abortion activists and the health center.

There are chalk messages scrawled on the concrete sidewalk between them. “Mothers and fathers regret abortion,” read one missive, while another said, “There is a better choice.”

And then there is the silence, a palpable tense quiet between the nearly 20 people this day.

The stillness outside the healthcare provider was only broken when someone exited or went in. One of the escorts walked the person back to their car or the next street while a protester tried handing out material supporting their cause. It’s a scene that repeated every time someone left or entered the health center.

Some passersby thanked the escorts for “being out here” and “doing what you do.” Others chuckled and said they were just going to Trader Joe’s a few feet away.

It’s a tension reminiscent of the mixed emotions around the country since the fall of Roe.

Signs of the times

For one of the anti-abortion protesters outside the clinic, who would identify herself only as a resident of Maryland, it’s her first time back on the sidewalk after the fall of Roe. Before that, she was here every week, she said.

Others like Lori Furstenberg have been coming out here for months. Furstenberg, who’s a former Democrat, described herself now as a “political activist, Republican, and a pro-lifer.”

For most hours outside Planned Parenthood, Furstenberg held up a sign that said, “Everyone deserves a lifetime. Say no to abortion,” showing a fetus in the womb. She said that people “just need to know my sign that I usually hold up.”

“It’s just that simple,” she added. “I usually don’t engage with people other than saying ‘good morning, you matter.’”

Michael New is the leader of this particular pre-election, anti-abortion vigil for “40 Days for Life” outside the clinic. He is not new to these circles and has been involved in the anti-abortion movement for years. While the street-level organizing is something he’s still expanding in the District, New said that the Republicans had had their larger focus elsewhere.

“I mean, one thing that pro-lifers have certainly invested very heavily in, and I think pays some big dividends, is judicial nominations,” he said. “That’s kind of the one thing, more than anything, pro-lifers want from people we elect is getting like-minded judges on the Supreme Court and other lower courts.”

Lately, “the other side has seemed to kind of be a bit more organized than previously,” he acknowledged.

Planned Parenthood of Metropolitan Washington, DC, turned down an interview request for this story.

Earlier in October, exactly a month before the midterms, a “Women’s Wave” demonstration, organized by the Women’s March, was held nationally. In the District, it began at Folger Park and the large crowd marched down to the Capitol to rally ahead of the upcoming elections.

While the District has always been one of the sanctuary cities for abortions and access to reproductive healthcare, the Supreme Court’s ruling has rejuvenated the fight for abortion rights.

“We’ve had an increase in people wanting to join us,” said Megan, a volunteer trainer with the task force who requested her last name not be used for security concerns.

She stressed that the escorts outside Planned Parenthood are not “counter protesters.” But a patient’s interaction with a protestor is up to the individual.

“That’s their choice; we emphasize choice,” she said.

A new swell of support

The D.C. Abortion Fund has also had an increase in volunteers post-Roe, said Devin Simpson, the fund’s communications director. “We haven’t quite figured out exactly how to use them all yet.”

Simpson also said there’d been a swell of support for the fund from local businesses and the community.

“I mean, like the weekend Roe fell, I was monitoring our social media, and it was difficult to keep up with the amount of ad-hoc fundraisers going on across the city,” she said, referring to random restaurants and bars.

Elsewhere, more events centered around reproductive rights, have been organized with the proceeds going to various abortion funds.

At the Dupont Underground on Oct. 22 and 23, Duke and Duck––a D.C-based creative content studio––staged a multimedia show for reproductive rights. The walls of the abandoned tunnel featured 16 unique animations from artists around the country. Katrina Soohoo, a Los Angeles-based motion designer, was one of them.

“Because, you know, we can read about facts,” Soohoo said. “And it’s important to know about facts, but sometimes it takes sort of like some emotional significance to really make it hit home for people.”

With the upcoming elections, while abortion is still protected and legal in the District, the fact that it is not a state still puts it at risk for the future, explained ACLU-D.C. Policy Counsel Melissa Wasser in an email statement.

“The midterm elections across the country could significantly impact abortion in the District,” the statement read. “On the other hand, a Congress committed to democracy could grant D.C. statehood, and as a state, District residents and lawmakers could protect and expand our status as an abortion safe haven.”

Back at the Planned Parenthood in NoMa, at around noon, everyone on either side of the pavement is packing up to leave. As New and the others gathered their material and carried away their signs, they stopped for a quick selfie in front of the clinic before parting ways.

“Will you be back here again next week?” Furstenberg is asked.