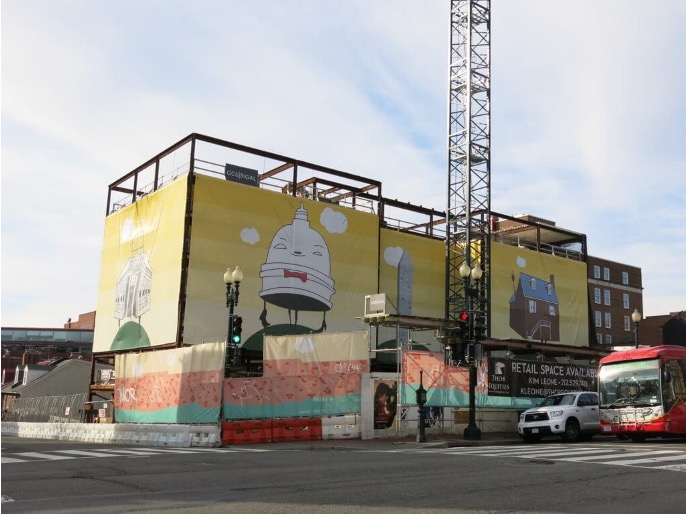 With the D.C. Office of Zoning to vote on 3000 M St.’s planned unit development (PUD) application and map amendment this December, the ground could be broken on a new hotel with attached retail space as early as 2023.

Georgetown’s Advisory Neighborhood Commission and the D.C. Office of Zoning will decide the fate of the neighborhood’s abandoned construction site, 3000 M St., NW this December.

Thor Equities, the owner of 3000 M St., will need a planned unit development (PUD) application and a map amendment to rezone the site. The application is the last approval the company will need before it can start construction.

The proposed structure is a hotel consisting of 100 rooms with approximately 10,000 square feet of attached retail space. It will stand at about 64 feet tall.

Georgetown Business Improvement District President and Chief Executive Officer Joe Sternlieb told TheWash that Thor is planning on starting construction as soon as it gets through the entitlement process with the Zoning Commission in December. Thor Equities would have an order drafted in January, finalized in April or May, and acquire permits to start construction in 2023. 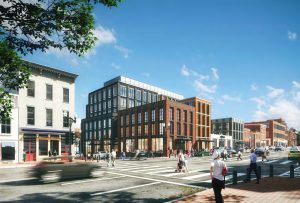 Sternlieb said that, in the case of Thor Equities, time and money delayed the process. Since Thor acquired the property in 2016, construction costs and interest rates have gone up, and consequently, so did the cost of borrowing money.

“Thor says they want to develop it themselves. They want to do a luxury flag on it. That’s what they say, but I’ve worked with developers for almost 35 years. And I will say, it’s one thing for what they intend, it’s another thing what they do because the sand is always shifting under their feet,” Sternlieb said.

Sternlieb said Thor could intend to flip the entitlement of the property as was the case with District-based developer SB-Urban, who bought the property in 2013 after the closing of the old Latham Hotel and sold it to Thor after realizing its costs were too high.

“I think a lot of people right now are over their skis. They’ve got more money invested in their projects than they can get out of them. And so, they’re gonna stay in until they can get their money back, but things change,” Sternlieb said.

ANC Commissioner Lisa Palmer echoed the sentiment, telling TheWash that the economy has shifted since Thor Equities first started to pull together its concepts, which has created challenges for the developer.

“Financing is a different proposition now than it was when we first started, and there are standards that need to be met in Georgetown that sometimes butt up against financial goals for applicants, and finding the balance there can take a while,” Palmer said.

At a previous ANC hearing in July, Zoning Commissioner and National Park Service Designee Peter May objected to the height of the building due to neighborhood regulations and the building’s proximity to the C&O Canal. Others considered the years the property has sat undeveloped and the facility’s new profit will bring into the community. 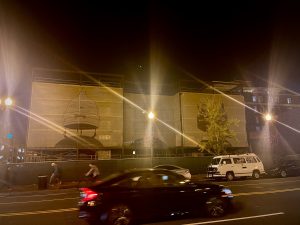 The property has been vacant since 2012, and in January 2021 the ANC passed a resolution classifying 3000 M St. as a “blighted property,” defined by the Department of Consumer and Regulatory Affairs as an “unsafe, unsanitary, or otherwise determined to be a threat to the health, safety, or general welfare of the community.”

The DCRA approved the motion to categorize the set as “blighted.” However, the property is currently categorized as “vacant.” Both categorizations come with higher property taxes, to put pressure on the owner to expedite actions moving forward.

In a statement to the Georgetowner in 2021, Palmer said that the ANC wanted the project to happen, although, until construction begins again, the tower crane on the site at the time needed to come down.

Palmer stressed in her interview with TheWash that the tower crane had been an issue with the vacant construction site for many years, with residents concerned about it swinging over M Street during storms.

Although it was never considered dangerous, the tower crane was removed in March 2021, marking a significant construction halt for Thor Equities.

The company cited a loss of retail tenant commitments as the reason for the stall in proceedings but was determined to move forward with the project.

“Nobody wants to live in a neighborhood with essentially a full-size block being a hole in the ground with, dilapidated fencing around it. People are very frustrated, and they’re eager to see something be built”, Palmer told TheWash.

If Thor Equities were to break ground next year, a new hotel could be added to the Georgetown landscape by 2025.